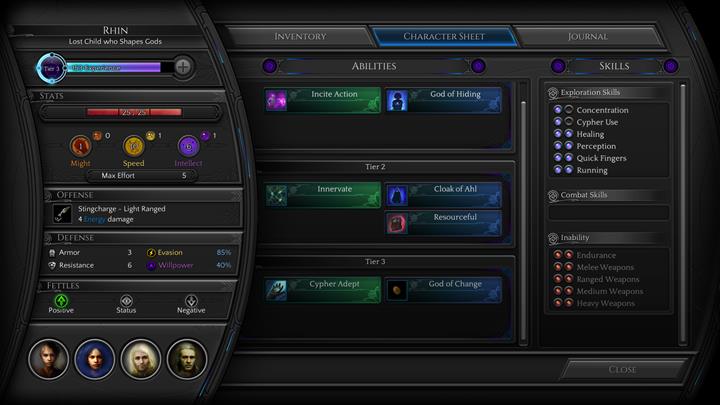 After some time Rhin gains some very valuable skills.

During the Beloved Slave quest in the Sagus Cliffs, you will encounter a little girl named Rhin. Early in the game she only gives you trouble. She is slow, her maximum strength pool equals 1 and she has very little resistance. In combat she is useless and very frequently she will fall after a few hits. However, after some time she becomes stronger and becomes a very strong, full-fledged pillar of the party.

Once Rhin reaches second tier, she can learn Innervate which enables her to heal selected targets. It is a great opportunity to teach her that ability and transform her into a healing character. Additionally, you should strengthen Healing exploration skill so that this ability becomes more effective. As it is widely known, an effective healer is the base of every group of adventurers.

Another thing in which Rhin is better than other companions is her ability to use the cyphers. She has very good skills based on increasing the number of these devices she can use. In addition to that, on tier 3 Rhin can learn the Cypher Expert skill thanks to which she can use a specific cypher twice during a fight. It is worth adding that halfway the game the cyphers are becoming very powerful and a chance to use them twice in a battle is very helpful.

Important: The next paragraph contains description and a video with a major spoiler related to Rhin and the culmination point. If you don't want to spoil the surprise, remember only that in order to greatly strengthen Rhin in Bloom you should send her away: you must talk with Aen-Tozon twice and let her walk away through the portal.

Additionally, at some point of the game you can "send" the girl away... thanks to which she will return close to the end of the game as a much more powerful character. You will meet her again as a grown up woman who trained her combat skills for many years. Rhin will also gain the ability to summon powerful constructs and to manipulate gravity. Additionally, she will have a strong ranged weapon and rich statistics pool.

Summarizing, Rhin is a very interesting character which at first is useless, after a while becomes useful, and at the end of the game becomes a very strong. You should definitely give her a chance, even though at first she might give you trouble.