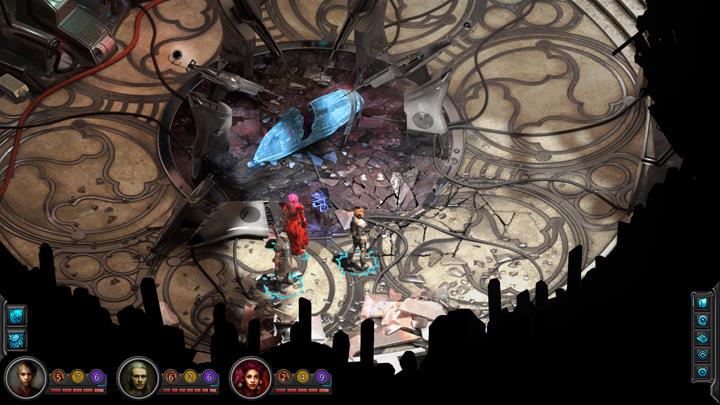 Aligern and Callistege are encountered at the beginning of the game but you must make a choice - which one of them is to stay in your team.

In the beginning of the game you come across two characters: Aligern and Callistege. Both are Nano and share a very turbulent past. Shortly after that, they start to argue and the consequence of that event is that you must choose who stays by your side. Sadly, you can't have both Aligern and Callistege in your team at the same time. They were once lovers, but their world views are so far apart now that they can't be together anymore.

This is your first difficult choice so you should really think it through. Both characters have their pros and cons.

Aligern is cold and arrogant but behind that mask, he is a good person. He is a fallen priest with a difficult past. Aligern is a Nano specialized in drawing the power from his tattoos. He can heal others, remove negative statuses and fight in close combat using a heavy hammer. He is a good addition to every team, a perfect support and a loyal companion. He can also become a good tank, which additionally strengthens the party.

Callistege is a cold and calculating woman that only cares about her own goals. She is not emphatic and for a long period of time her motives are not clear. Like Aligern, she also is a Nano, although her specialization is destructive magic. Callistege can use powerful "spells", including area of effect spells, which means that she can be very useful in many fights. Additionally, she exists in many dimensions at the same time, which allows her to teleport or dodge many attacks. It is worth to add her to your team if you want to have the support of a powerful mage, although you may have to keep your wits about you when she's around.

Aligern and Callistege are both among the best-written characters in the game. The final choice on who to recruit is yours.