Murdens
They're guarding the slave block. You can pay them 65 shins for being able to enter, intimidate them or try to attack them (they'll flee to the main chamber).

Murden Lair
The Murden Chief is here. You can have a standard conversation with him or you can attack him. A defeated chief lefts behind a key helpful in opening other rooms in the prison.
You can attempt to pick up the murden standard which will start the fight. You will obtain Artaglio's Standard (quest item).

Skoura's Abode
Skoura doesn't have a face and therefore she's blind. You can help her in restoring her sight as a part of the "What the Winds Took" side quest.
Don't take away Skoura's jar, because you'll die permanently!

Cell with Memovira's thugs
It's closed. You can open it by using one of the skills or the key taken from the Murden Chief.
There are two of Memovira's thugs from the "Rumblings of Discontent" side quest here. You can help them escape (also talk to Zebbak - 4XP).

Locked door
You can open the door by using one of the skills or the key taken from the Murden Chief.
You will meet Shinwise. You can talk to him and let him go or use Speed to trap him again after finding out that he's a murderer.

Room with the Maw
After entering the room a battle with Corpuscular Maws will commence (unless you'll escape). You can engage them alone or (better idea) with the help of your team. After you've defeated the monsters a maw leading to the murden treasure trove will unlock (M17.8).

Morden treasure trove
The Maw leading to the treasure room becomes active after defeating the monsters. The treasure room contains a lot of shins, valuable artifacts, a new merecaster and the black metal frame (quest item).

The map above depicts the Old Slave Block area, part of the gigantic living organism known as Bloom. The block is inhabited by the Murden; you'll stumble upon them as early as near the entrance to the area. You can gain access to the block by paying, intimidating, or eliminating them. The area itself contains some characters related to various side quests. What's more, you may want to spare some time to find the murden treasure room, where you'll find a significant amount of shins and some valuable artifacts.

1. The Murden. They are guarding the entrance to the slave block. You can pay them 65 shins to gain entrance, use Intimidation, or try to attack them (in which case they'll run for the main chamber).

2. Murden Lair. Here's where you'll find the Murden Chief. You can talk to him, use Intimidation, or attack him (the battle is an easy win as the murden are puny opponents). Defeated, he leaves a key that will open several rooms in the block.

You can try to steal the murden standard, which you'll find nearby the chief, leading to a battle. You'll acquire Artaglio's Standard (quest item).

3. Skoura's abode. Skoura has no face and, as a consequence, she's blind. You can help her regain her sight in the course of the side quest What the Winds Took. Note - Do not take the jar from her, or you'll die permanently!

5. A cell full of Memovira thugs. It's closed. To open it, you need to use a skill or the key, which you may have taken from the murden chief. Inside, you'll find two Memovira thugs related to the side quest Rumblings of Discontent. You can help them escape (you should also talk to Zebbak, one of the thugs, to gain 4 exp).

6. Locked door. To open it, use a skill or the key from the murden chief. Inside, you'll find Shinwise. You can talk to him and let him go or, once you learn that he's a murderer, use Speed to lock him up in the same cell you've found him.

7. The room with the Maw. Once you enter the room, you may have to battle Corpuscular Maws (unless you escape). Engage them alone or, which is a better idea, as a party. Having defeated the monsters, a maw leading to the murden treasure trove will open.

8. The Murden Treasure Trove. The maw leading to the treasury becomes active only after you've defeated the monsters. Inside, you'll find numerous valuable items, the most important of which have been listed below. 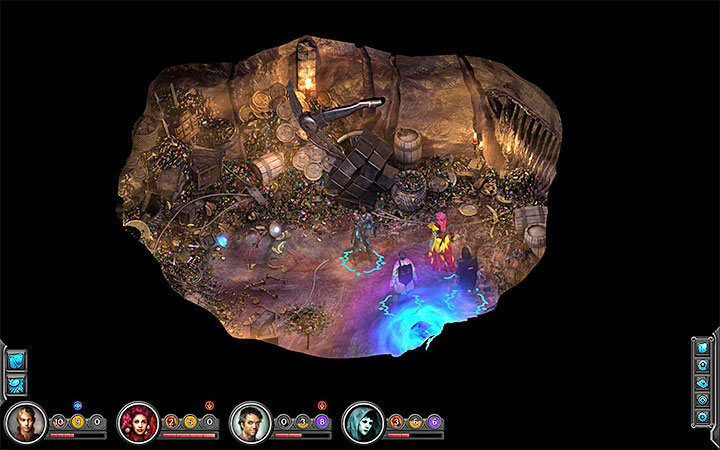 Interact with the Maw to enter the treasure room

The murden treasury contains, aside from shins and sellable oddities, the following unique artifacts:

Inside the treasure room, you'll also find a pickaxe, which you can examine and use Concentration on to gain 15 exp. Then, the game will give you the option to steal 180 shins, but if you decide to do so, your character will be affected by Demoralized fettle (stat penalty until next rest).