Ioxu's Shanty
Inkpot (Bloom cultist) is standing in front of the shanty and you can receive the "Anathema" side quest from him.
There's a pool nearby. You can drink water to earn XP and to get the Bloom Juiced fettle (drinking again will kill the main character).
Ioxu is inside the shanty. Meet with him as a part of the "Anathema" side quest. You can also trade with him - he's selling usable items, cyphers, ranged weapons, cloaks and bonded items.

Shrine of Chila
You can talk to Walks-without-fear in front of the entrance.
The Observant Speck - You can use Anamnesis on her and talk to her about Chili, about Walks-without-fear (+2XP) and about a job for Coty ("Freedman" quest). She's also offering rest - it costs 45 shins per person.
Later in the game you can talk to the Speck and open a Maw to The Gullet (map M23) as a part of the "Into the Depths" main quest.

Merchants
You can find out from Grisseler and other merchants that the trading post was swallowed by the Bloom ("Dracogen's Price" main quest) and that you will have to find a different route.
Later in the game (while visiting the Trade Post) you can unlock a new passageway here.

Group of armored people
You can unlock the "Marooned on an Alien Shore" side quest by talking to Arechi.

Cyst
You can examine it and touch it. Take part in the vision and don't try to escape it. Repeat this action after the first vision is over. Eventually the cyst will erupt and an Abykos will escape from it (you'll also receice some XP). Examine the cyst's remains to find the Mesmeric Handle and to unlock the "A Hilt Without a Blade" side quest.

M20  Passageway to: Trade Post. It can only become available later - after you advance in the "Dracogen's Price" main quest and unlock the passageway during your stay in the Trade Post.

M23  Portal to: The Gullet. It becomes available later - you must open the Maw as a part of the "Into the Depths" main quest.

Attention - Ioxu's Shanty and Shrine of Chila are tiny locations and they don't have separate pages devoted to them in our guide. They were only described on the map below.

Place to rest in The Vast Interior 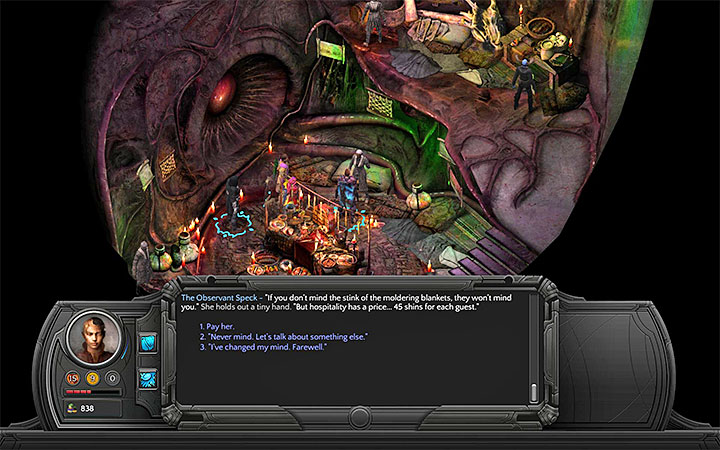 Talk to the Observant Speck about getting some rest

To organize some rest, you have to get to the Shrine of Chila, which is located in the western part of the Interior (M16.2). Talk to the Observant Speck. She will demand 45 shins per head (a full party will have to pay 180 shins).

Other key locations in the Vast Interior

1. Ioxu's Shanty. Before the entrance you can find Inkpot (Bloom cultist), who can offer you a side quest, Anathema. Beside him is a water reservoir. You can drink from it to get XP and obtain the Bloom Juiced fettle. (Drinking again will get you to the Labyrinth).

Inside, you will find Ioxu. You have to meet him to get the Anathema quest done. (If - according to the wishes of the Bloom cultists - you want to assassinate Ioxu, mind the construct controlled by him, and consider sabotaging the device in the center of the Shanty).

2. Shrine of Chilia. Before entering the shrine, talk to Walks-without-fear.

The Observant Speck - you can use Anamnesis on her and talk to her about Chilia, Walks-without-fear (+2PD) and job for Coty (quest Freedman). She can also allow you to rest - for 45 shins a person.

In the latter stage of the game, you can talk with the Spec and open the Maw leading to the Gullet (map M23), as part of the main quest: Into the Depths.

4. Merchants. From Grisseler and other merchants you can learn that The Bloom devoured the Trade Post (the Dracogen's Price main quest) and that you need to find an alternative route there.

In the latter part of the game (after finding the alternative way to Trade Post and obtaining the Magmatic Annulet) you can unlock the passage here that will allow you to travel freely between the Interior and the Trade Post.

5. Group of armored people. Talk to Arechi to unlock the quest Marooned on an Alien Shore.

6. The Cyst. You can examine it and touch it. A vision will begin - don't try to escape it. Repeat the activity when the vision ends. The Cyst will explode and Abykos will escape from it (you will get some XP). Examine the debris of the Cyst to obtain the Mesmeric handle and unlock the side quest, A Hilt Without a Blade. It's a pretty important quest that will allow you to open Maws in different parts of the Bloom.