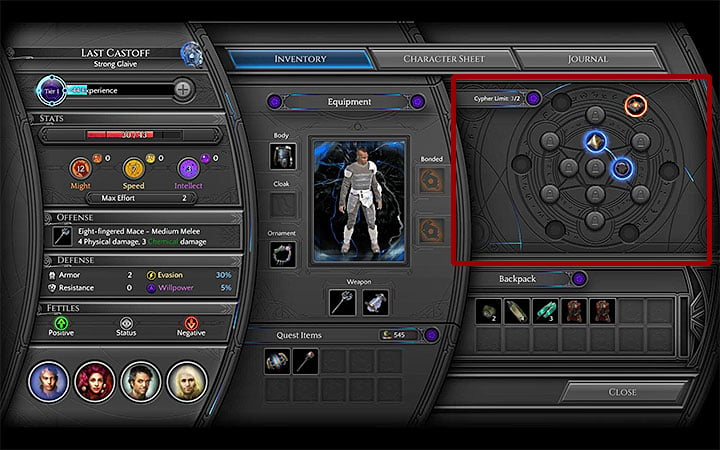 The sickness appears when you exceed the limit of cyphers

Cypher Sickness is one of more advanced mechanics of Torment: Tides of Numenera and it is directly related to the usage of Cyphers. A little reminder - Cyphers are powerful one-use artifacts. The Cyphers you find are automatically transported to a special place in your inventory, where they wait to be activated.

By default the protagonist can't have more than two active Cyphers (the limit can be different for our companions) and the sickness appears when you try to add another object of that type to your inventory. The limit of Cyphers isn't constant for the whole game and as your character develops and gains new abilities, it can be gradually increased. The Cypher Sickness equals receiving penalty to statistics of the character. Luckily, it isn't a permanent penalty but a temporary state.

Important note - The side effects of the Cypher Sickness are the more severe, the more you exceed the limits of ciphers. Equipping the protagonist with more surplus ciphers can lead to their death - it will happen if all the orange slots in the part of inventory dedicated to cyphers are filled. The protagonist will then LOSE ALL THEIR CYPHERS. Additionally, they will also land in the Labyrinth.

How to get rid of the Cypher Sickness?