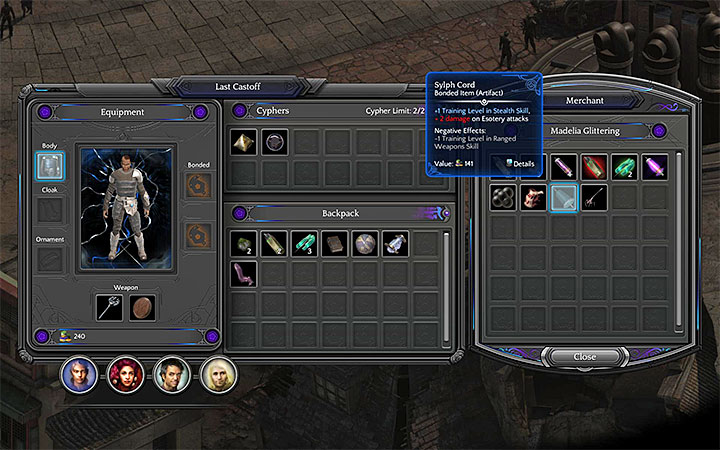 Bonded items are available, among other places, from some merchants

Bonded Items is an unique category of artifacts available in Torment: Tides of Numenera. These items can be found in the game world, you can receive them as rewards for completing quests and you can buy them from some merchants, such as Madelia Glittering from Cliff's Edge, Casmeen from Circus Minor and Mechela from Underbelly. 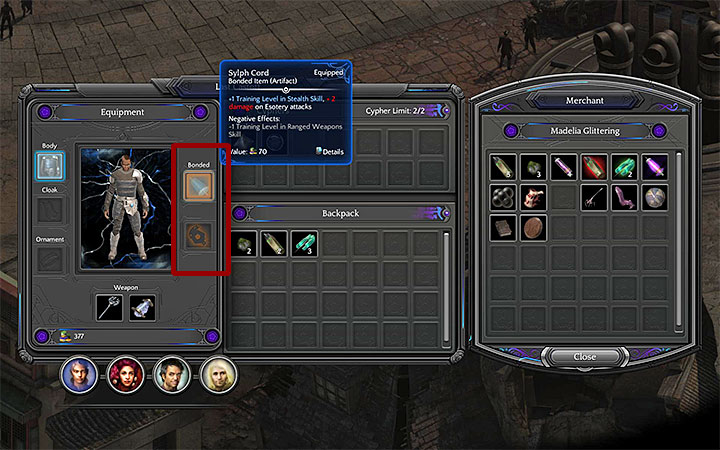 You don't keep bonded items in your inventory while waiting for an opportunity to use them. Instead of that, in order to activate a bonded item, you must place it in one of the special slots in your inventory. These slots are marked on the above picture. Each party member has two of such slots.

There is a very serious limitation related to the usage of bonded items. In addition to providing you with positive effects, they can have negative ones as well. The concentration ability of a character is the key factor related to that. It goes as follows:

The negative effects of bonded items vary. They can weaken the character's skills, reduce their effectiveness in using specific weapon types, make sneaking up harder or reduce persuasion abilities. Of course, you don't need to wait until you develop concentration at least to a trained level. You can select bonded items in such ways that the negative effects won't be very troublesome for a selected character. For example, a warrior won't be troubled with stealth penalty. Bonded items can be freely removed from their slots if a complicated conversation or a new fight awaits you.