Chose the protagonist's gender and talk to your own self.

The first choice in the game is the gender - it is really very important as it will influence numerous decisions in the game, so take your time with this one. Then you will start a conversation with yourself. You will be falling down - avoid diving head-on down and don't increase your speed, or the game will end. 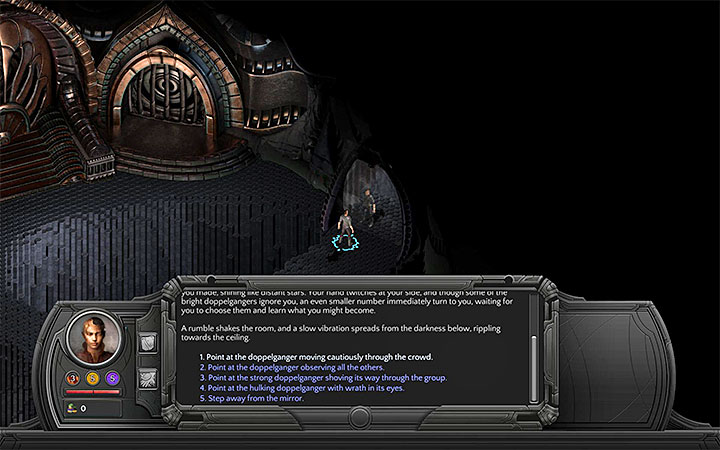 Approach the mirror and chose which doppelganger suits your taste.

When you get down, approach the bowl with liquid and try to move it using Might. If you succeed, the cave will become enlightened. If you hurt yourself when approaching to seize the bowl, the drops of your blood will land in the bowl and the cave will light up in red. Either way, go towards the first shining ball. It will project old memories - you will be able to conduct the events according you your own narration. Run towards the two remaining balls and repeat the procedure. This will unlock passage to the mirror - go there. Here awaits another important choice; you have to chose one of the doppelgangers, which you think is the best depiction of your character. After confirming your decision (this is not the final decision concerning the Descriptor of your character) the character creation tool will commence - create the character you want (some advice concerning the choice of classes and attributes can be found in a separate section of this guide). 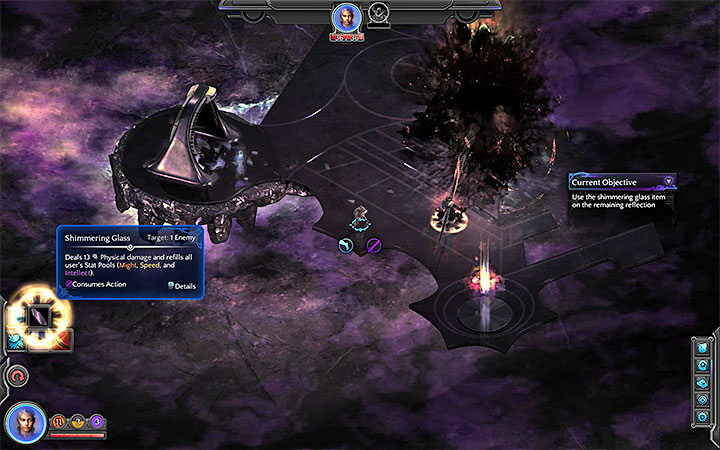 Chose a piece of glass from your inventory to defeat the last reflection.

When you're done, you will land in a chamber with specters. Talk to them about the circumstances and details concerning your fall. The conversation will be obstructed by a ghastly beast bearing a telling name, Sorrow. Now the game will proceed to a combat tutorial. Combat scenarios are called "Crises". The task is to attack subsequent reflections in order to free from the monster coiling clasp. Eliminating the last one may prove problematic, since the monster will put a fettle on it, which will provide it with reinforced armor that will be able to absorb standard damage. There is a solution at hand, though - pick a shard of glass up from the ground (press TAB if you cannot find it). The piece of glass is actually a cipher that allows you to deal a lot of physical damage. Use it to defeat the last reflection (you will get 40 XP and the action points will be replenished). Sorrow will disappear. Talk to the specter and go to the portal to end the prologue. After completing the prologue, you'll be taken to the Broken Dome (M1.1) and the main quest will begin - Fallen to Earth.