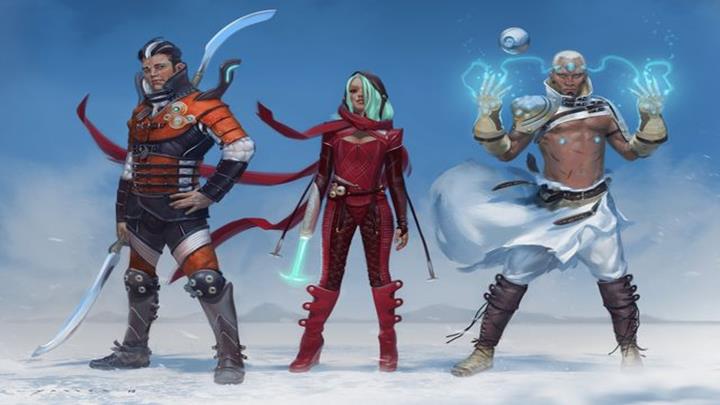 Torment: Tides of Numenera is a unique title when it comes to character classes - our choice boils down to just three classes. Each class is characterized by a completely different playstyle, as well as a unique set of statistics and abilities (which can be further set apart thanks to Descriptors). Depending on what character has approached the scene, we are left with different dialogue variations or new means of interacting with the environment. Finally, each class has a different approach to combat.

Glaive is a character class focusing on might and speed. This means it's a perfect class for players wanting to control a hero focused on melee combat, and possessing high durability. To further specialize in such area and be able to stand to future opponents, the player should invest in Might or Speed. Choosing one, dominating attribute depends on whether you want to control a warrior dealing powerful, albeit slow hits, able to absorb much punishment, or create a quick and nimble damage-dealer. It should be mentioned that aside from combat, your attribute set also counts in case of dialogues or interactions. More Speed means more options to choose from.

Some of the basic Glaive abilities are (you can unlock more later on):

Additionally, Glaive receives training in the chosen weapon school, increasing your chance to hit by +15%. The available schools are as follows: heavy, tactical (medium), light, melee, and ranged.

Jack is a hero who focuses on exploration, interactions with the environment, and other heroes. It's a class which often avoids combat, choosing any from the numerous other solutions. Our growth should be dependent on what abilities or skills are employed during interactions, and spend the points on them. When it comes to statistics, we should divide our points equally between the three pools. Jack has the greatest number of available abilities from the whole group. These skills are focused on increasing the chance of a successful interaction - a well-led hero can avoid almost all fights.

Some of the basic Jack abilities are (you can unlock more later on):

Additionally, Jack can hold more exploration skills that facilitate exploration and interaction with the world.

Nano is a class that could be compared to a mage from a typical RPG game. However, in this case our hero doesn't use magic per se, but is a skilled user of advanced technologies left over by previous civilizations, being one of few that are able to employ this power to advance their own ends. Nano has only three passive abilities that can be developed. These focus on learning and understanding of items and environmental elements. On the other hand, his active abilities are very useful, and interesting at the same time, allowing us to stop the attacking opponent, increase our defense, or simply being a helpful addition during numerous interactions found in the game. Scan Thoughts is a valuable skill during more and more challenging conversations with encountered characters.

Some of the basic Nano abilities are (you can unlock more later on):

Nanos also receive +15% chance of success of interactions influenced by either Mystical, Machinery, or Natural Lore.

The choice is yours - remember that your choice is permanent.