Tranquility's Rest
Idylla is running an inn here. You can use a chance to sleep and regenerate stat pools. The payment for using the inn is 20 shins for every team member. Exhaust all dialogue options to be put in a trance. You'll get XP (only the first time) and you'll return to the Labyrinth.

Master Rennio
You can talk to him to unlock "The Airship Thief" side quest.
Later in the game you can pay Master Rennio to take you to the Valley of Dead Heroes.

Central square
Omahdon - A man you can speak with to begin the "One True Love" side quest.
Silver Orphans - You can use Anamnesis or Concentration to try and communicate with them. You can deliver them proof of machines intelligence and receive valuable rewards in return.

Hair comb location
The place where you can find a hair comb, an item required for the "One True Love" side quest.

Bar
Syph - You can exhaust all dialogue options and solver her riddle to earn XP.
Tarnach Hobbes - Exhaust all conversation topics to get XP.

Cave of Last Words
You can get there while completing "The Cold, Calculating Jack" main quest. Matkina is hiding in the cave and you can recruit her.

Dome
You can solve a puzzle here (its solution is in another part of the guide) and unlock the option to teleport around the city. The only way to reach the dome is to begin in the Cave of Last Words.

The above map shows Caravanserai which is located in the southeastern end of Sagus Cliffs. Although not as full of points of interest as other districts, you can meet several non-player characters and start a few quests here. You can also find a tavern here that allows you to rest and regenerate character Stats. In the further course of the game, you can find an airship here and leave the city with it. From Caravanserai, you can go to two other districts: Cliff's Edge and Government Square. 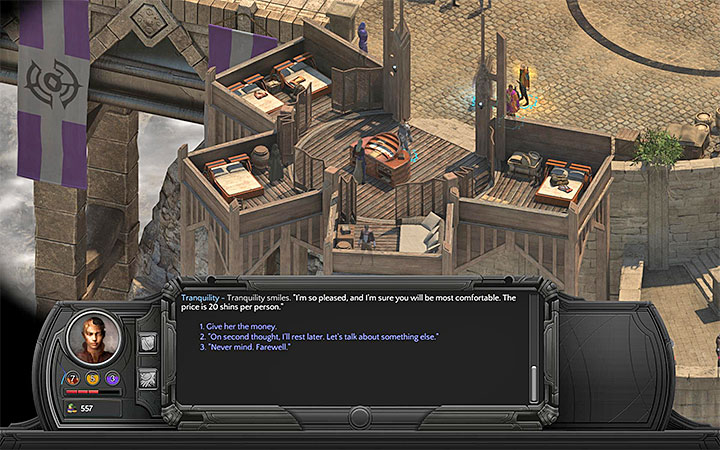 To rest, the party has to pay 20 shins per person.

Resting in Caravanserai is possible from the beginning of the game. After reaching the district, go to Tranquility's Rest (M7.1). Talk to Tranquility. Resting costs 20 shins per character.

Other key places in Caravanserai

1. Tranquility's Rest. Tranquility runs an inn here. You can pay for rest here, which will allow you to regain your strength. You can also ask the woman to put your hero in a trance. This will make you gain XP when you do it for the first time. Apart from that, it is an excellent method of returning to The Calm (the hero's mind) without having to kill your character, e.g. in combat with enemies.

2. Master Rennio. During the conversation, you can unlock the The Airship Thief side quest. In the later stages of the game Master Rennio can transport the team to the Valley of Dead Heroes location for a fee. This becomes possible after the side mission The Airship Thief and the main mission The Cold, Calculating Jack are completed. You will then meet the Master as part of the new main quest - On the Builder's Trail.

3. Central square. Omahdon is the person to talk to if you want to start the One True Love quest.

In case of the Silver Orphans it is worth using Anamnesis or Concentration, in order to attempt to communicate with them. Then you can begin to deliver evidence about the intelligent machines which you have encountered within the world:

6. The Cave of Last Words. You can only reach this location while completing the main mission The Cold, Calculating Jack. Matkina is hiding in the cave, and you can attempt to recruit her.

7. The dome. You can solve its riddle (the description can be found in another part of the guide) and unlock the ability to teleport around the city. The dome can only be reached from the side of the Cave of Last Words.