The means of unlocking the quest: Talking to Dhama of the Bloom in the Fifth Eye Tavern in the Cliff's Edge district (M10.2). 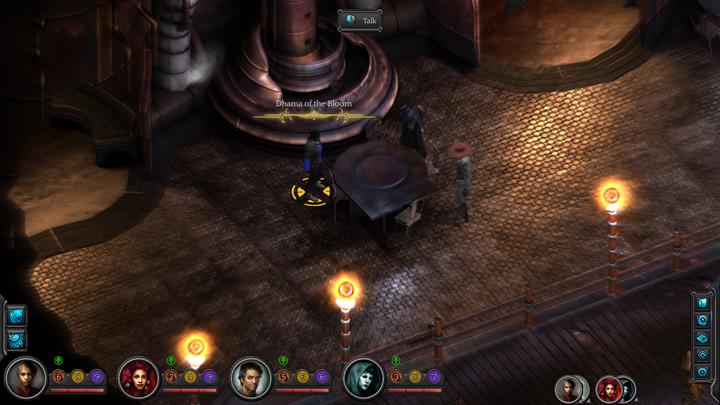 Dharma of the Bloom, the person with whom you must speak in order to start the quest.

You can start the quest by speaking with Dharma of the Bloom, a character located inside the Fifth Eye (M10.2). First you should allow the man to scan the mind of the protagonist. This will provide you with a permanent +1 intellect bonus.

Dharma is convinced that inside the Fifth Eye there is a creature called Adversary. You must find that creature. 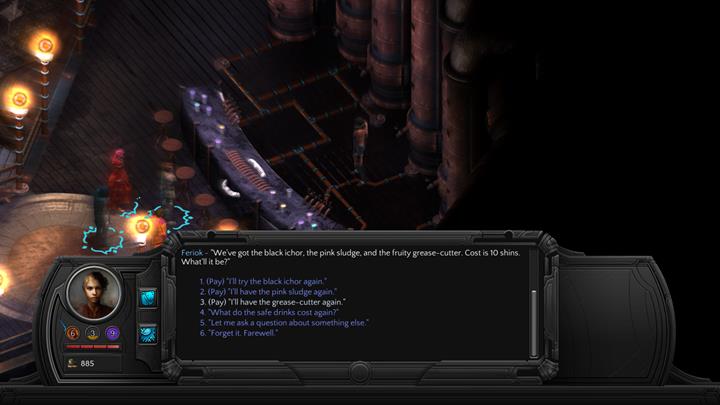 You must try all the drinks in the bar.

Finish the conversation with Dharma and go to Feriok. Ask about the dangerous drinks and try each of them (if you are taken to the sanctuary, use the portal to go back). Then go to the western part of the room (M10.2) where you will see a creature named Malaise. Speak with the creature about all the available topics. 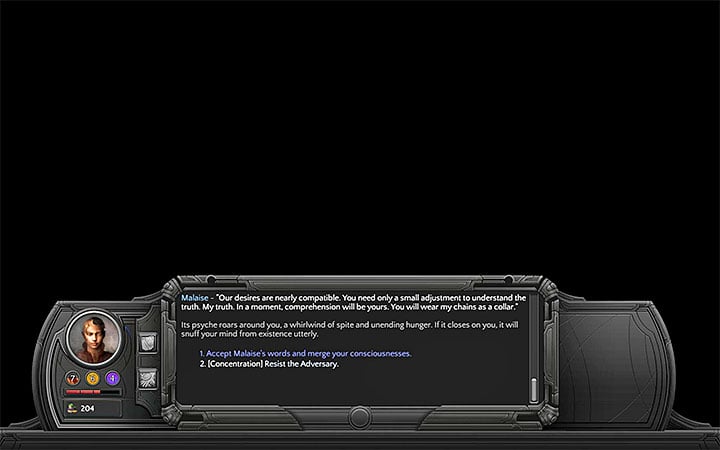 Do or die - defend yourself using Concentration

Talk to Dhama of the Bloom once again and tell him about the mysterious being. You can now decide whether you want to face Malaise alone, or stand as a team. The first variant will see you take part in a game that enables you to avoid a serious battle (described below). Unfortunately, the situation may end up in a permanent death, so save your progress.

Return to Malaise and agree to take part in his game. You'll be treated to a number of simulated situations - choose "normal" dialogue options or engage in effort rolls employing some of your exploration skills. Beware of choosing to sacrifice yourself or surrender, as this equals permanent death. During the ultimate conclusion, complete a Concentration roll to resist your adversary and make him dissapear. Talk to Dhama to receive 40 Experience Points and a Shadowstep, a powerful bonded item adding 50%+ to Movement Speed and +2 to Speed (-2 to Might) 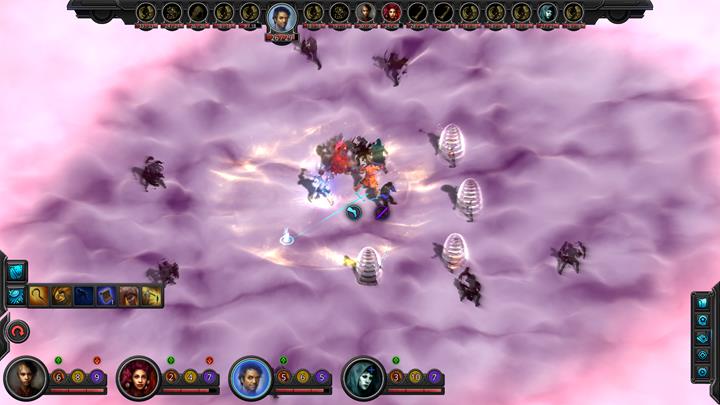 The battle with Malaise is long but rather simple.

The second variant (choosing to lead your party) equals doing battle with multiple reflections of the being. The beginning of the battle sees everyone except Dhama trapped in a force field and they will not be able to perform any actions. Fortunately this is not a permanent state, as when you progress to the later stages of the combat, your allies will be set free one by one, and they will be able to aid you in achieving victory.

Focus on the individual copies of the Malaise creature and attack them until they are defeated. Only then should you switch to the next target. It is also worth using area of effect attacks, as they will be able to connect with a larger number of clones. The Malaise clones will direct attacks at the Intellect of your team members and it pays to be prepared for this fact. Additionally, each time a copy dies, the other remaining enemies will receive a buff in the form of a psychic fury and will also heal a small amount.

When you deal with all the enemies a short conversation with Dhama awaits you, and afterwards the quest will be completed (you will receive 40 XP). Talk to this character again in order to receive a powerful, bonded item - Shadowstep (Movement speed +50%, Speed +2, however it reduces Strength by 2).