Fountain
Aidan Sitabo is standing next to the fountain. You can have a duel with him and permanently increase your Speed (up to 2 points!). The details are in the map description.
Examine the fountain and touch one of the triangles to earn 3 XP.
Loss-of-self - a woman you can talk to as a part of the "Beloved Slave" side quest. Use deception to receive Star's Kiss artifact from her.

Finzin
The location of Finzin. Speaking with the man allows you to begin the "Flawed Simulacrum" side quest.

Finzin's Levy
The location of the Tormented Levy, a character that you must speak with as part of the "Flawed Simulacrum" side quest.

Victim's house
The location of the victim's house, associated with "The Sorrow's Prey" side quest.
Pique is nearby and he's tied to the "Wayward Son/Daughter" side quest.

Chirurgical Parlor
Jernaugh is performing medical procedures thanks to which you can unlock new abilities. The list of procedures and their effects is in the map description.

Lord Vuntgen
The location where you can start the "Hidden Enemy" quest. Exhaust all dialogue options while talking to the Lord to gain XP.

Changing God Cultists
Cultists that you must speak with to push "The Sorrow's Prey" side quest further. They're Aitasii, Barant and Guromo.

Zebb, Avina and Nym
Children associated with "The Sorrow's Prey" side quest.
You can pay Avina for a song and receive a temporary boost to statistics.

Stichus
The location of a rogue Stichus, associated with the "Hidden Enemy" side quest. Exhaust all dialogue option to earn additional XP. You can also attack the stichus.

Ruined house
Rhin from the "Beloved Slave" side quest is hiding here. You can give her some shins, make her join the team or hand her over to the thugs who show up.

Crashed airship
Erritis is standing next to the wreck and he can join the team.
Mother Temaz is standing nearby - talk to her to begin the "Wayward Son/Daughter" side quest. Later in the game you can find Beads of Mother Temaz here (oddity).

The above map shows the Cliff's Edge district which is located in the eastern part of Sagus Cliffs. There is a myriad of things do to here: lots of side quests as well as unique additional activities described below. Moreover, you have to visit this place several times while performing main quests. From here, you can go to Caravanserai, Government Square, and Underbelly.

1. Aidan Sitabo. This character stands by the fountain. You can duel him and permanently increase your character's Speed (by as much as 2 points!). A successful tactic for the duel is described below.

Examine the fountain and touch one of the triangles to gain 3 XP. Talking to Loss-of-self is a part of the Beloved Slave side quest. You can also use Deception to take an artifact called Star's Kiss from her.

2. Finzin. This is where you find the person who initiates the Flawed Simulacrum quest.

3. Finzin's Levy. A robot connected to the Flawed Simulacrum quest to whom you are sent by Finzin.

6. Lord Vuntgen. This is where you can start the Hidden Enemy quest. Exhaust all dialogue options while talking to Lord to gain XP.

8. Zebb, Avina, and Nym. Children connected to two side quests: The Sorrow's Prey and Hidden Enemy. You can pay Avina for a song and receive a temporary boost to Stats.

9. Stichus. This is where the monster connected to the Hidden Enemy quest is located. Exhaust all dialogue options to gain additional XP. Stichus can also be attacked.

10. Ruined house. Rhin from the Beloved Slave side quest is hiding here. You can give her shins, recruit her into the party, or hand her over to the bandits when they show up.

11. Crashed airship. Erritis is standing by the wreckage. He can be recruited into the party. Mother Temaz is also around-talk to her to start the Wayward Son/Wayward Daughter (the title of the quest depends on the gender of the main hero). In the later stages of the game you can find the Beads of Mother Temaz oddity here.

12. Stand. Madelia Glittering has her stand here. She sells consumable items, cyphers, and Bonded items. Madelia can lose her stall in the later stages of the game (the stichus will be responsible), but she will still stay in this location and offer you goods. 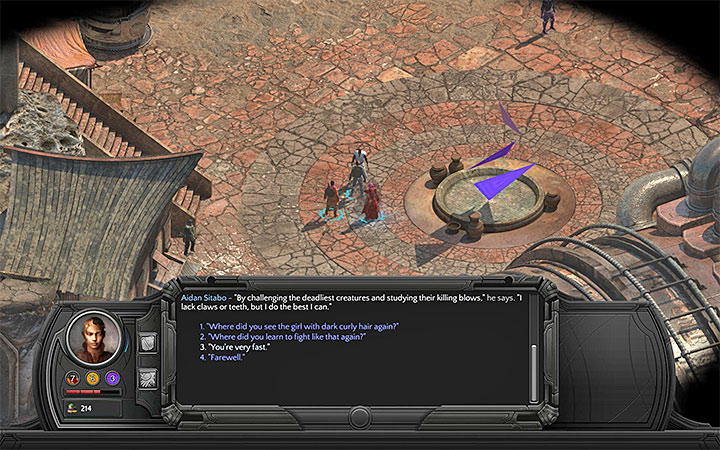 Aidan Sitabo is standing at the unusual-looking fountain.

You can fight a duel with Aidan Sitabo while in Cliff's Edge. This activity is not considered a separate quest and is not marked in the journal in any way. You won't unlock any additional mission this way, either. It is but an extra activity that you can do while exploring the city. It's worth it to fight the duel due to the possibility of permanently increasing one of the Stats. It's a good idea to rest in a tavern beforehand, though, since you will have to pass several quite difficult checks and therefore additional points will be very useful.

To start the duel, find the person standing by the fountain in the main square. The man is named Aidan Sitabo (M6.1). Interact with him and click through the conversation until you find the "I bet I'm faster than you" option. Now you have to pass several checks. The first one requires Speed and the Quick Fingers skill. If you fail it, you receive minor damage and you won't be able to repeat it.

After the first test, choose the "I'm ready for another part of your test". The second test also makes a Quick Fingers check. If you don't manage to pass, you receive damage to Might points pool but you can reattempt to pass the test. 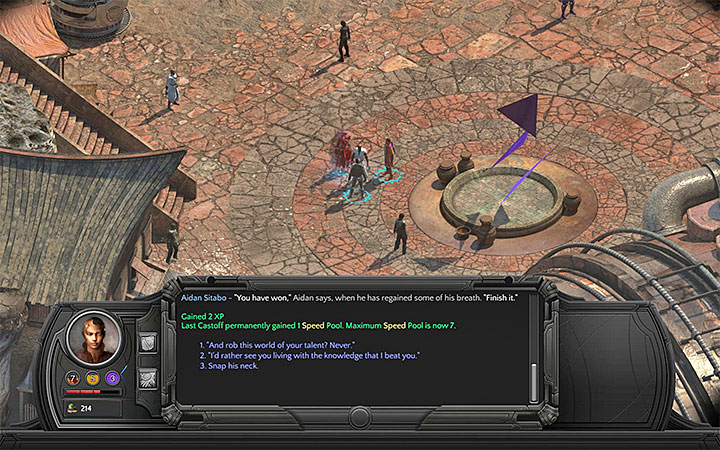 Once you've won the duel, you can kill Sitabo go gain another permanent bonus to Stats (the third dialogue option).

If you pass the second test, choose the "So? Did I pass all your tests?" option. Confirm your willingness to start the last test which is a fight to the death. In this case, you can use Speed and Quick Fingers or Might and Smashing. Completing the last test gives you 2 XP and 1 permanent bonus point to your character's Speed. This isn't everything, though, since you can decide Aidan's fate afterwards. If you choose to snap his neck, then your Speed is increased by 1 point again (which in total gives you 2 points!).

If you fail the last test, your character dies. However, don't worry since you'll respawn in the sanctuary from the prologue. Go through the portal and you will appear in Dendra O'Hur Chapel in Underbelly. Exit the building and visit Aidan Sitabo again. Interact with him and choose the first dialogue option to propose a rematch. The opponent will refuse but you will be given a reward: a cypher called Dynamic Hourglass.

Chirurgical Parlor - surgeries and their effects 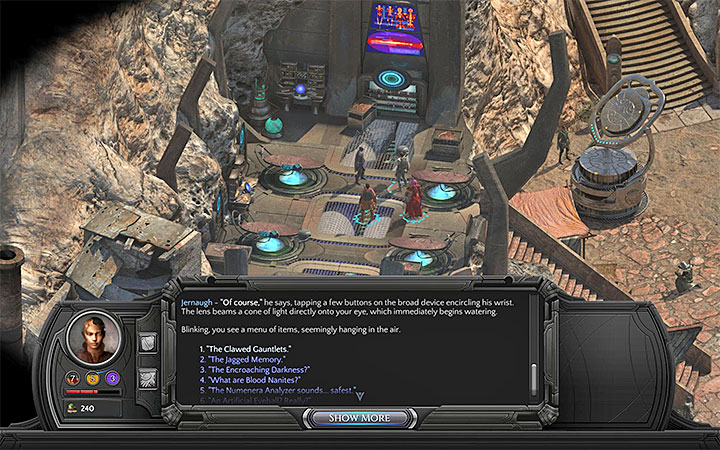 Select the surgeries that interest you from the list.

Jernaugh can be found in the chirurgical parlor in the northwestern part of the district (M6.5). He specializes in surgeries that involve implantation. Such operation can unlock a new skill. Below are several important things concerning this gameplay mechanic: