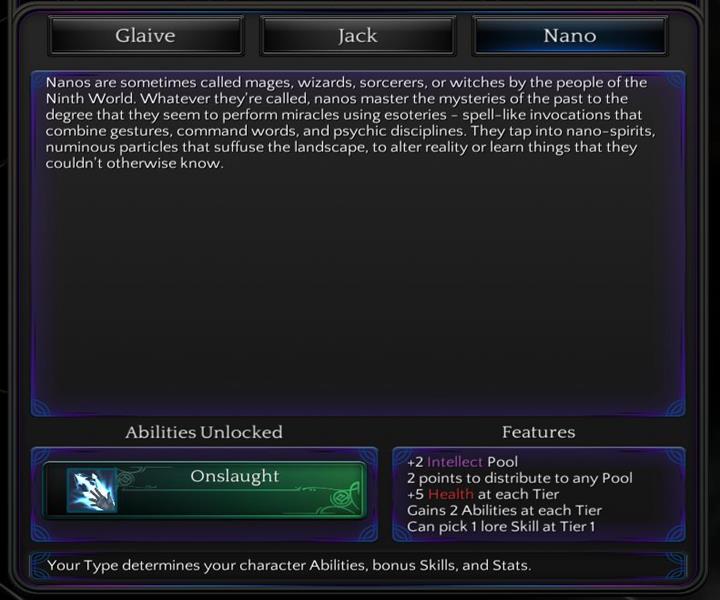 Nanos are the masters of arcane knowledge, capable of manipulating reality and other people's minds. It's a great choice for players who want to travel as a very intelligent hero, using spells to interact with others. You could simply call them mages.

Who is this class for?

Nano is the counterpart of a mage, or a sorcerer. They are the most enigmatic characters of this world; they can access spells, which tremendously diversifies the game. One of the first skills, Scan thoughts, is a great example showing just how complex this class is. It gives the player an insight into surface thoughts of most people and creatures, which is very immersive for those willing to play the part of a powerful mage. On top of that, nano is great with ciphers. They key to this class is intellect - you have to invest a lot into this parameter when playing nano. If you do, you will unlock numerous additional ways of interacting with the game world.

Perhaps most importantly, this class has access to powerful spells and abilities. Nanos are perfect additions to nay party and they have vast knowledge about the surrounding reality. If you want to play an intelligent and might mage; ferocious in combat and wise in conversation, chose nano.

Bottom line: a perfect class for those who want to play a mage class, scan thoughts and cast mighty spells.

How to develop a Nano?

As time passes, Nano are becoming powerful creatures and mandatory party members. Frequently they serve as mages, but they are versatile enough to stand even in the first line. Don't be afraid of risking and remember about a few skills that should become the base part of tactics of every nano.

Adaptation - tier 1 skill - a protection spell with area of effect which can make the party almost indestructible, especially early in the game. It provides Protected fettle (Armor +2) and Resistance +1 fettle. It also provides armor and resistance boost that depends on level. Even later in the game it is a good idea to cast Adaptation at the beginning of each crisis, when the party stands together and the melee fighters haven't moved forward yet.

Dimensional Superposition - tier 1 skill - a teleportation spell. Teleportation is very useful in Torment: Tides of Numenera. Not only can you escape the enemies or move into spell casting position, but after each use of teleportation Nano receives Phased fettle that increase the strength of offensive spells. Furthermore, the ability doesn't consume action, but movement points. It means that after using the teleportation you can still attack. You should always use teleportation before casting offensive spell, so that you strengthen your attack.

Flash - tier 2 skill - a spell that is especially useful early in the game since it deals relatively high damage and has an area of effect. A great advantage of Flash is that it harms only the enemies. It is useful when attacking groups of enemies with whom your melee fighters are fighting.

Animate Balefire - tier 4 skill - a very useful skill that is mandatory for every nano. It creates a fire construct which is fighting alongside you and focuses the enemy attacks on itself. The creature has high aggro (he is provoking the enemies to attack him instead of other party members) and he can provide you with a few turns for regrouping or planning a counterattack.

Maelstorm - tier 4 skill - the strongest magic attack. It deals 12 points of various types of damage on a very large area. Combined with effort and passive bonuses, this spell can greatly harm the enemies.

These skills will allow you to survive almost all crises. Simply start with casting Adaptation, then Animate Balefire, and finally Maelstorm or Flash prepared with a Dimensional Superposition. Remember, that you must use the Maelstorm wisely as it can also harm the party members. You should aim the spell so that it hurts only the enemies. You can use Animate Bonefire for that by focusing the enemies on a single character.