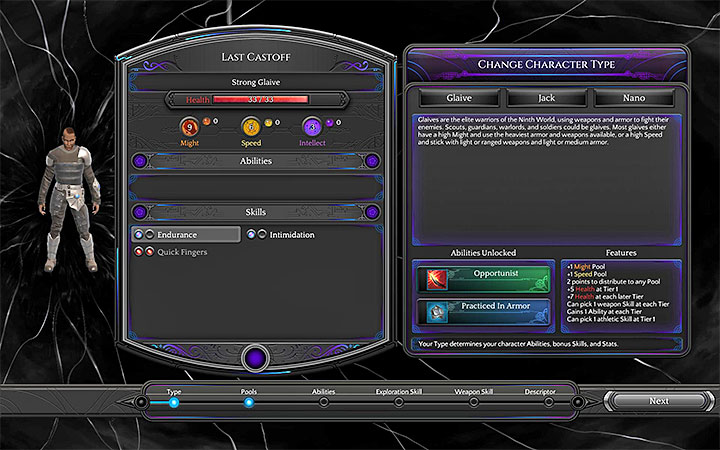 Glaive is a class of elite warriors of the Ninth World. During combat they use weapons and armor. It is an archetype of a warrior, a perfect choice for players who prefer to solve problems by force.

If you decide to make your main character a glaive, you will receive the following bonuses:

Who is this class best for?

Glaive is an equivalent of a warrior. By default he will solve problems with force - either by fighting or by intimidating others in conversations. What's important, you can select the type of weapon in which the glaive will specialize. You can choose from heavy, two-handed weapons or medium weapons combined with shield. You can choose whether to play a glaive with the highest defense skills or one that is more agile on the battlefield and uses speed to weaken the enemies. glaive is the only class that can select +15% bonus to damage level of selected weapons: heavy, tactical (medium), light, melee or ranged.

Glaive is not only a master on the battlefield. Additional athletic skills and high speed can impact optional dialogue options and make it easier to complete many challenges in the game. High strength and a reputation of a strong warrior will make it easier to impress other inhabitants of the world.

If you want to play a strong, resistant warrior and learn the secrets of the world by using brute force, then select this class. You won't discover all the secrets and hidden conversations (companions of other classes might help you with that), but you will defeat every opponent. Unlike the characters focused on diplomacy, glaive will manage perfectly during crises. If you plan to frequently participate in combat, you should have even two glaives in your party (the main protagonist and Erritis who is also a glaive).

All in all, the class is perfect for players who prefer a more direct approach to the game and don't intend to avoid combat. This class is much easier to develop than the two other ones as it doesn't have too many unusual skills. What's more, many useful skills are passive. Thanks to that you don't have to remember to always manually activate them when needed.

Which descriptor to choose?

At the beginning of the game you can select one descriptor. You should choose wisely as later you won't be able to change your mind. If you plan on playing as glaive, consider selecting one of the following descriptors:

Which exploration skills to choose?

Below there is a list of exploration skills you should spend at least one development point on (and it is best to reach mastery in them):

Which weapon skills to choose?

Weapon Skills are available only for glaives (Jacks and Nano cannot use them). You can choose from five skills. However, only two of them are really interesting:

General information about developing a glaive 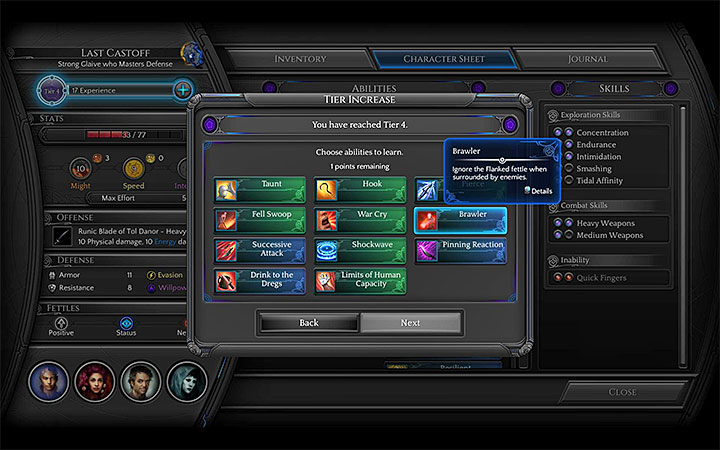 Glaive, similarly to other classes, can be developed in various ways. It should depend on how you plan to use this character and what is your preferred playing style. Below there are a few suggestions related to development paths that aren't too complicated and that enable the player to utilize the main advantages of glaive. You can use this advice both while developing the main protagonist who is a glaive and when improving Erritis who is the only available glaive companion.

The first development path is based on building a glaive with heavy armor and two-handed weapon focus. Such character can be a great tank that protects the other party members by focusing enemy attention on themselves. They can also deliver powerful melee attacks.

The second development path is building glaive as a dedicated warrior. Instead of being a typical tank, he can easily move around the battlefield and quickly attack selected targets. Such character should use one of the medium armors and be equipped with a weapon (medium or a very good light one) and a shield combo.