Obviously you will have to assault the room below you. Breach in and start off by finding a good cover for your colleagues (screen). There are a lot of hostiles inside this room, so you should consider using the grenades to get rid of them. You won't have to worry about running out of ammo or grenades, because you'll come across a new equipment crate very soon. 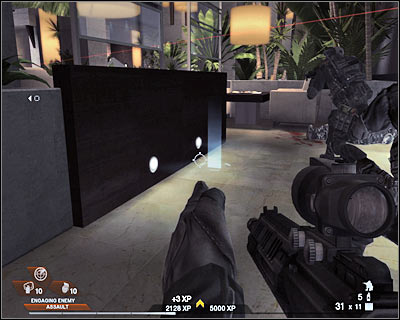 Make sure you've been able to secure this entire room, as well as a nearby corridor. You may start moving forward. Head on to the left room. It shouldn't be guarded by anyone, so you may enter it without any unwanted delays. Proceed to the next room (screen) and head over to the equipment crates. 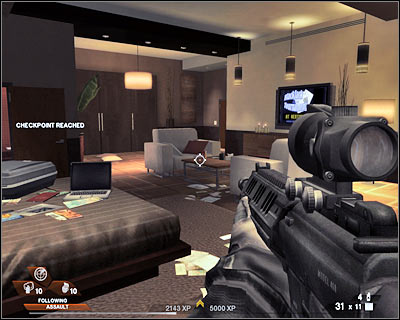 Don't worry if you can't see a new corridor on your tactical map. Order your men to go to the right door. If you use a camera, you'll notice an opponent with a shield (screen), so you'll have to use an explosive charge to get rid of him. 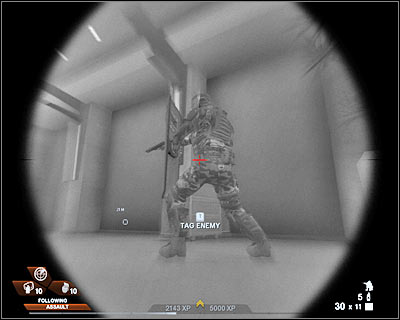 You should go alone to the left door. Give the order to proceed with the assault. Open your door at the same time and assassinate two terrorists (screen). They won't suspect your attack, so it's going to be extremely easy to get rid of them. You might want to consider going back to the equipment crate, however you've probably used only a single rifle clip here. 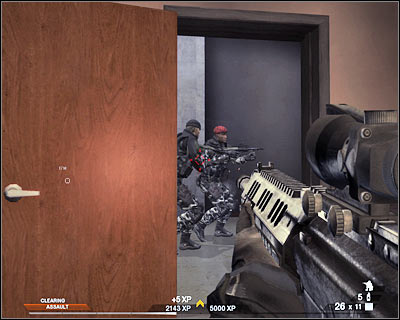 Watch out for the third opponent. He may appear to your left, however in my case he was shot and killed by the members of my squad. Start moving towards a small apartment. You will have to be careful here, because one of the terrorists may be taking cover behind a pillar (screen). Use the grenades to get rid of him, however you can also send your men to that apartment. Proceed towards three grappel points and use the ropes. 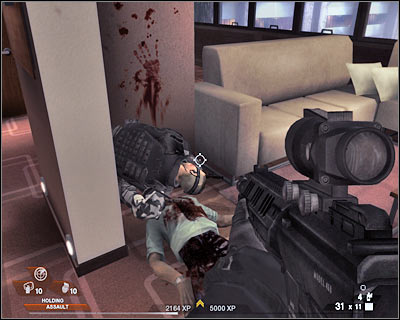 Obviously you will have to get to a new room which is located below you. This area shouldn't be guarded by anyone, so you won't have to make any preparations. Move forward and look at your map. Order your colleagues to stack up next to the first door (screen). You should consider going to the second door. Order your men to use an explosive charge during the assault. Open your door at the same time and surprise one of the terrorists. 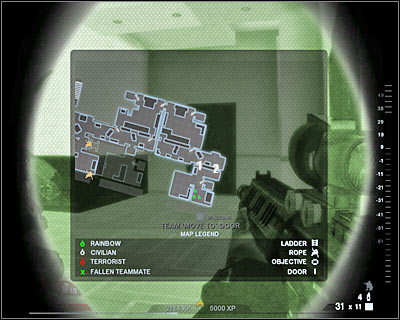 Head on to a new door which can be found to your right. There's only one terrorist inside (screen), so you won't have to prepare for anything. Open the door and kill him before he turns around. Once this is done, head on to the equipment crates. I would recommend that you activate your thermal goggles before you decide to enter a new room. 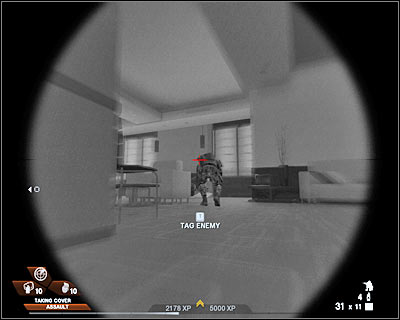