You may finally begin moving towards the main entrance which can be found to your right. Ignore the hint about the possibility of using the side windows. Activate the snake camera and tag two closest opponents. One of them will be standing to the right (screen). Make sure he's tagged. Otherwise he could attack your colleagues easily. 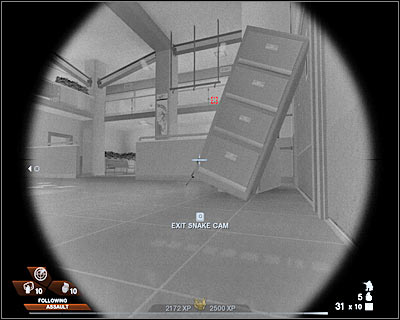 Once you're ready, order your squad members to proceed with the assault. I'd strongly recommend allowing them to use an explosive charge or to throw a grenade inside, mostly because there aren't any civilians in the area. Either way, you shouldn't have any major problems securing this first large room (screen). Watch out only for the guy who's occupying one of the upper balconies. 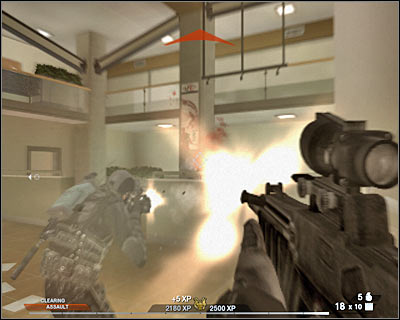 As you've probably noticed by now, you will be able to move more freely while exploring the surrounding rooms. I would recommend heading towards the stairs (screen), so you'll have a much better view at the surrounding area. Start moving forward. The rest of the squad should follow you. 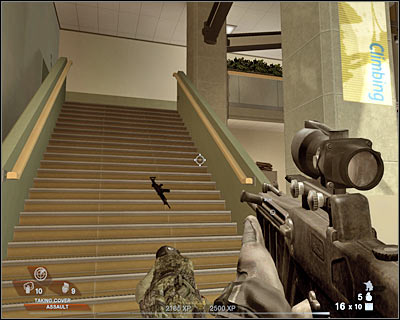 You will be able to reach a new door in just a few seconds. Don't open it, because there are some new terrorists standing on the other side. Issue an order to get ready for an assault. After that, attack enemy positions. The first terrorist should be standing in front of you. Once he's gone, order your men to take cover somewhere nearby. 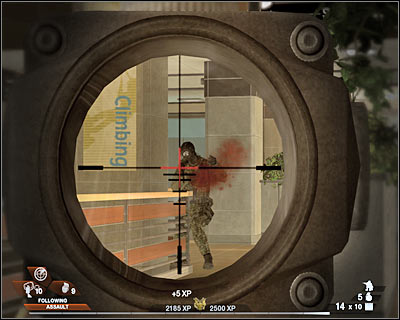 Now you will have to start shooting at the remaining enemy soldiers. At least of them are currently on this floor. The rest is patrolling the lower level. Thankfully, you should be able to find a good cover (screen) and you can also count on the support from the rest of the team. Once you've secured this floor, get closer to the stairs and check the lower level from here. Kill a few additional thugs. 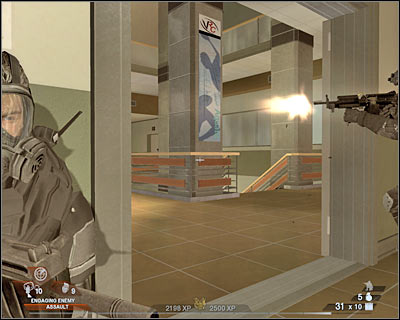 I would recommend staying on the first floor, because that'll make your life a lot easier. Start moving forward and eventually you will come across a new large corridor. One of the enemy snipers is standing on the roof of the building. Take him out from here (screen), before he does any real damage. 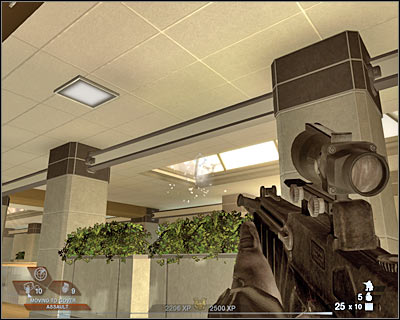 Now you should consider choosing some of the nearby pillars to be your cover points. You should be standing close to the stairs (screen). The tactics here are quite simple - keep firing at some of the visible enemy soldiers and prevent them from getting too close to the stairs. I wouldn't recommend throwing any grenades, because you would have to be very precise in where these objects should land. 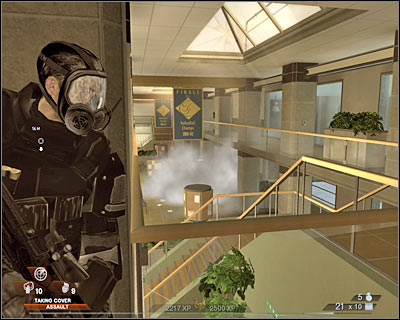