Once you've neutralized the heavy machine gun post, order your team members to assault the left section of the map through the door. You won't gain much by doing that, however you'll be certain that you've left no one behind. Start moving forward. It would be a good idea to order your men to take cover behind the middle van (screen). 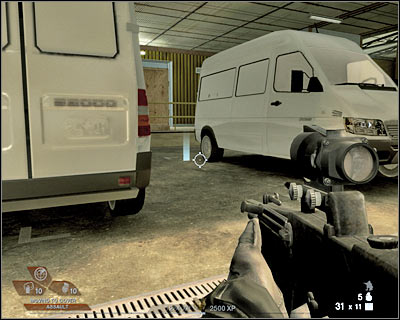 Try making a few steps forward and you should see that a large number of enemy troops is heading your way. Move back quickly and rejoin with the rest of the squad, however you should be guarding the right side of the vehicle (screen). Kill anyone who decides to assault your position. Make sure that you're using your tactical map, so you'll know where to expect the attacks to take place. 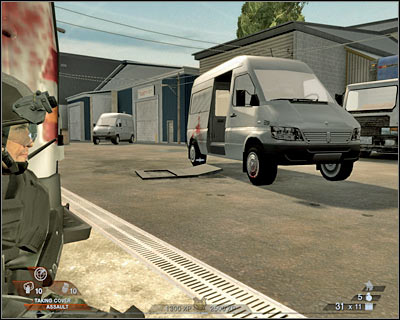 You can also try making a few steps forward, however you must be extremely careful, so you won't get surprised by anyone. The heavy machine gun post is probably being occupied by the second gunner (screen), so you must take him out as well. Once he's gone, order your squad members to follow you. Keep going straight. You shouldn't be in a lot of hurry. 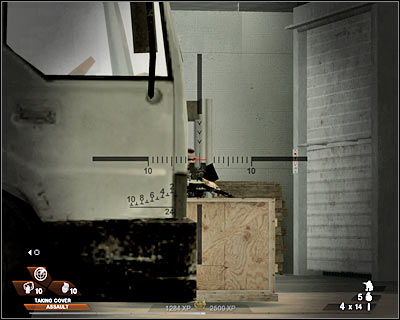 You probably won't encounter any additional terrorists along the way. Eventually you'll come across a closed gate. Wait for the rescued woman to show up here. Target the gate and ask her to open it for you (Open the Gate; screen). Wait for the civilian to perform this action and listen to a short conversation. Make sure that the rest of the team is here with you. 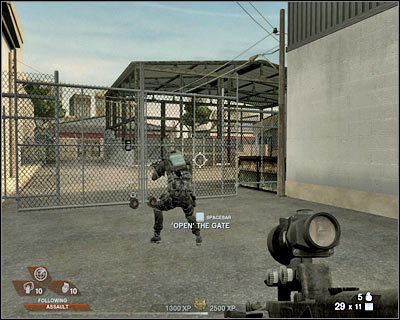 Make sure that you've understood the plan. Order your team to hide behind the dumpster which can be found to the right (screen). You can't stay in the open, because you would have risked the life of an innocent civilian. Wait for the woman to lure out one of the terrorists into the open. 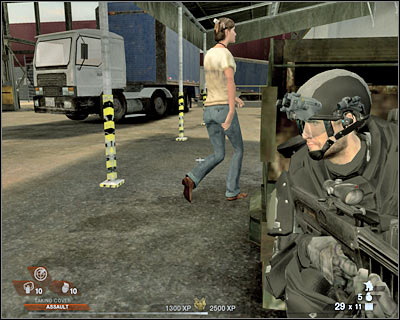 You will have to be very aggressive here. Leave the cover and eliminate the first terrorist. After that, start shooting at his colleagues. They'll be leaving this building very shortly (screen). You can also consider throwing a couple of grenades inside. You will have to take out at least 5-6 terrorists. Also, prevent them from harming the civilian. 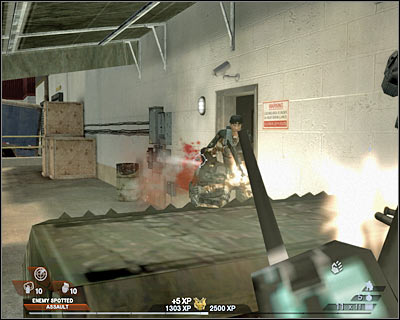