You should receive new instructions on how to proceed with the current situation in just a few seconds. Your new objective will be to take out two enemy snipers. Approach a large door. I'd strongly recommend that you use one of the gadgets from the first game - a snake camera. Lower your view and you should be given a chance to use this camera. Press the SPACE key and wait for the game to switch views. You can tag both snipers by aiming at them and pressing the T key (screen). 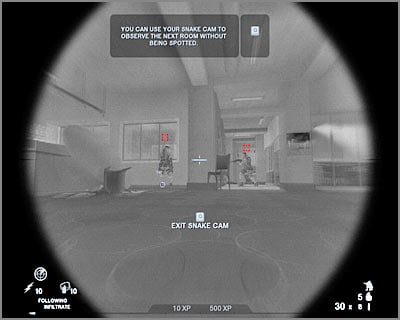 Close this view, because it's sole purpose was to locate enemy soldiers, not attack them. Move back a little and press the SPACE key while aiming at the door. Your team leader will automatically order his men to prepare for an assault (screen). As you've probably noticed, you will be given three choices here (icons in the lower left corner). If you want to follow the instructions of this tutorial, press the B key for Open & Clear (a standard assault, without using any grenades). Your men will enter this new room and attack the terrorists. You probably won't have to help them in getting rid of the snipers, especially since you've tagged them. 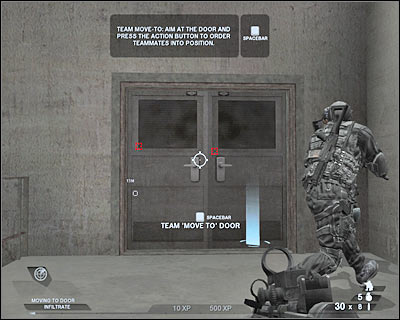 Ignore allied units which will appear in front of you. Order your colleagues to follow you and start moving forward. Once you've reached the stairs, proceed to the lower level. You won't have to prepare for any new assaults. Open the door and head on to your left (screen). I would recommend that you order your men to stay here for a while, because it'll be better to act alone. 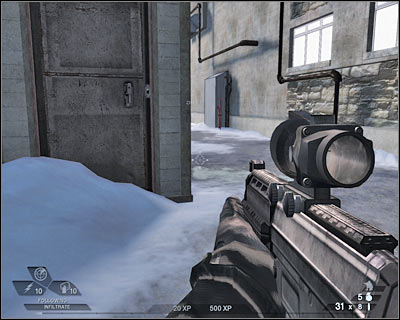 Make a few steps forward and take cover behind the right wall. Approach the corner and lean out carefully. You'll notice two terrorists standing here. Wait for the game to display a new hint. Your bullets will be able to penetrate some of the surfaces, including this wooden barrier. I would recommending using a second gun, because there's a better scope attached to it. You may consider practicing how to shoot through the barrier, however if you don't want to risk anything, aim for their heads. Also, make sure that the terrorists don't escape, because they would have alarmed their colleagues and you'd have to deal with more bad guys. 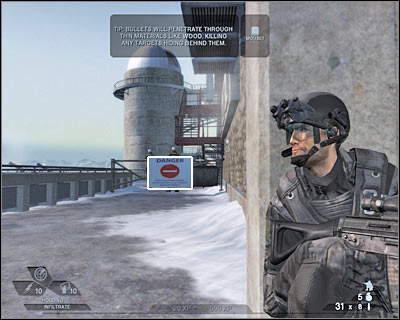 Allow your team members to join you and start moving forward. You will have to approach the barrier. Just as you're instructed, press the SPACE key to climb over the barrier. Proceed forward. Press the SHIFT key for sprint if you want to. Your objective here will be to approach a new door (screen). 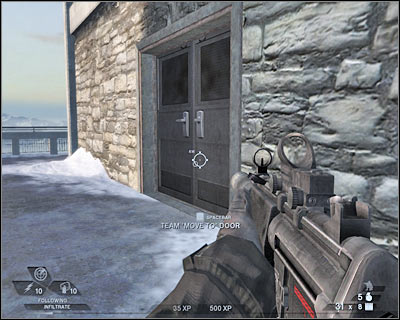 For the first time during the course of this game you will be allowed to practice something called 'duel entry'. This feature will allow you to surprise enemy units by attacking them simultaneously from two different sides. Use the camera and move it to the left. Target the left door (screen) and press the SPACE key to order your men to get there. Tag both terrorists and proceed with the assault. Open your door at the same time and help your colleagues. Once again, you don't have to use any grenades. Just make sure that you've secured this room. 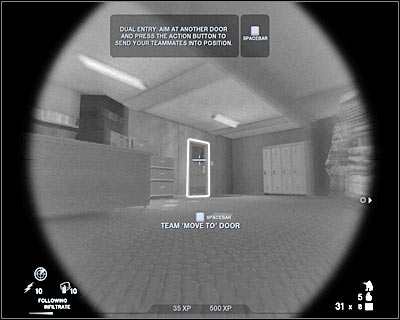 You may proceed towards a new door. Thankfully, there aren't any terrorists standing on the other side, so proceed to the next area. Make sure that the rest of the team is following your lead. You should be able to reach a new area very soon. Order your men to stack up near the right door (screen), because you'll going to take part in a new assault in just a few seconds. 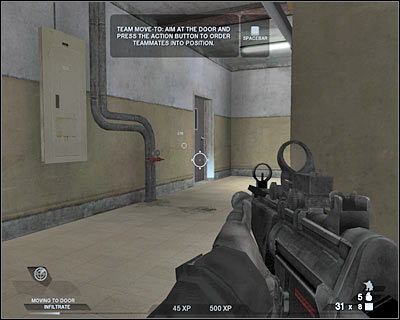