You won't have to inspect the left room, because you wouldn't find anything of interest there. Instead, start moving towards the vehicles. I would recommend that you turn right, because at least one enemy soldier is hiding near the cistern truck (screen). Kill him right now, so he won't be able to surprise you in the future. 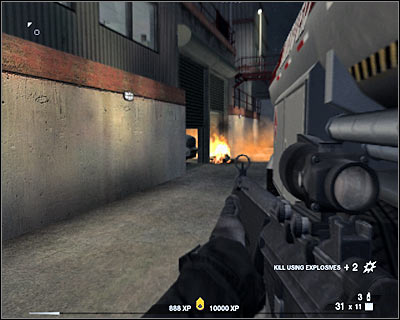 Go back to the vehicles and proceed to your left. Be careful, though. This area is being guarded by at least one terrorist (screen). Deal with him quickly and make sure no one else is heading your way. Use the stairs to get to the upper level. 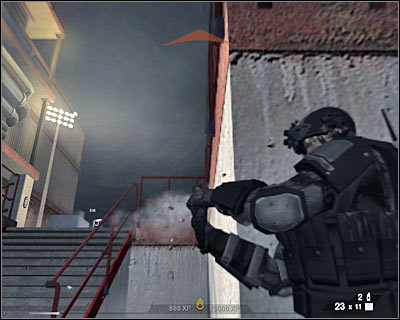 I would recommend that you attach a silencer to your main rifle, because it'll be a good idea to act stealthy here. Take cover behind some of the nearby barrels and wait for two enemy soldiers to show up. Start off by eliminating the terrorist who is standing near the ladder (screen). Once he's gone, kill his colleague. He should appear to your right. 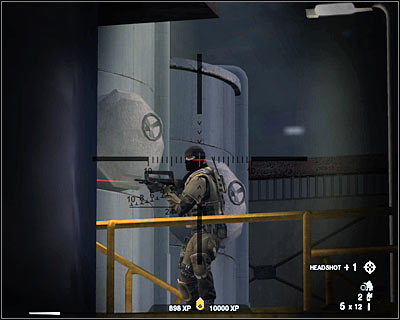 You may proceed towards the ladder. Obviously you must use this object to reach an upper platform. Start heading towards your current destination. Eventually you'll come across a door. Open it and proceed to your right. Keep heading forward until you've reached a new door (screen). Approach it carefully. Take cover behind the wall and try opening the door. 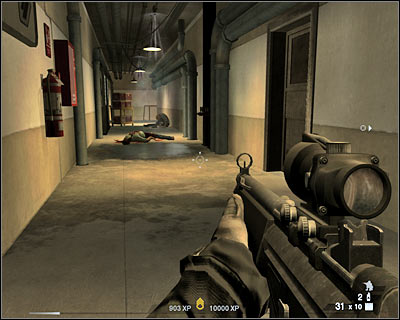 You should notice that one of the guards is patrolling a nearby balcony (screen). Try killing him from here. Once this is done, move back, so you won't be seen by anyone else. Raising an alarm wouldn't be equal to a mission failure, however it'll be easier if you surprise other terrorists. Proceed to the end of this corridor and head on to a lower level. 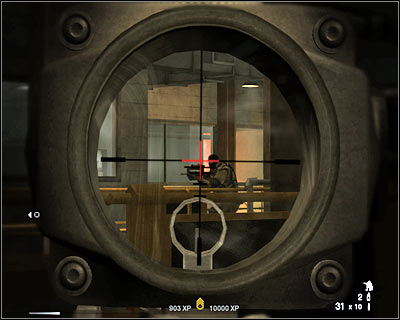 Proceed to your left and keep moving forward until you've reached a new door. Open it and kill a terrorist. He should be standing in front of you. Make a few steps forward and turn right. A second terrorist can be found somewhere around here (screen). Hunt him down and kill him. You may finally proceed to your left. If you're lucky, you won't encounter any other terrorists. 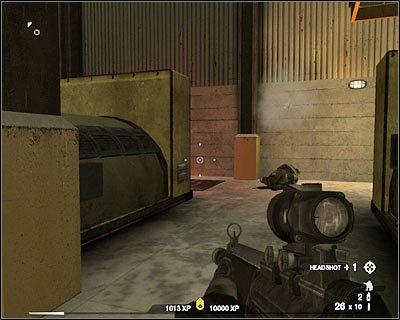