I have to warn you. This is going to be a very chaotic mission. For the most of the time you'll have to be careful and ready for anything. You'll start the game inside the library. You won't have to secure the first room, because it's not being guarded by anyone. Instead, head on towards equipment crates (screen). I would recommend taking two assault rifles (or an assault rifle and a submachine gun), because you won't need a sniper rifle during the upcoming fights. 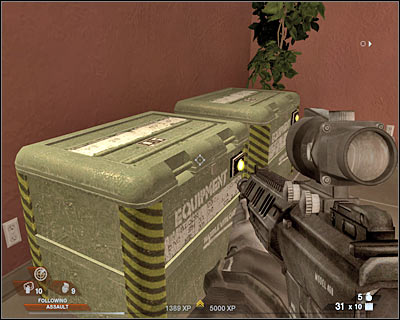 You may proceed towards the exit. Don't use the camera, because allied units are standing outside. Approach them (screen) and listen to a short conversation. You should notice that Miguel is escaping. You won't be able to kill him right now. Instead, you'll have to pursue him. I guess I should tell you that you won't be punished for moving slowly, because he won't escape you. Focus mostly on surviving and that goes for the entire team, not only your main character. 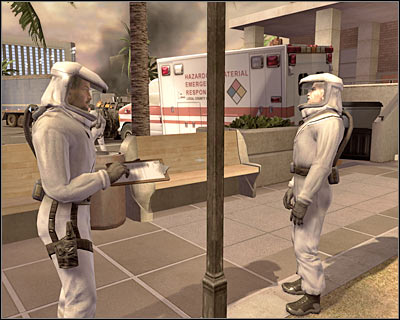 You should be able to regain full control over your team once the conversation has ended. Move to your right quickly and order your colleagues to take cover behind a small concrete wall (screen). You may join them or you can hide somewhere to the right. Try killing at least 4-5 terrorists from here. Some of them will be hiding inside a small booth and they're your priority. 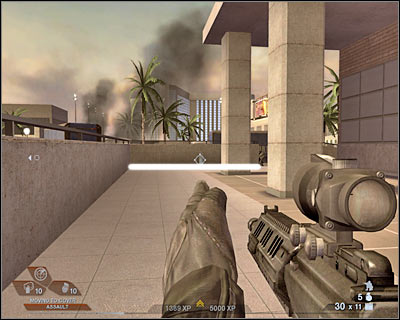 Once you've secured the nearby area, allow your team members to proceed forward. Be careful, though. An enemy sniper is stationed in front of you (screen) and it'll be up to you to get rid of him. Once he's gone, send your men towards the booth. Keep heading forward and use some of the nearby vehicles for much needed cover. 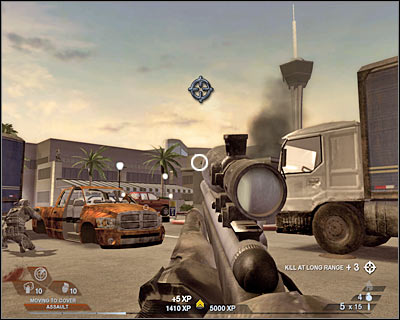 Your objective here will be to get to a small passageway (screen) which leads to a residential area. You shouldn't encounter any additional enemy troops here, so head forward along with the rest of the team. You'll notice a glimpse of your target around the corner. Don't worry, because this is all staged and eventually you'll catch up to your target. 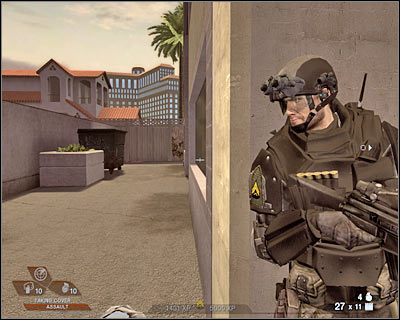 You may as well ignore the warning about the civilians, because you'll only encounter a few of them. The first group of enemy soldiers can be found just around the corner (screen). Watch out for the guy with a shield. He will appear to your right and you must kill him as soon as possible, before he gets too close. Allow your men to scout the area ahead, however make sure they found a good cover, so they won't stay in the open. 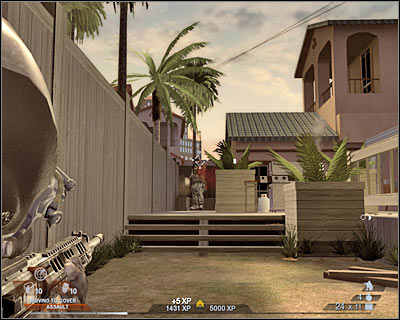 I would recommend using grenades to eliminate more distant targets, however avoid throwing these objects if you see any civilians in the area. You will have to get closer to a small passageway (screen) which leads to a second estate. Obviously this area is going to be well guarded, however you can try eliminating the terrorists from a larger distance. 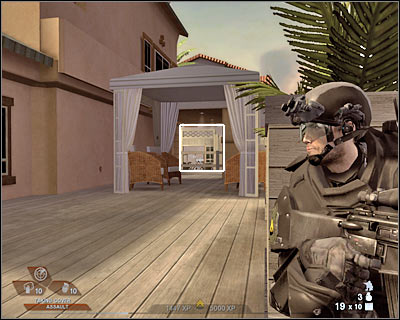