This whole act should be considered as a tutorial section of the game. Don't be fooled, though. You won't receive any special treatment. If you're not careful enough, you'll die quickly and you won't be given any chances to fight back. Thankfully, you'll be presented with a lot of hint windows along the way. Make sure that you've read them all, because they contain important data. You should also know that for the most of the time there's only going to be one route leading to your current destination. You'll familiarize yourself with the controls and you'll also be presented with help on how to issue commands to your squad members. Finally, you'll be given a chance to participate in a few assaults.

You'll start the game in a very scenic location. Enjoy your surroundings as long as you want to. Ignore the fact that you can't use your weapon here. This is the first interactive cut-scene, so you'll only be allowed to move around and listen to what other people have to say. Start off by moving towards the stairs (screen). 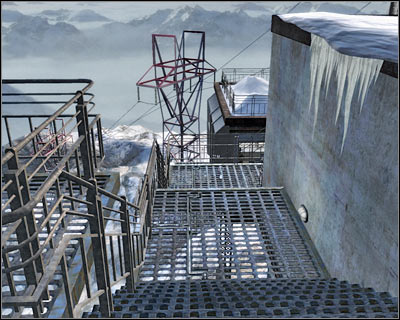 Like I've already said, there's only going to be one route leading to your current destination, so you really can't get lost. Look at the screen - that's where you'll have to end up. Once you're inside, listen to the assault plan. 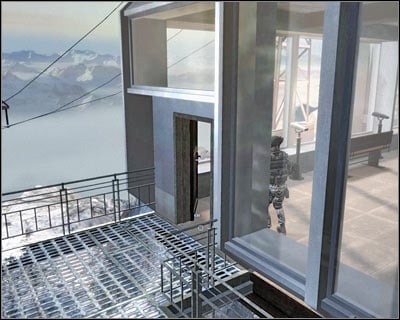 As you've probably suspected, you will have to choose the left passageway. Your teammates are already standing there, so you'll know where to go. You can't command your team just yet, but it's going to change very soon. Proceed towards a new platform (screen). Get ready, because you will have to kill one of the terrorists in just a few seconds. You can also stop for a while, because a video feed is going to be displayed on your screen (top right corner). 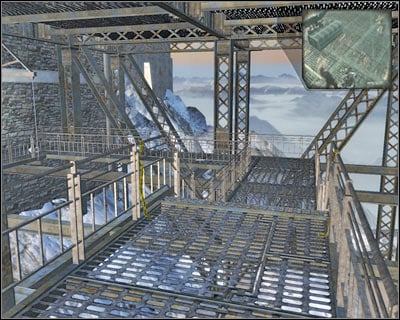 You should be given your first hint here (screen), so make sure you've familiarized it with its content. You will be given an opportunity to take cover behind many different objects. This will increase your chances to survive and you're still be allowed to attack enemy units. You can take cover by approaching your target and holding the right mouse button (by default). Make sure that you've chosen a weapon with a silencer attached to it. You can also change the rate of fire by pressing the X key. Single shots will be more useful here. 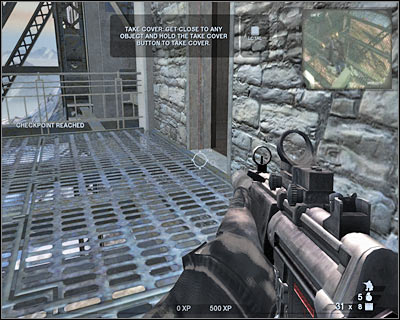 You don't have to take cover behind the wall, but it won't do you any harm, so follow the instructions and press the right mouse button. Once this is done, press and hold the left movement key, so you'll end up standing near the doorway (screen). Wait for the terrorist to stop near the windows. Lean out and take him out by aiming at his head. I would also recommend that you go for headshots later on during the game, because you'll be rewarded for these types of actions. It's also a good idea to surprise enemy soldiers by shooting them in the back. 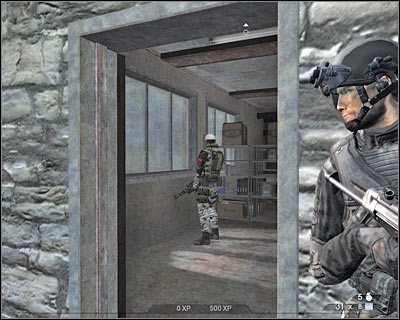 Enter this new building. Remember that you display a tactical map on your screen by pressing and holding the TAB key. Now you must press the ALT key, so you'll order your men to join you. If you press the ALT key again, you can order them to hold their positions. For now, let them follow your lead. Proceed to your right and use the stairs to get to the top level. 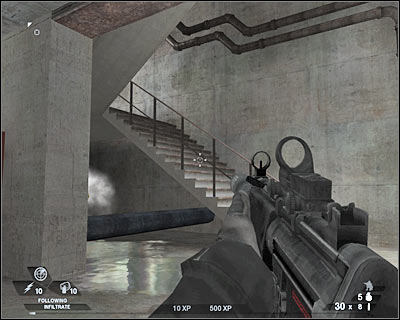