We'll start off inside a small room (#1). You could wait for some new orders to appear on your screen, however this won't be necessary. Start moving forward. You won't encounter any units in the nearby rooms, so you won't have to use any larger objects for cover. Head on to a nearby door (#2). Use the Snake Cam and tag two terrorists. They will be standing on your left.

Order your men to prepare for an assault. Head on to the left door. Proceed with the assault, HOWEVER make sure that your team uses explosive charges to breach the room. Thanks to that, you won't have to worry about the terrorists, because they will be killed in an explosion. Concentrate your fire on the third enemy soldier. He will be standing on your left (#1). That's where you'll need to go (#2). There's only one path here, so you can't get lost.

Hide behind the left wall and open the door carefully (#1). Start shooting at the visible enemy soldiers. One of the terrorists may decide to leave that room, but your team will take care of that problem. Order your men to proceed with the assault. It would be wise to help them during these fights. The remaining terrorists will be hiding on your left (#2). Kill them and secure this room. After that, rejoin with the rest of your squad.

Open the door. Order your teammates to move on to the right door (#1) and prepare for an assault. Use the Snake Cam and tag two of the nearby terrorists. Head on to the left side of the screen. You will have to hide near the windows. Proceed with the assault. Stand up at the same time in order to help your colleagues to secure this room (#2). Additionally, you will have to take out one of the snipers. He will be hiding near the stairs.

Gather the rest of the team around your position and head on to the next room. You are getting closer to a much larger area. I would recommend sending the whole team to your right (#1). Your colleagues should be standing near a small entrance. They will start shooting at the terrorists. Head on to the left corridor. You will come across an equipment crate here, however I wouldn't recommend opening it right away. Open the door and hide behind the left wall. You should be able to surprise some of the terrorists from here (#2).

Order your men to move forward (#1). I would recommend staying close to the left side of the room. There are a few terrorists left, however you should be able to surprise most of them (#2). Don't forget about the possibility of using a scope. Don't waste any of your grenades, because you're going to need these objects in the future.

Be careful. Some of the terrorists may decide to destroy a part of the roof. After that, they're going to slide down (#1). Thankfully, you won't have any problems locating them, so you should be able to kill them quickly. You will have to secure this entire area. Start moving towards a designated checkpoint. The game will create an autosave here. Get ready for some very challenging fights!

You will come across a new junction. I would recommend starting off by moving towards a left door (#1), however you will go back here in a few minutes. Open the door and enter a new room. Turn right and kill two enemy soldiers (#2). You shouldn't have any problems finding them. Furthermore, you'll be able to surprise them. Order your teammates to hide near the windows.

Your squad members will start shooting at the visible enemy soldiers. Try going a little bit further. You should be able to reach a double door (#1). Open the door and kill some of the nearby soldiers (#2). There's not going to be many of them, so you shouldn't have any problems with this task. DON'T leave this room just yet. Otherwise you would have to deal with a lot of other units and it would just be too much.

Try sending your teammates a little bit forward, however you will have to make sure that your colleagues will hide behind one of the nearby slot machines (#1). Go back to the junction and choose a corridor that should be located on your right (#2). Head on to the upper floor. You won't have any problems finding the stairs.

One of the snipers is hiding in a nearby room. Kill him and try to take his place. As you've probably noticed, this is a great spot (#1). You will have an opportunity to hide behind a good cover. Try and take out all of the remaining terrorists (#2). Most of them will be hiding on the upper platform that should be located on your right. There's also a second sniper there. Take him out. After that, order your teammates to move closer to the stairs.

You will have to make sure that the area has been secured. Turn right and use the stairs in order to rejoin with the rest of your squad. A small group of enemy soldiers will be hiding near your destination (#1). Try and take them out from a larger distance. Be careful, though. Some of the enemy soldiers may decide to use grenades. Additionally, you will have to use your tactical map (#2) to locate these thugs.

Head on to the next corridor. You will find a door here. Use the Snake Cam. I would recommend tagging two targets for your teams (#1). Once this is done, order your squad members to proceed with the assault. I would recommend helping them during these fights (#2). There aren't many terrorists here, however more of them will arrive very soon. As a result, you won't be allowed to stay in the open for too long.

Start moving towards the LEFT staircase (#1). You will have to be quick about it. I would recommend sending your teammates towards the right edge of the screen (#2). They will be quite safe there and they'll be able to kill at least 2-3 terrorists. You, on the other hand, should remain close to the stairs. Start leaning out carefully. Additionally, make sure that none of the terrorists surprises you from the left flank.

Once you've secured this area, gather the rest of the squad around your current position. You should be able to find an equipment crate here (#1). Rearm yourself, especially since you'll be taking part in many difficult fights. Proceed to the next section. You will come across a much larger corridor. Notice that there are a lot of boxes here. You will have to take out at least one opponent (#2). Thankfully, it won't be too hard. Just make sure that you're using one of these objects for cover.

Start moving towards your destination. It's going to be a much larger casino room (#1). You won't have to use any cameras or breaching charges here, mostly because there aren't any bandits inside. Open the door and proceed to your target. As you've probably noticed, one of your colleagues from the first chapter of the campaign was being held here (#2). It turns out that this is a trap, however you will have to listen to what he has to say. Get ready. You will have to defend this position against an enemy assault.

This isn't going to be an extremely difficult fight, however you will have to remember about a few important things. First of all, you won't be allowed to stay in the open. If you plan on shooting someone, lean out carefully and only for a short period of time. Don't let any of the terrorists to get closer to the stairs (#1). Focus most of your attention on killing these guys. Additionally, some of the terrorists may appear on the right balcony (#2). You will have to take care of them as well, however the rest of your team should be able to handle these kinds of problems.

As you've probably suspected, eliminating only one group of enemy soldiers won't be enough. More enemy soldiers will arrive here shortly. Don't change anything. Just as before, keep guarding the stairs. Once you've taken out most of the terrorists, start using your scope (#1). Make sure that you've secured this entire area before you decide to move on. Use the stairs and turn right. Head on to a small staircase (#2). The objective will be to get down to the lower level. Make sure that your team is following you. Don't worry about the rescued soldier.

Head on to a new corridor. Be careful, though. One of the bandits will decide to open a door (#1). Kill him quickly. You could wait for his colleagues to show up or try to take them out on your own. If you decide to do this, you will have to enter a new room. Send your team towards a nearest cover (#2). This is very important, because otherwise they wouldn't be safe. Additionally, you will have to secure some of the upper balconies.

Try getting closer to a small corridor. That's where all of the remaining terrorists are currently hiding (#1). Additionally, they have stationery machine gun posts there. I would recommend starting off by throwing a couple of grenades. After that, start leaning out. You should be able to kill most of the terrorists from here (#2). Don't let anyone get closer to you or your team!

Once you've taken out all visible enemy units, you'll probably have to deal with one additional soldier (#1). DON'T send your team to that location unless you're absolutely sure that this guy is dead (#2). Thankfully, you won't have to worry about reinforcements.

Now you will have to head on to a nearby corridor (#1). You shouldn't have any problems finding it. There aren't any enemy soldiers here. Doing this will allow you to proceed with the next mission of this chapter. 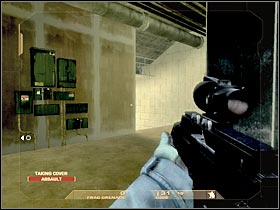