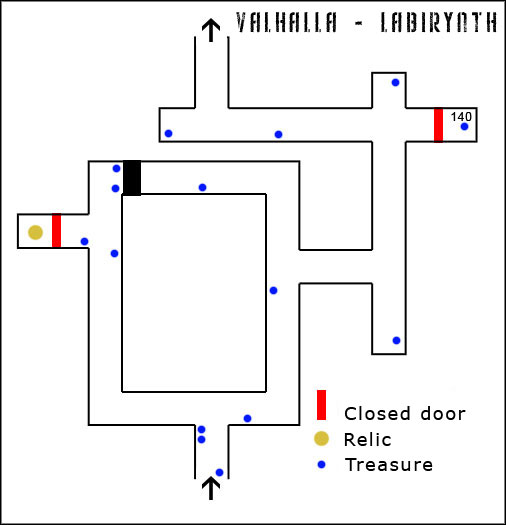 [140] When you reach the exit of the tunnel, you will find the bar which is mounted to the wall. Near you will find stone block which must be moved in appropriate place, under the wall. Climb this block and jump on the bar. This will open the door at the end of the corridor. You have to jump from the bar quickly, sit on the bike and drive to your destination before the bars will fall again. If you fail for the first time, you have to try again. This time abort the animation. This will give you more time.

[Relic] Next to the bar leading to the treasure [140], on the opposite side of the corridor you will find another one. Move the stone under the hole in wall which is located nearby. Take the bar and mount it to the top. After that pull up and wait till it moves down. Then jump down in the direction of the bike. After that move to the place with relic which is marked on the map, before the gate will be closed.

[141] On the left side, just after entering the room with hammers.

[142] Go in the vicinity of the room with weights, but don't go inside. Instead, keep going straightforward. Run over the stone bridge, because it will begin to collapse. Kill the spider and go to the corridor leading to the flooded room. Kill the Thrall and take the treasure.

[144] In the room with non-active weights where the gears were blocked by the fragment of the rock. On the top, near the chain on the right.

[145] In the same room as [144]. Draw off the rock blocking the gears and move it to the debris from behind which the spiders went out. Move under the debris and take the treasure from the end of the corridor.

[146] In the flooded room where you went down to the bottom. Jump on the ledges on the opposite side of the room and take the treasure from there.

[147] Enter the flooded room where the metal roundel is located. Catch it with a hook, pull on and jump on the ledge on the left. Enter the tunnel leading to another room and take the treasure from there.