One week earlier, nothing heralded the disaster to come. Lara is on the warm waters of the Mediterranean Sea. She observes the smoke from the distant ship. After conversation with your friends, jump to water and dive (Ctrl).

Keep diving to the big dome. In this mission Lara (beside of the standard armament) will be equipped in harpoon. You can use this weapon to kill the sharks. Choose the harpoon (R), get close to the big fish on the distance to shoot and kill it. In most cases you will need one or two shots to kill the fish.

Around of the biggest dome you will find the ruins of four smaller domes. You can swim inside each of them. The most important dome is located near the other side of the entry to the biggest dome. Swim among the ruins and take (E) the big key, which you can find on the table.

Then swim outside and go to the biggest dome. Swim inside. The path will by blocked by large puzzle. Choose the key and approach to center of the circle on the right. When you get there, insert the key into the hole (E). Then take another key from the table and also insert it into the hole, but this time in the circle on the left side.

Now each of the three circles has its own key, which can be activated by pressing button (E). Turn the middle key once, and also once left key. Then, swim up to the right circle and turn right key twice. When you do this, the path should be opened.

You will reach the flooded corridor. Swim to its end and you will find yourself in the partly flooded room. Swim to nearly visible stone and jump on it. Then, jump to the room, on the other side. 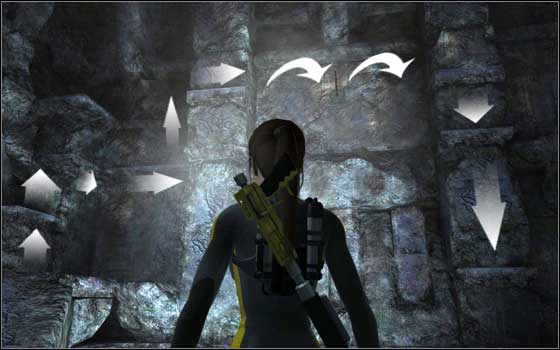 Run to the left corner on the leant column, which now is partly flooded and jump on the rocky block.

Then jump to the higher level and begin moving on the right side. Then clutch the ledge, which is located above you, and keep moving to the right. When you reach the end of the ledge, you will reach the place where there will be a pole protruding from the wall behind Lara. Grab the pole and make a cross-jump in the direction of the ledge on the other side. Now move right and slip down.

You will find yourself near the closed gate, which leads to the complex. Find two rocky blocks, which lie on the ground and move them to the trapdoor, which is located on the left side of the room.

Now move to the right side and look above you. Target the metal roundel, shoot the hook with the line and pull. The piece of the sculpture will fall on ground. Go to the podium in center of the room and move the lever.

The gate will be open. You will be able to continue your journey.