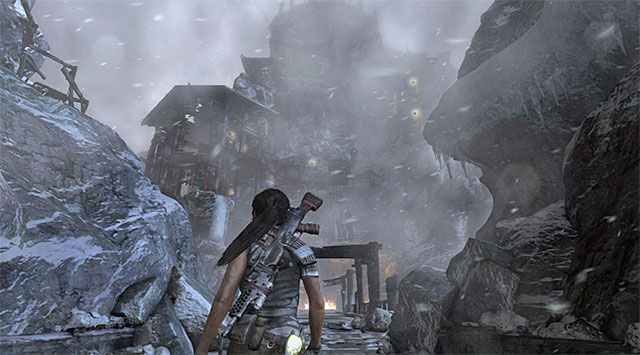 Head to the south-east door and open it using the axe. You'll enter the last game location - Chasm Ziggurat. Move towards the bridge visible in a distance and after watching the new cut-scene turn east, heading to the nearby buildings. 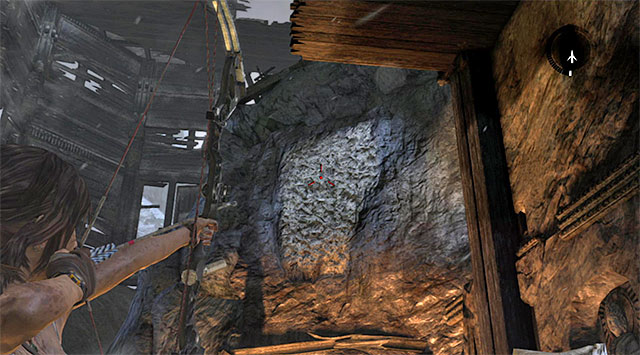 Position yourself at the edge and aim at the interactive wall located bit higher, thus creating the rope bridge. Use it to get to the wall and stick to it. Now start moving to the right, performing a jump towards the second part of the wall (you have to press interaction key/button again) and then towards the stable wooden platform. 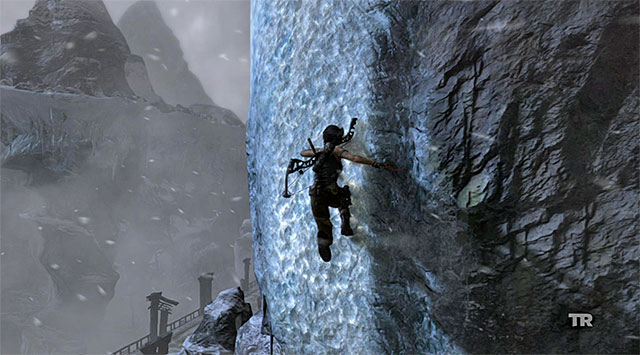 Move ahead preparing for a new jump after a moment. Approach the edge and jump towards the right wall shown on the screen, using the climbing axe to stick to it. Start moving to the left and after jumping towards the second part of the wall, head up, reaching another rocky ledge. 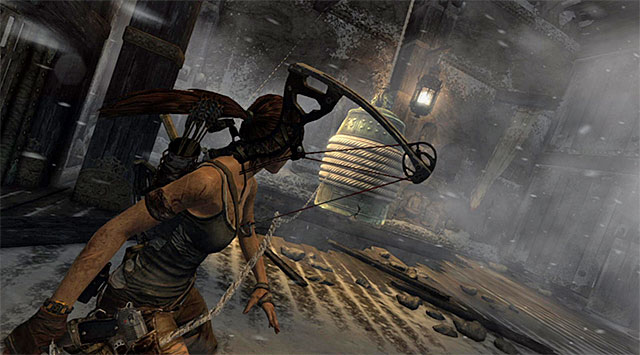 Go ahead and jump towards the upper ledge in order to get inside the building. Position yourself near the barricade and use the rope arrow on the interactive bell shown on the screen. Move away and let the bell hits the barricade, thus unlocking the further way. 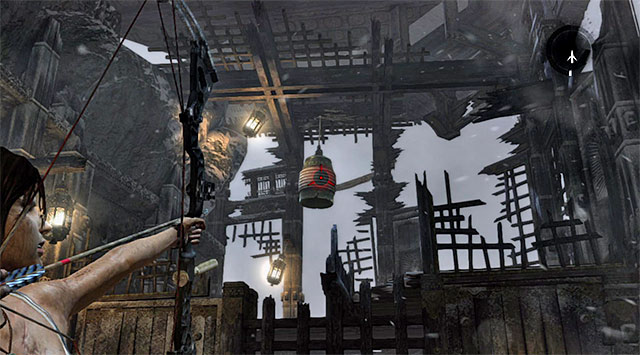 Head left and jump towards a small ladder in order to get to the upper floor. Position yourself at the edge and aim at the new bell shown on the screen, thus creating the rope bridge. 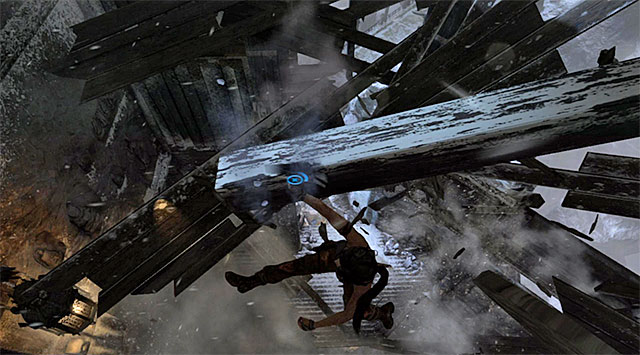 Catch the line and start moving towards the bridge. You have to reckon with the fact, that the rope bridge will be destroyed after a while. Let Lara catch the horizontal beam shown on the screen, pressing interaction key/button if needed. 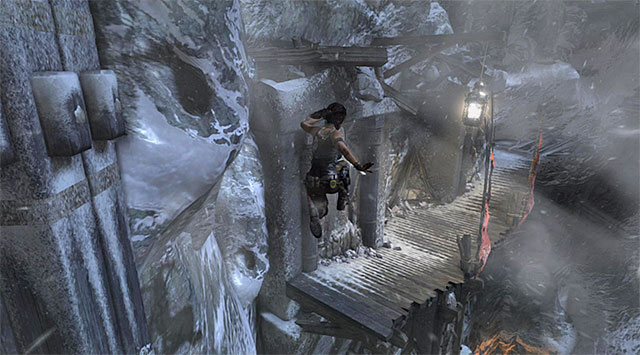 Go to the end of the wooden beam, turn left and jump towards the small platform visible in a distance. After watching a short cut-scene turn left and run over the rooftop finally jumping to the bigger mountain path. 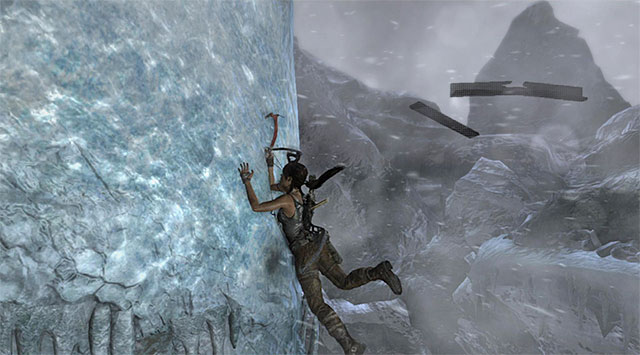 Follow the mountain path and after reaching its edge, jump. Be ready to quickly press interaction key/button at the moment when Lara gets close to the new interactive wall (screen). Start moving to the right and then up, eventually getting to the end part of this wall. 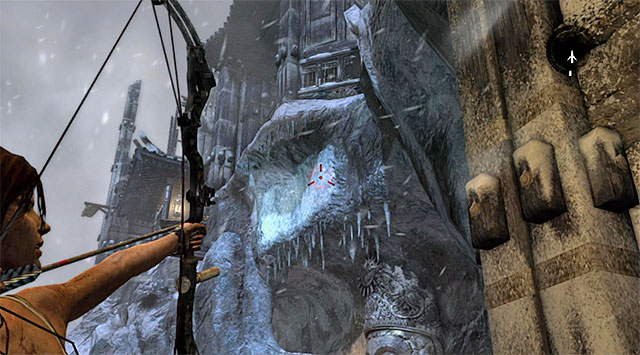 Jump towards interactive ledges located over the wall and continue climbing, getting to the new stable balcony after few moments. Create the rope bridge in a well-known way, aiming at the wall shown on the screen. Grab the line and get to the mentioned wall. 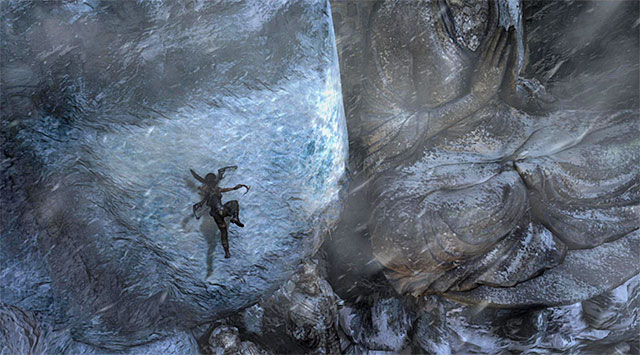 Catch the interactive wall and start moving to the left with a single jump along the way. Once you get to the end of the wall you have to let it go. As soon as Lara approaches the lower wall (screen), QUICKLY press interaction key/button. Now move to the right, towards the statue. Getting to the next stable ledge shouldn't take much time. It is worth to take a rest here at the last available camp (Ziggurat Vestibule). 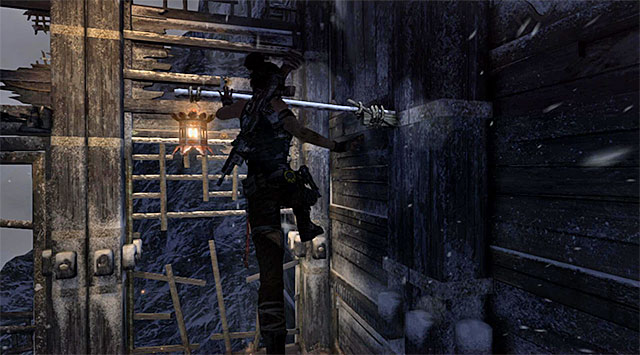 Continue your march, getting to the small ramp. Bounce off it in order to get to the beam in the wall. Let Lara jump towards the vertical wall and catch the interactive ledge. 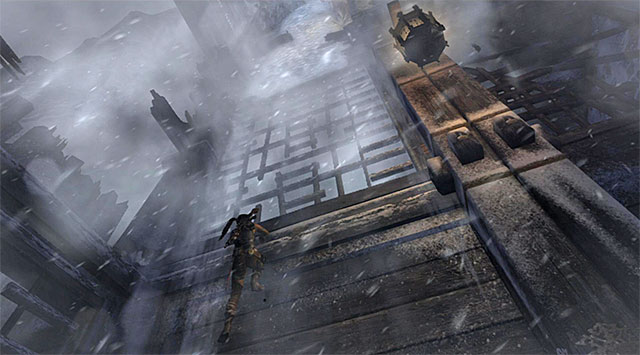 Start climbing up and after your current fragment of the wall gets destroyed, move to the right so you can resume the climbing. The main heroine will be soon forced to jump towards new interactive wall, but fortunately it is quite easy. 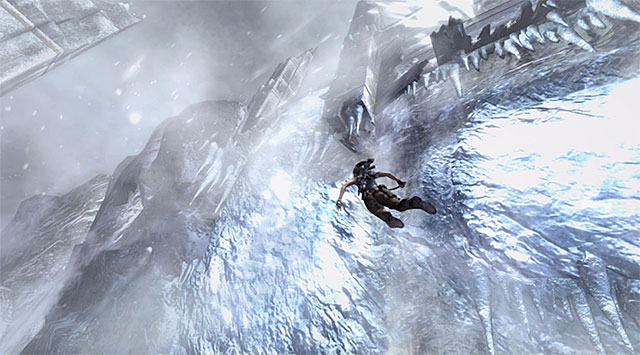 Keep climbing up, ignoring rocks falling down, because none of them hits Lara. Reckon with the fact, that along your way you'll be forced twice to jump towards new interactive walls, so do not remember about using the climbing axe. After getting to the top the game will display important cut-scene with Sam and Mathias. 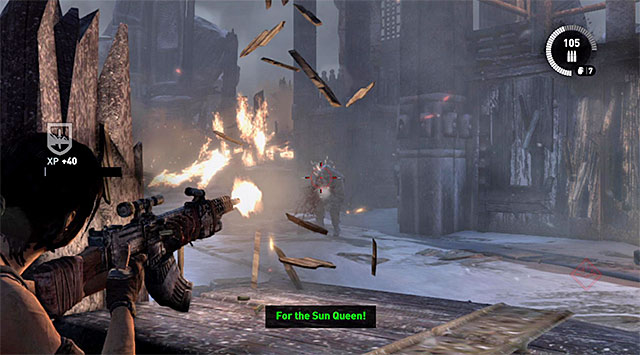 Jump down and take cover behind nearest low wall. Start eliminating approaching bandits and try to save rifle ammo, because this weapon will be very useful later (you can also try to use pistol or bow, but this is very risky, especially that many enemies use headgear). 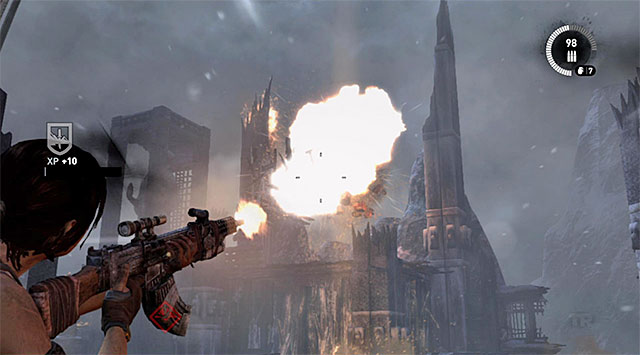 In the next phase of the fight make sure to jump between adjacent low walls, because enemies will probably throw at least one explosive surprise. Also be ready to quickly deal with bandits who will appear on balconies of the wooden structure visible in a distance (it is best to get rid of them by shooting explosive containers). 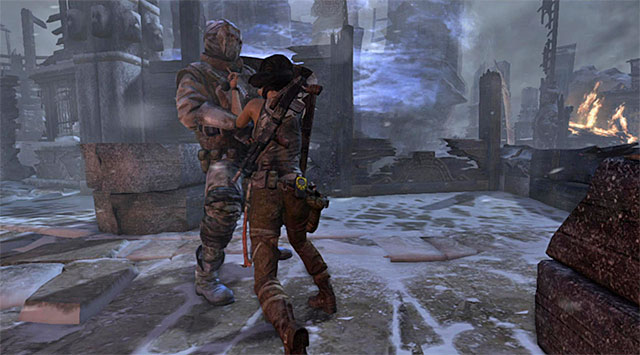 At the end you should deal with the opponent with a shield. If you only have the opportunity, kill this enemy in close combat (additional abilities needed), because it would be also good to save shotgun ammo. After the fight collect ammo and salvage points from opponents' bodies. 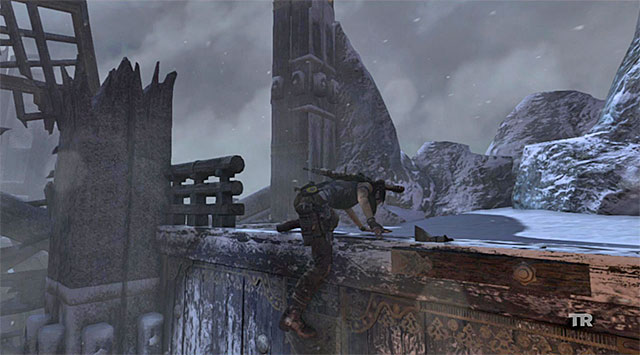 Move ahead. After reaching the burning stairs the game will display the cut-scene. Head to the right edge, where you have to jump to. Keep going and prepare to join a second fight. 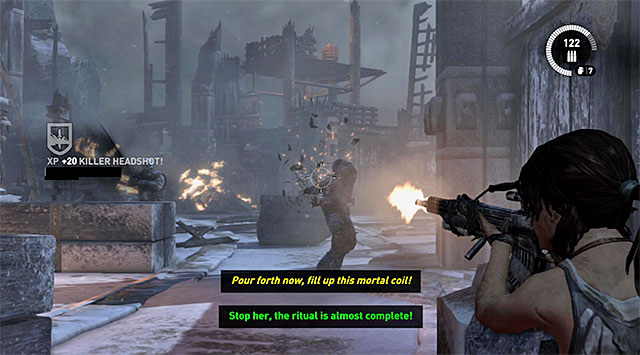 The schema of actions is in this case similar to previous fights, so take cover behind low walls and try to eliminate enemies with headshot to save ammo. At the appropriate point of the fight aim at the explosive containers left on the more distant tower, quickly getting rid of nearby bandits. 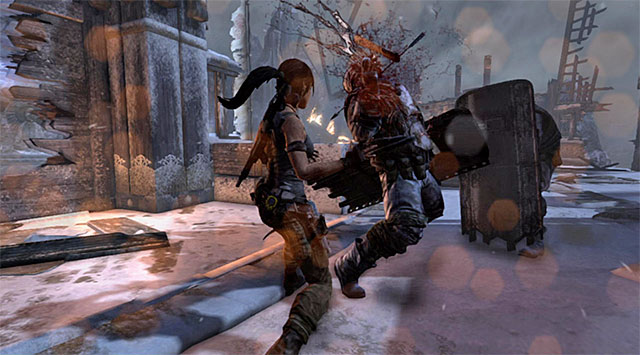 At the end, deal with two enemies with shields. Try to eliminate them one by one, relying on melee attacks or the shotgun. Same as before, after the fight try to examine bodies of defeated enemies, recovering some ammo. 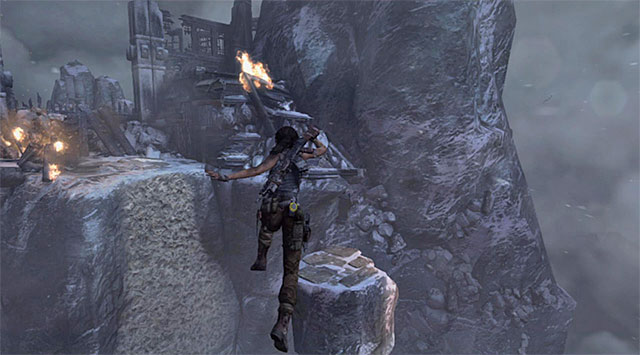 Go towards flames, which results in displaying another cut-scene. After regaining control over Lara, jump towards a small ledge shown on the screen and pull up after catching the edge by quickly pressing interaction key/button. 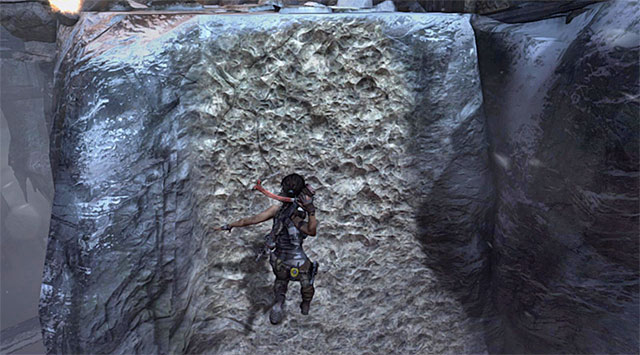 There is one more jump to be performed but you must use the climbing axe during it. Move over the wall, getting to the bigger ledge. Now go straight ahead, reaching the arena where you'll fight with giant ancient guard, being the final game boss.