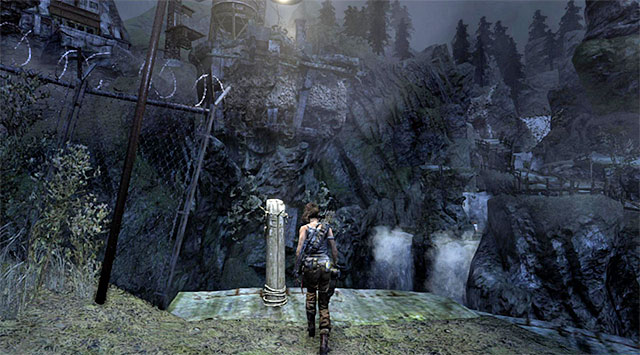 Explore the area, so you will find few new items and then position yourself at the edge shown on the screen. Use the bow and shoot the rope arrow towards the interactive wall visible in a distance. Grab the line and get to the mentioned wall (you can use rope ascender but it is not required). 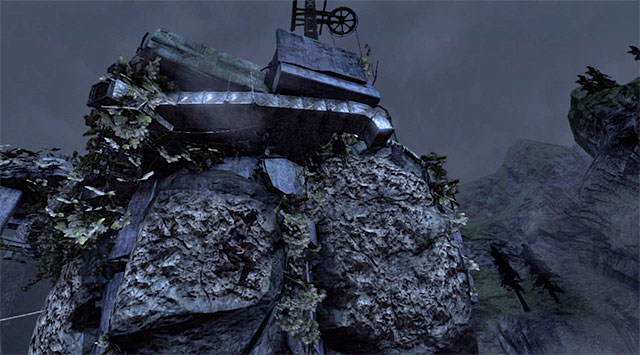 Do not forget to use climbing axe to stick to the wall. Start moving to the right, jumping to successive fragments of the interactive wall. After few moments you'll get to the place, where Lara can climb new, stable ledge. 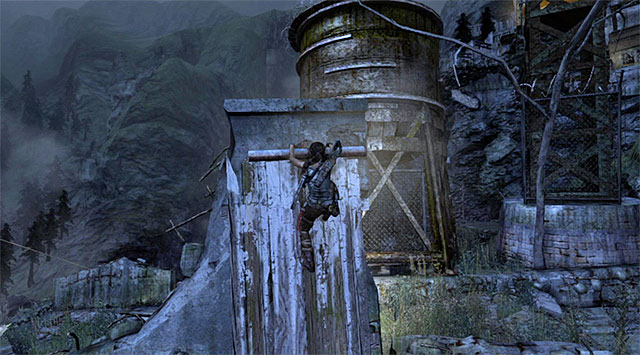 It is time for new part of climbing. Start with locating a vertical wall shown on the screen, on which you can bounce off to get to the small ledge. Now jump towards the tank visible in a distance, in order to grab one of his edges. 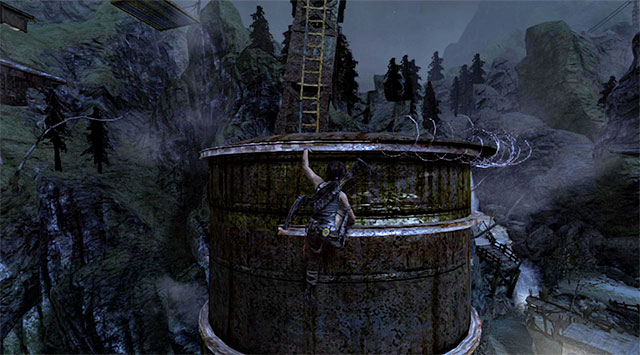 Start moving along tank's walls, looking for a place where Lara can climb up to the top of this construction (screen). Now start running to rich the yellow ladder. Climb it up, jumping to the new interactive edge at the end and using it to get to the small balcony. 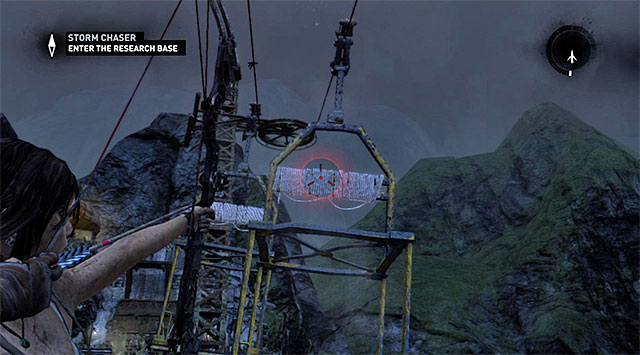 Use the bow and shoot the rope arrow towards the closer gondola cart (screen) in order to pull it towards you. Now jump to the cart. Now you have to repeat those actions with the second cart. 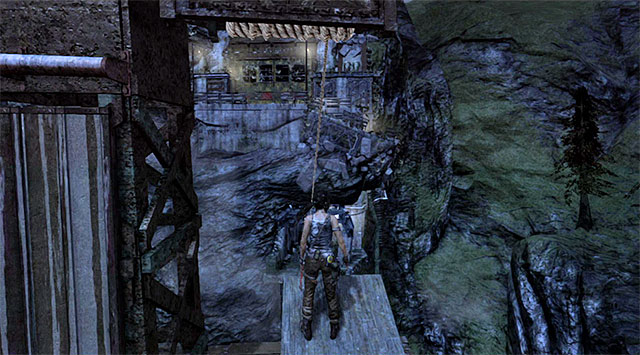 After getting to the second cart jump again and grab interactive edges of the nearby tower. Release the ledge and position yourself in such place, where Lara can use the rope bridge. 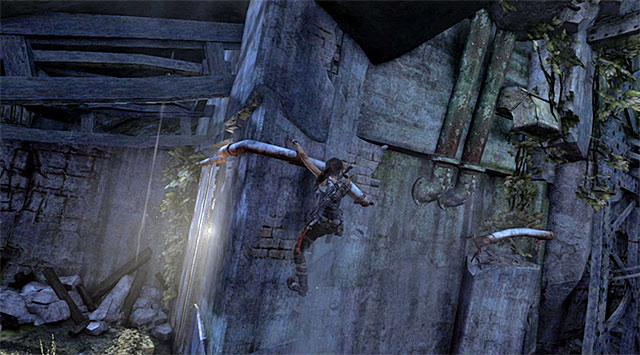 After the ride on the line approach the vertical wall and bounce off it so your heroine can grab the pipe. Move to the right, jumping to successive interactive ledges. 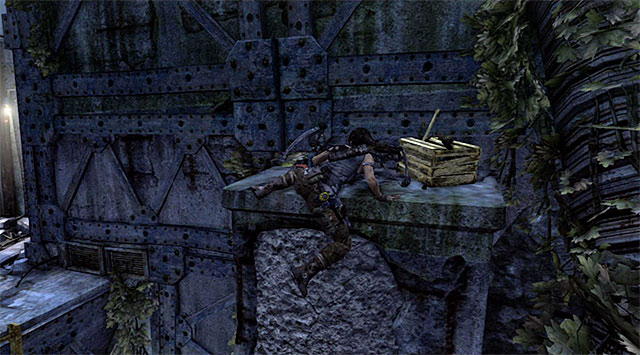 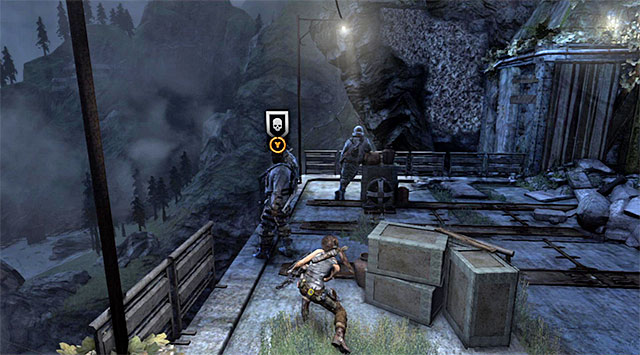 Be careful, because there are two bandits in the area. I recommend waiting until these persons end their conversation. Approach the first bandit and stealth kill him (screen). After that deal with the other opponent the same way. 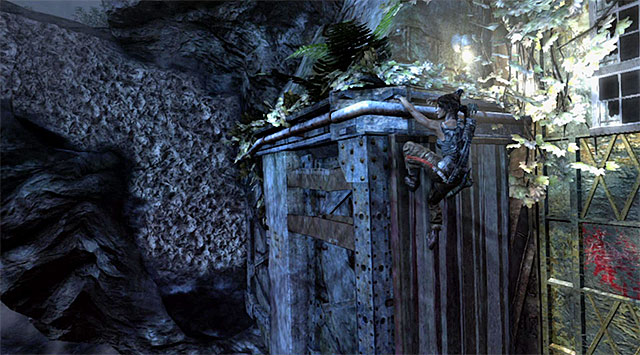 Collect ammo and jump to the new interactive ledge shown on the screen. Move to the left and jump towards the wall after few moments. Use this wall to get to the higher ledge. 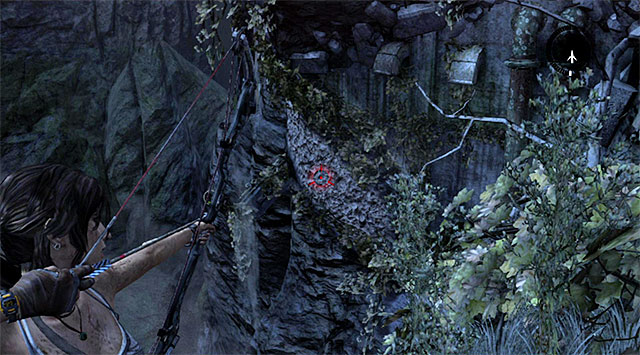 Position yourself at the edge and using the bow aim at another interactive wall shown on the screen, in order to make a rope bridge. Ride down the rope and use the climbing axe to catch the wall so you can resume the climbing in order to get to the upper ledge. 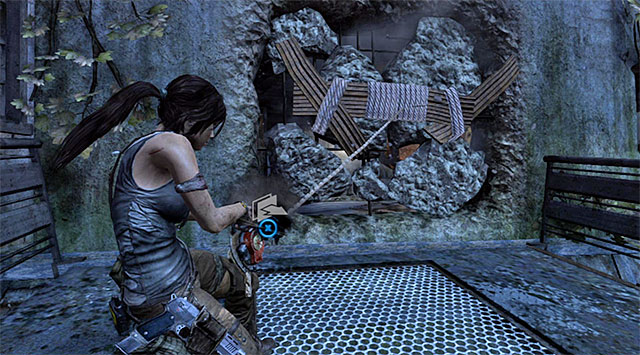 Continue ahead, preparing to jump towards the yellow ladder visible in a distance. Once you find yourself on a small balcony, position yourself left to the barricade and use the rope arrow and the rope ascender to unlock the further way. Move forwards, soon getting to the entrance to the research base (reward: 100 XP).