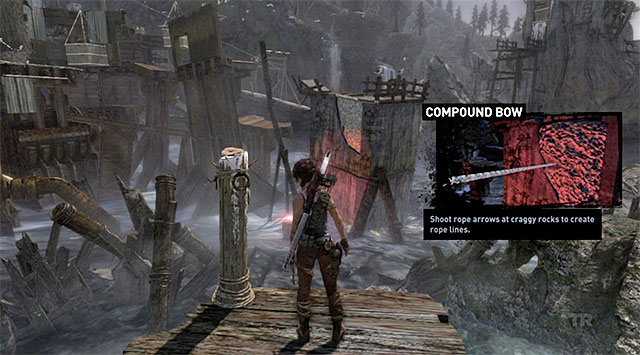 Head south-east. Your current destination is the destroyed wooden bridge. Stop to plan your next steps. 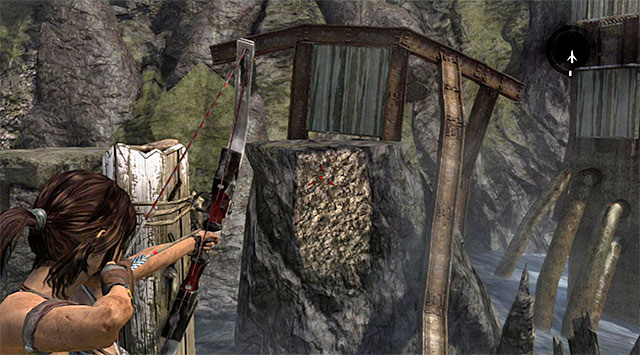 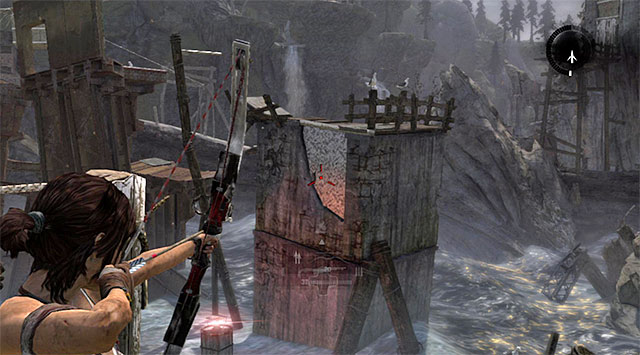 Select the newly acquired compound bow. Aim at the left (screenshot 1) or the right (screenshot 2) interactive wall. In both cases, use a rope arrow to create a rope bridge (it wasn't possible before). Grab onto the rope and make your way to the wall. Press the action button to pull up. 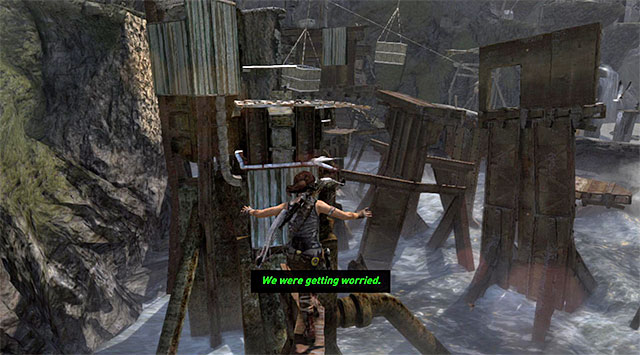 If you chose the left wall, scramble up the metal structure and go right. Leap along the platforms and make sure not to fall into the water, it would mean Lara's death in a blink of an eye. 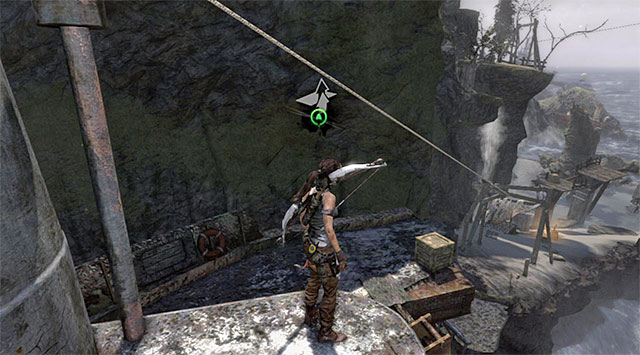 Your destination is the top level of the wreckage, which you can get to by bouncing off the vertical wall. Use the ladder to reach the rope bridge pictured above. Use it to make it to the southern area of Shipwreck Beach. 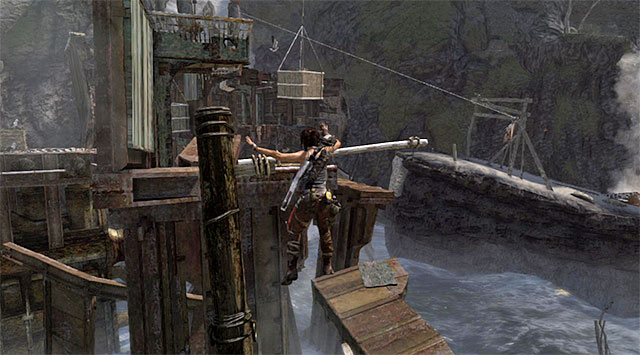 If you chose the right path, turn left. Leap along the adjacent ledges, carefully measuring each one of them. 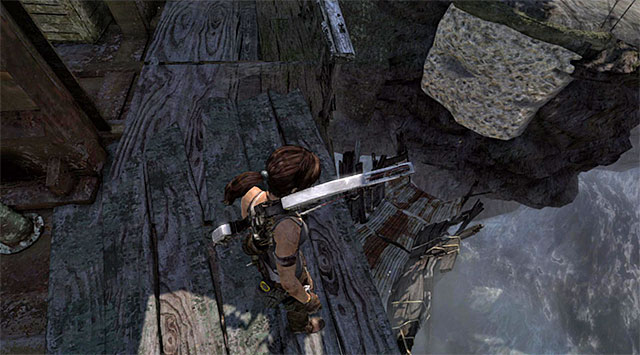 Walk over the metal beams until you reach one of the lower levels of the wreckage. Stop at the above edge and drop down. Let Lara slide down the ramp, but bounce off at the last second and use the climbing axe to grab onto the interactive wall. Go up and you'll find yourself in the southern area of Shipwreck Beach.

Note - Regardless of whether you chose the left of the right path, don't forget to look for collectibles as you go, there are many to find. 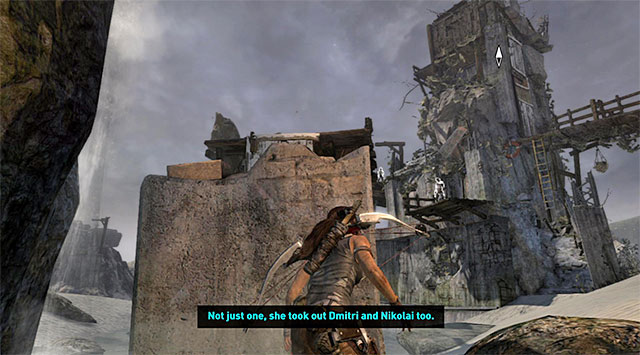 Head south, towards the lighthouse outlined in the distance. As soon as you hear guards talking, take cover so that they don't spot you. Take the first one down with a measured shot, then eliminate the other. 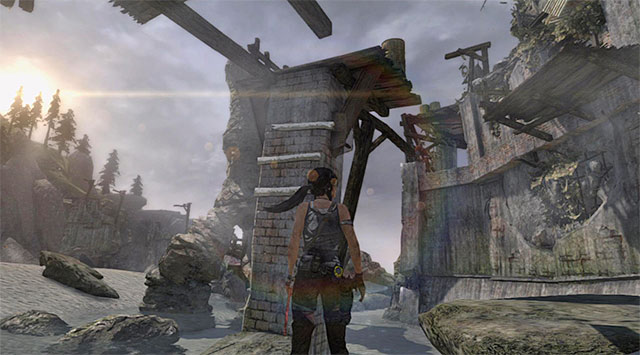 After you've checked out the southern area, locate the stone structure pictured above. Bounce off the wall to reach the first interactive ledge. Go up along the higher ledges to get to a safe wooden platform. 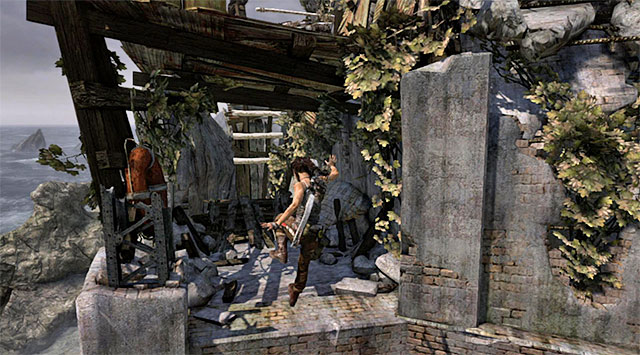 You're going to have to choose a path once again, but in truth it doesn't really matter which one you take; both lead to the top of the lighthouse. If you want to take the left one, walk over the metal beam and leap over to the ledge where one of the guards has been stationed. Go straight ahead and leap over to another set of interactive edges. 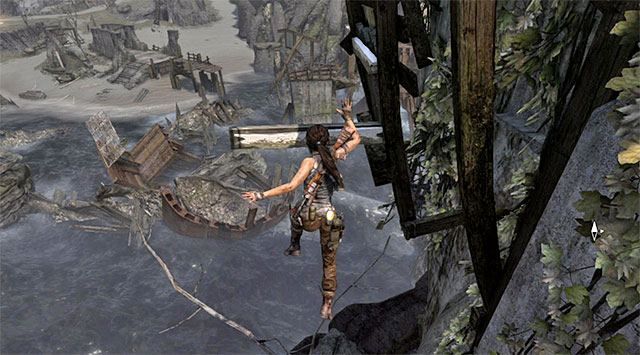 Once Lara pulls up a new ledge, leap over to a single beam that juts out of the lighthouse. Wait until the structure turns by 90 degrees, then continue the ascent. 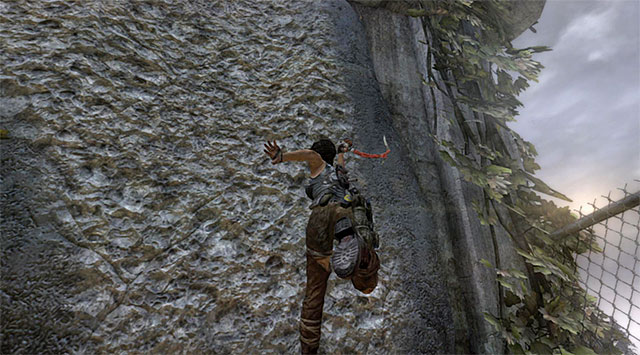 Lastly, scramble up the interactive wall using the climbing axe the usual way. 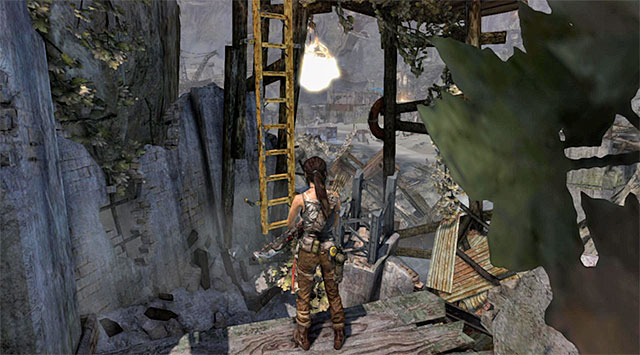 If you want to choose the right path, leap over to the ledge one of the guards has been stationed on. Go straight ahead and perform another leap, this time to grab onto the yellow ladder. 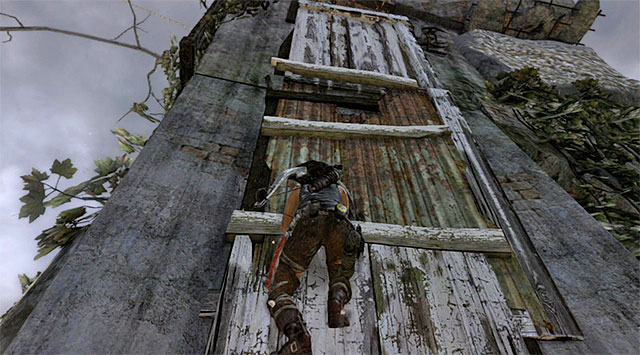 Turn left and work your way up along the edges. Don't hurry; it's easy to make a mistake here, fall down below or even die. 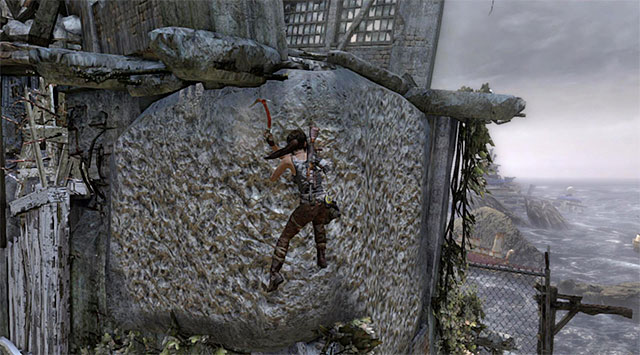 When you reach the top edge, move right and leap over to the interactive wall, helping yourself with the climbing axe. Move right until you can pull up. 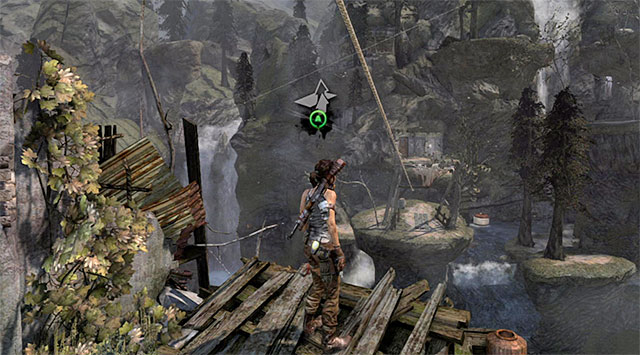 Both paths lead to the same place, which is the top of the tower. Approach the rope bridge pictured above and slide down to reach the previously inaccessible higher platforms. 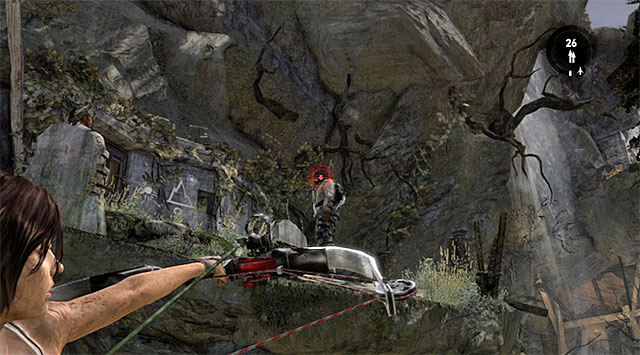 Stay behind the cover Lara should automatically take to hide from two guards in the vicinity. Try to ambush them so that they don't have a chance to fire back. After you win, take some time to examine the area, especially since there is a new optional tomb nearby. 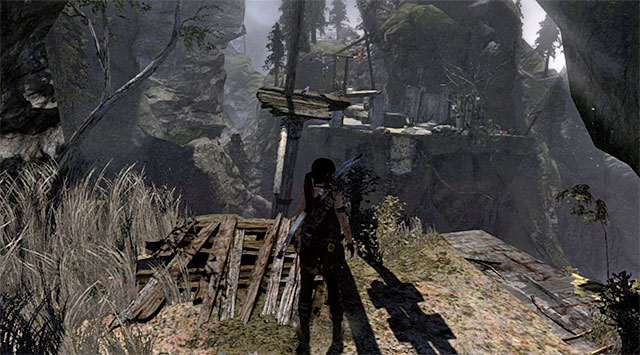 I suggest making your way to the ledge where guards has been stationed and from there heading south-east, across the drawbridge. Your destination is the edge pictured above. 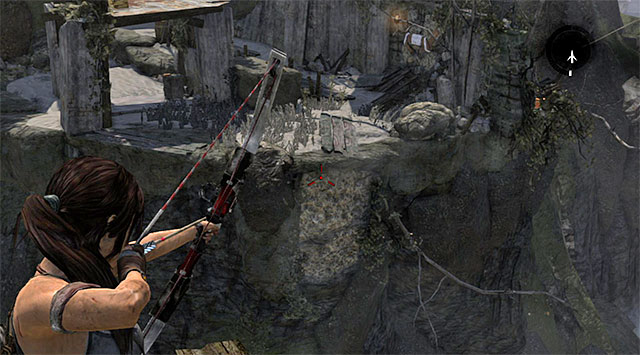 Leap over to the horizontal beam and carefully walk over it. A little further up you're going to have to create a rope bridge; do it by aiming at the interactive wall (screenshot). Slide down and pull up. You can now go down a very linear path that will take you to an entrance to a cave called Cliffside Bunker.