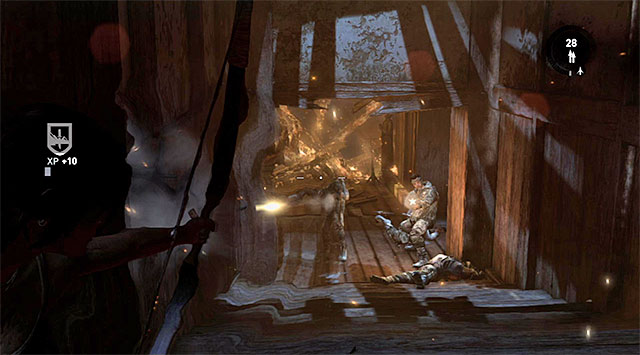 Run along the linear corridors. You'll run into the first group just around the corner. Firearms would be the better choice here, but if you feel comfortable with the bow, it will do the job as well. Watch out for dynamite sticks; get away from them immediately. 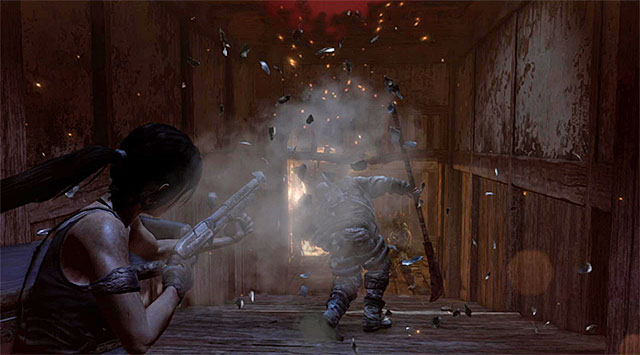 The second group will attack soon after you enter the corridor on the right. The main threat is the guy with the sword. Use the shotgun against him, but don't forget to dodge; if you get hit, you'll not only receive damage, but may become exposed to other guards. 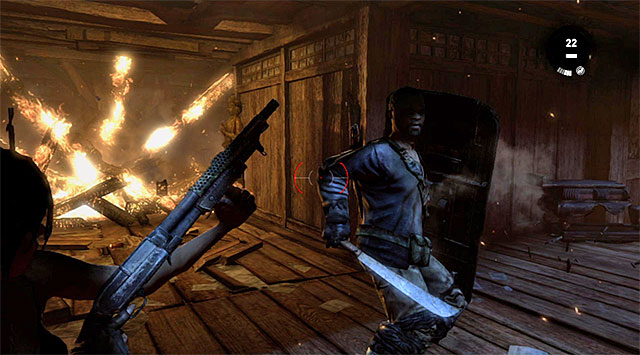 Move forwards. The third wave will be the hardest, because apart from regular guards and a sword-wielder, there's also a guy with a riot shield. Retreat to the larger room and wait until he comes after you; when he's close, dodge around him and shoot when you have the chance. 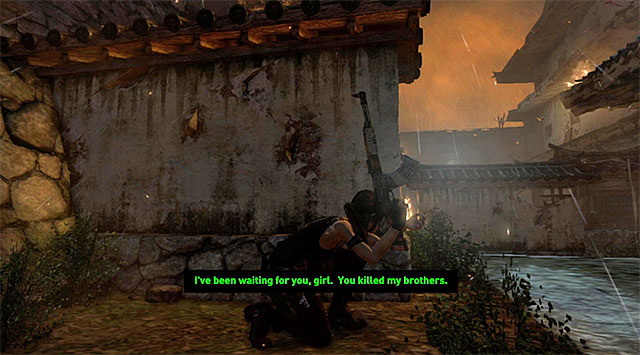 Search the bodies and head south-west. The game will soon trigger an interesting cut-scene. When you regain control, hide behind the wall on the left, but don't expect to be perfectly safe there; the wall will soon be destroyed in the exchange of fire. You're going to need to act quickly. 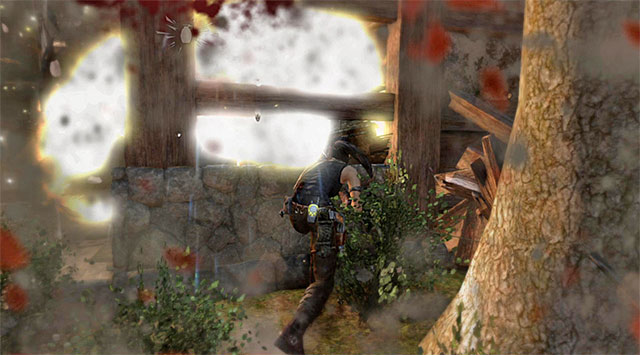 Make your way towards the middle wall, but don't stop on the way. 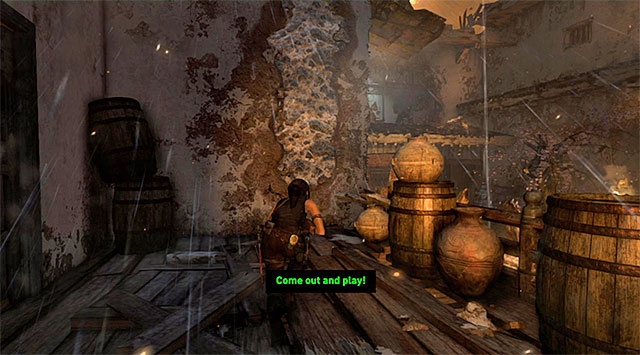 Scramble up the wall on the right. Finally, head for the stairs on the left, to an interactive wall. Use the climbing axe and go up. 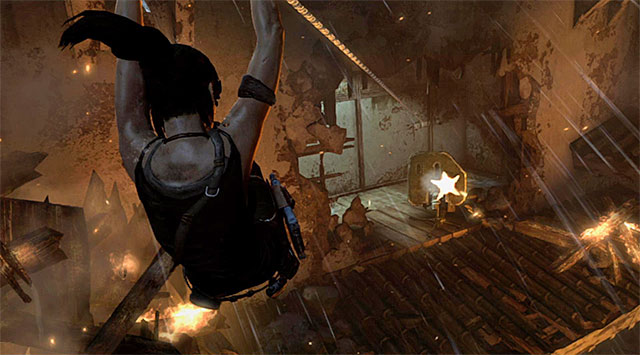 When you get to the room on the upper floor, run to the zip-line and slide down. You don't have to do anything else, Lara will automatically hit the machine gun operator. 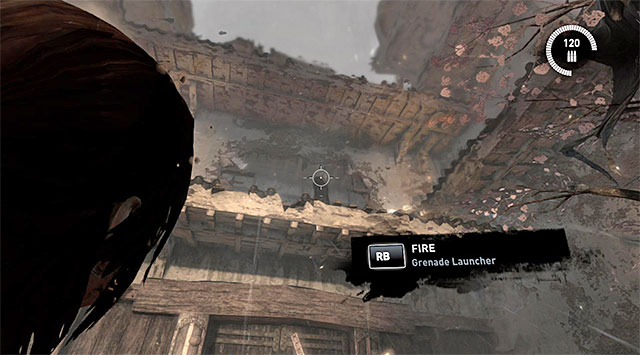 Be ready to act immediately. Aim at the machine gun operator using the newly unlocked Grenade Launcher. Afterwards, Lara will automatically mount the grenade launcher on the submachine gun (or the assault rifle, if you've upgraded it) (reward: 250 XP). 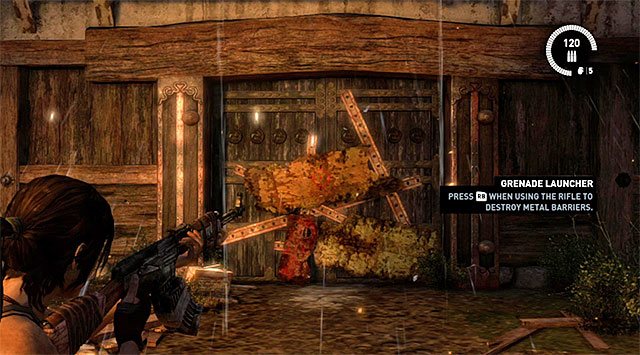 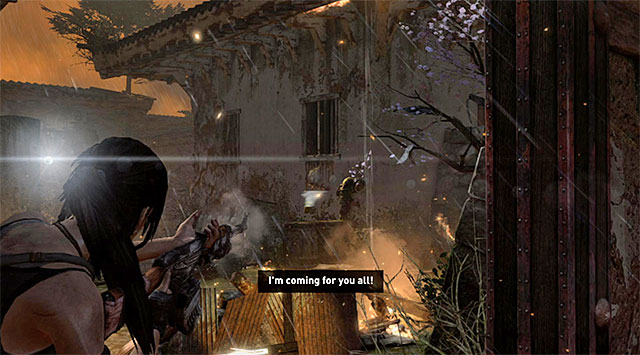 You'll find another enemy group in the next area, so it's a good opportunity to test the grenade launcher, especially since you'll be quite regularly stumbling upon ammo. Even though you have the grenade launcher now, don't be in too much rush; many guards are heavily armed and they can be a pain (watch out for dynamite-throwers!). 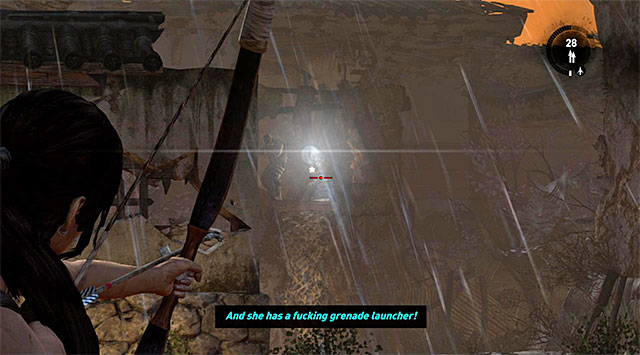 Lastly, take care of the guards around the searchlight. If you're having trouble adjusting the trajectory of the grenade launcher missiles, use the bow or firearms instead. When the fighting is over, go to where the searchlight had been; you'll discover another base camp (Solarii Fortress). It's a good time to rest and spend some Salvage points. 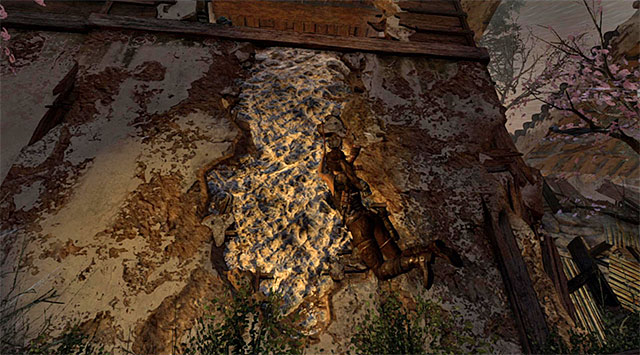 Make your way to the area around the searchlight; you're going to have to scramble up the wall using the climbing axe. Move past some burning corridors; don't worry, you're safe. At the end of the corridor, use the grenade launcher one last time to blast through the metal barrier (reward: 100 XP).