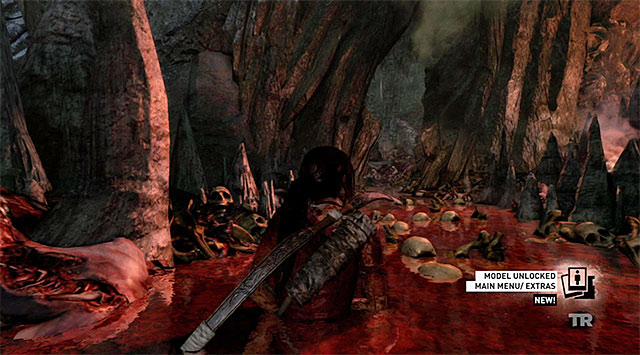 Head south, following the linear corridors. Lara will soon reach a cave in which Mathias is performing a ritual. The game will trigger a cut-scene, and afterwards you'll find yourself in a whole new area. Start by getting out of the blood pool. 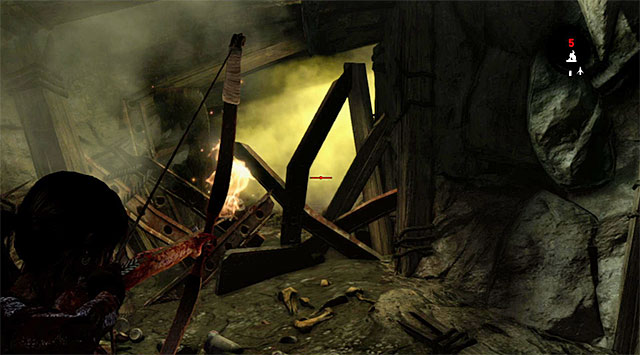 Continue east until you reach Geothermal Caverns. As you go, make sure to look around the area because there are many collectibles to find. See to some arrows by the corpse and send a fire arrow to the mist of gas. The explosion will destroy the nearby barricade allowing you to go through. 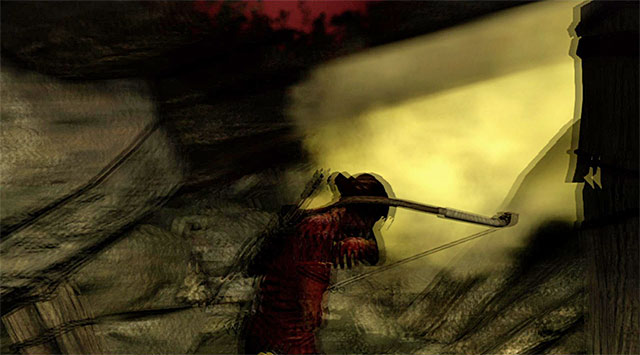 Make sure not to carry a burning torch before you past through the mist; you'll receive only some minor damage. Depending on preferences, you can make a stop at a new base camp (you could unlock the sixth Lara's Journal), or continue south right away. 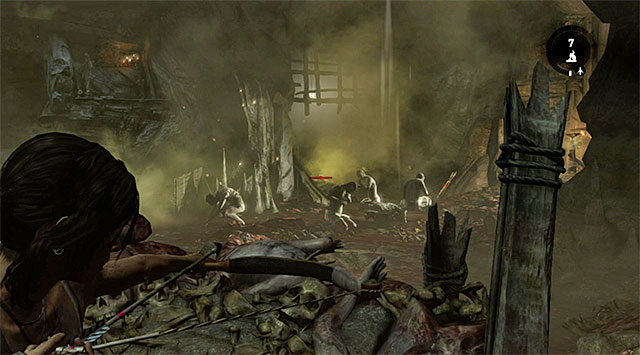 Squeeze through the rocks and watch a short cut-scene illustrating "heathens" ripping their victim apart. Turn right and go down. Take cover, aim at the gas and shoot a fire arrow. The explosion will kill at least one of the savages and scare away the rest. 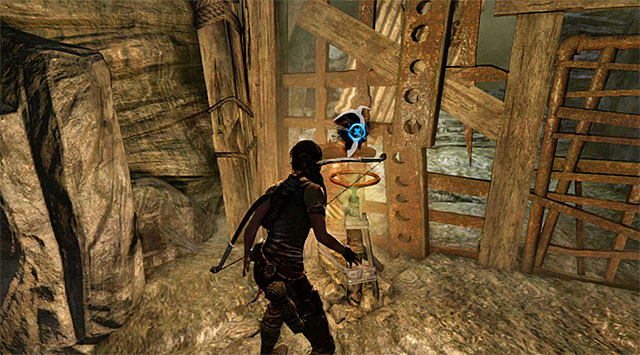 It's a good idea to take a moment and search this section of the caves; the sideway passages will lead you to many collectibles. When you're ready, locate and interact with the hand-wheel pictured above. Step back to a safe distance and aim at the gas (fire arrow) to cause an explosion that will blow up the gate. 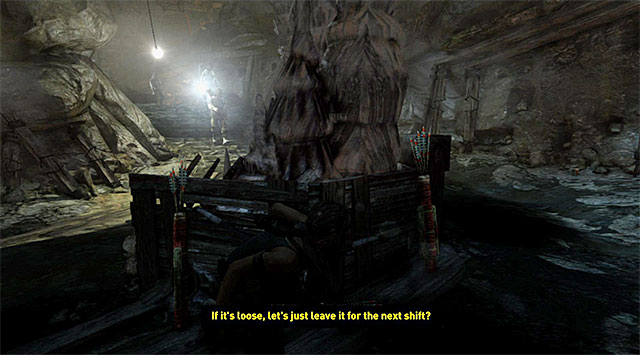 Go through the newly unlocked eastern passageway, but get ready to hide behind a cover (screenshot); two guards will start walking your way. I recommend waiting until they separate and killing them one by one (shoot an arrow at their backs or stealth kill them). 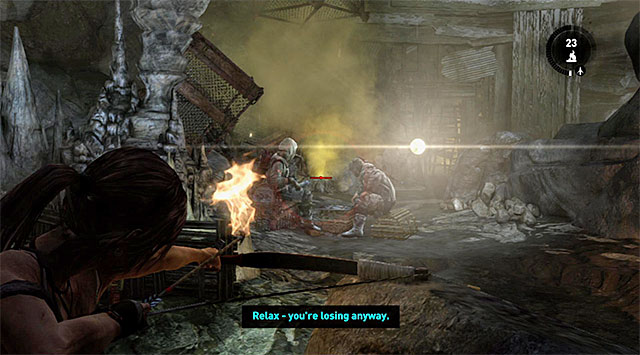 Pick up some arrows and carefully approach another group, naturally from behind a cover. I suggest sending a fire arrow towards the mist of gas (screenshot). Ambush the guards, changing covers when needed. Note - if you missed one of the guards described previously, be aware that he may flank you now! 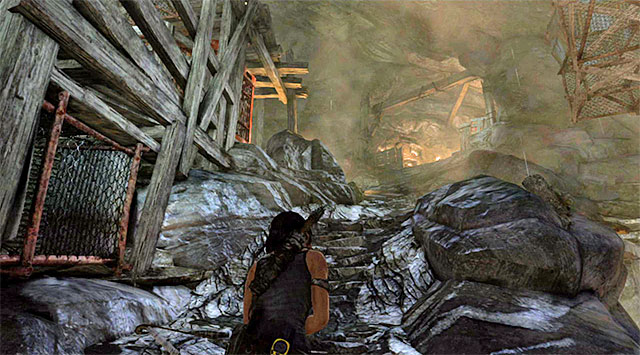 When the shootout is over, search for supplies, then make your way towards the barricaded passageway. Turn around and go up the path leading to the upper levels of the cave. There is a new base camp nearby (Catacombs), but it's not mandatory to rest there. 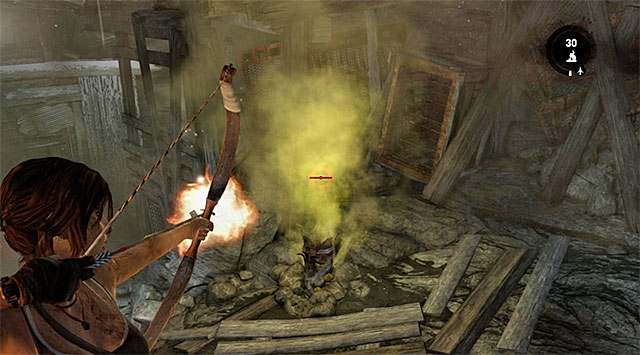 Locate and use another interactive valve. Step back and shoot a fire arrow at the gas (screenshot). The explosion will move the nearby crate. 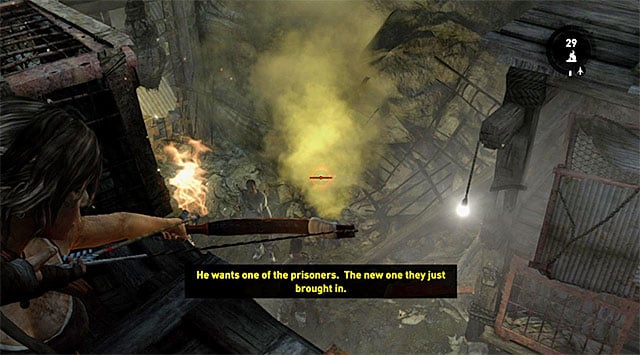 Go where the crate stopped. Jump on it and climb the higher ledge (you'll need to bounce off the vertical wall). You're now going to have sneak again. Make sure to pick a spot from which you could easily reach the mist of gas near the guards (screenshot). The explosion should kill them on the spot. 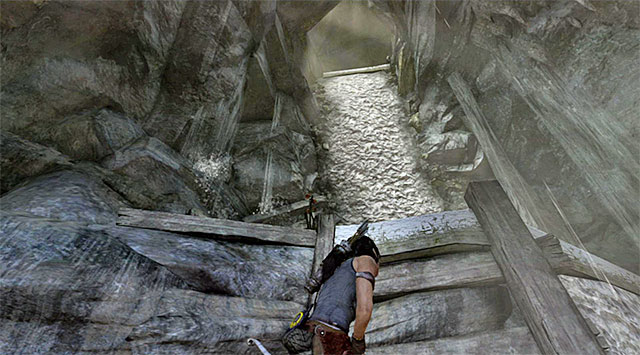 Proceed forward along the upper gallery. Your destination is the interactive wall; as you may be guessing, you'll need to use the climbing axe on it. Resume the walk once you reach the top, and soon you'll reach the fourth section of the caves. 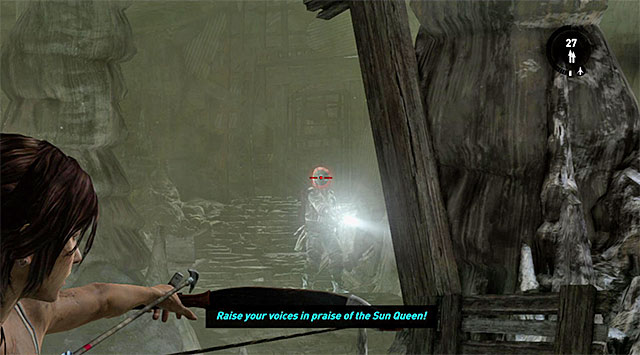 Start sneaking as you are approaching enemy-infested grounds. Sneak behind the first guard and stealth kill him. Go left afterwards and dispose of another one with the bow. 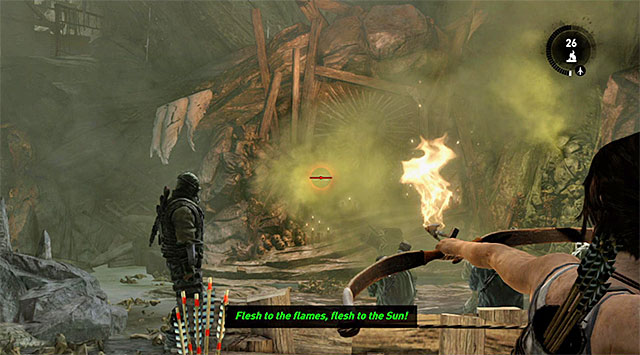 Now there's "only" the main group left. Luckily, you don't have to face them head on, but just shoot at the mist of gas (with fire arrows, of course). Afterwards, search the bodies and examine the area for collectibles. 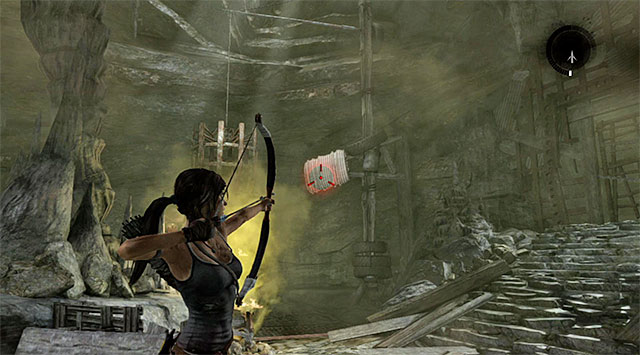 Head west to locate another valve, which you can destroy with the climbing axe. Before you cause another explosion, though, shoot a rope arrow at the indicated interactive spot to move the whole wooden structure. 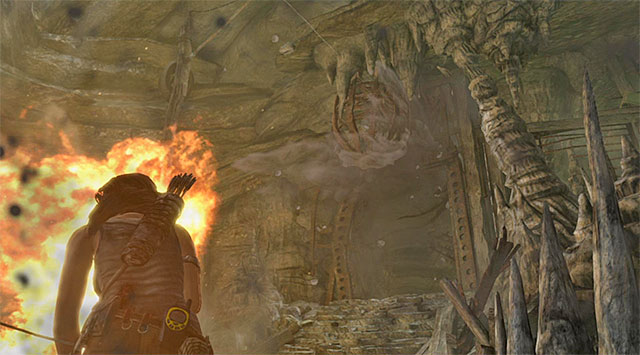 Now use the fire arrow. The explosion should move the thing out of the way and open a passageway to the right (screenshot). 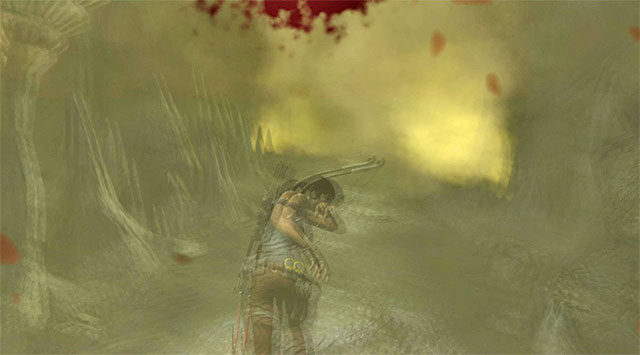 As you may be guessing, you're going to need to leave this place really fast. Go down the unlocked corridor and don't stop for anything for too long. When Lara loses her balance and slides down, you'll find yourself in a gas-filled area, so keep running to avoid poisoning. Run until you reach an interactive ledge - grab onto it to get to next section of the caves. 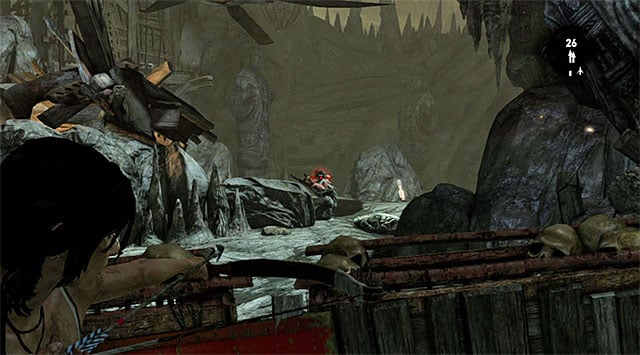 There's the last group of guards to eliminate here. I suggest starting with the single one that separated from the rest. Take care of the remaining ones, but make sure to pay attention to the guards that are going to show up only after the battle has started. 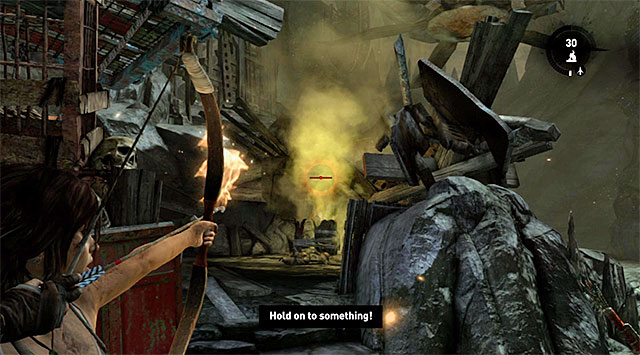 Freeing Lara's friends from the cages will involve solving a puzzle. First, go left, locate a valve and destroy it with the climbing axe. Step back and send a fire arrow at the gas, the usual way. 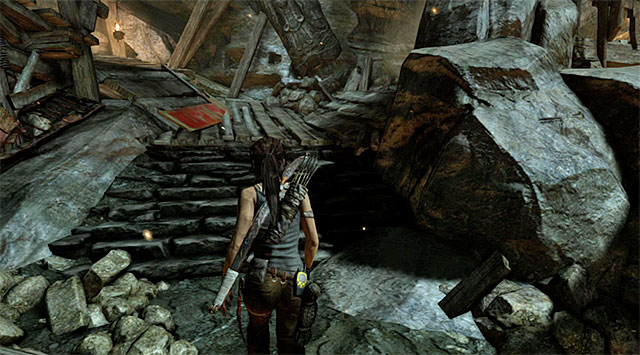 Notice that the explosion unlocked the above passage. Use it to reach the upper ledges. Leap over to the platform hanging on ropes, and from there to the cages with hostages. 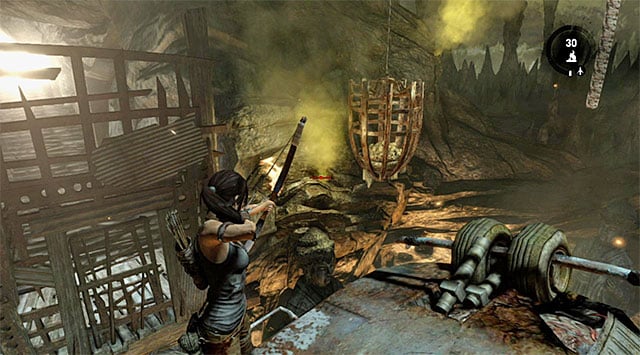 Get to the other side of the cage and shoot at the gas below, as pictured above. 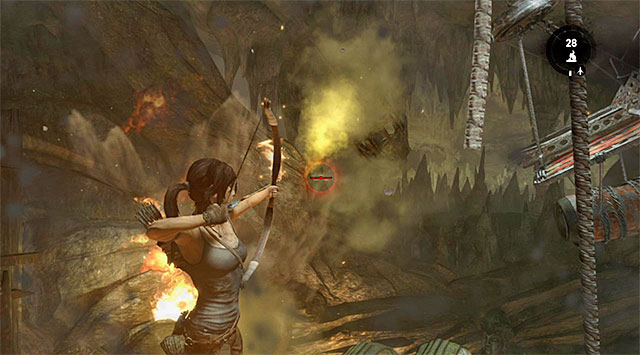 Send another fire arrow to cause another explosion. You'll need to act quickly now and shoot at the second mist (screenshot) so that the large object could move even further. If you're too late, repeat the previous steps: cause one explosion below, then a second above. 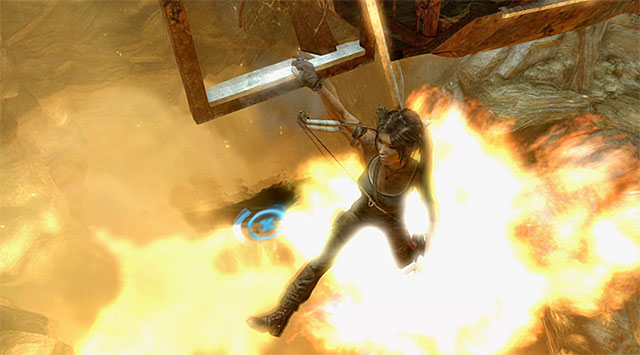 The next step is luckily less demanding, just go back on top of the cage. Watch out because Lara will let go of it and you'll have to immediately press the action button. 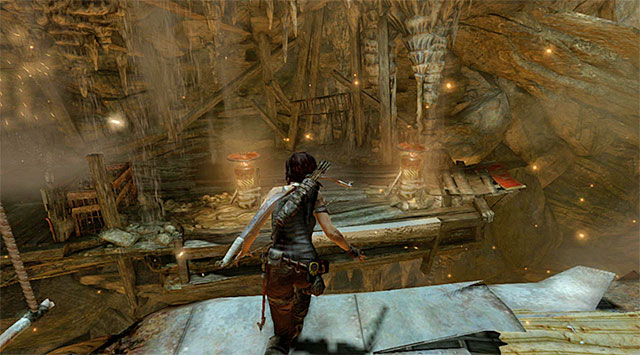 When you're back on top, leap over to the platform pictured above. Use the climbing axe to destroy the valves. 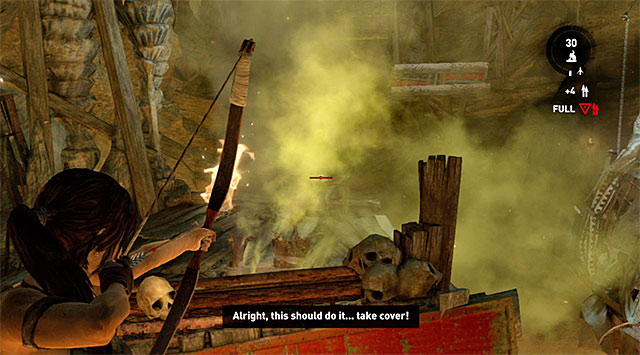 The final part of the puzzle is more complicated. Place yourself as seen on the screenshot; you should have the two mists of gas in front you. Use a fire arrow to cause two explosions at once; that's all you need to free Lara's friends (reward: 100 XP).