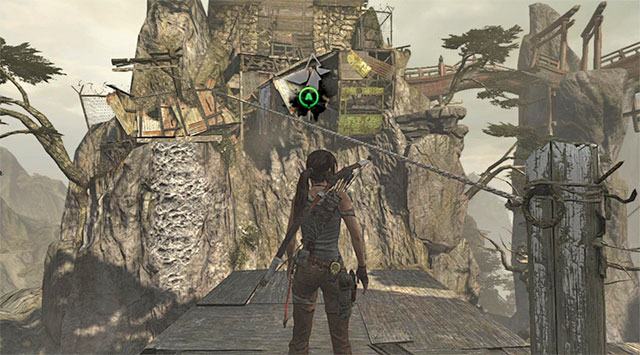 Grab whatever collectibles the enemies drop, then use the zip-line. Make your way to the top level of the building in the east, where you'll find a rope bridge leading to the eastern ledge. 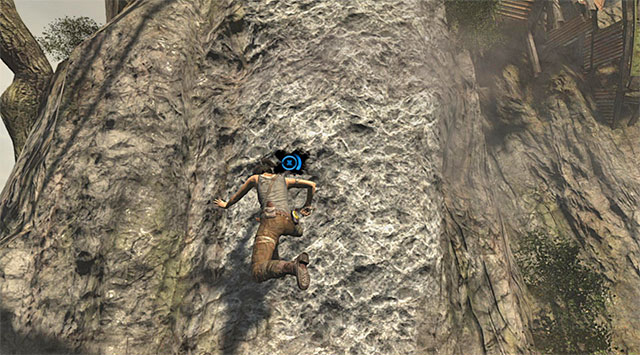 Don't stop climbing towards the eastern ledge even though some new enemies show up. In a moment they will cut the rope, so be ready to tap the action button (screenshot) so that Lara could grab onto the wall using the climbing axe. Finish the ascent and listen to a conversation with Roth (reward: 100 XP). 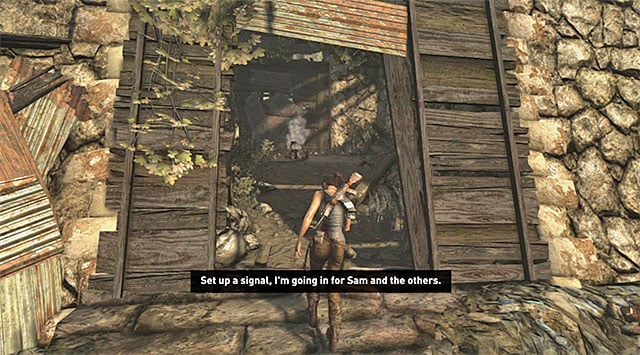 Start by leaping over to the ledge in front. Follow the linear path, past a new base camp (Vista Tower) in which you should rest. 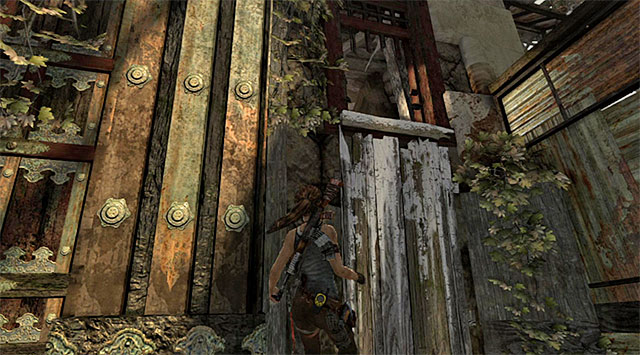 Turn north now, over the damaged wall, leaping when needed. Listen to Roth, then head for the northern building; there's a hole through which you can slip to proceed forward. 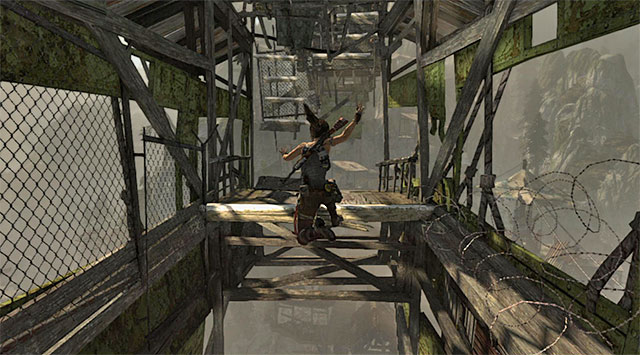 Once you're in the building, start climbing to reach the upper ledges. Soon you should find yourself under the bridge with guards on it; start by taking a rather easy jump. 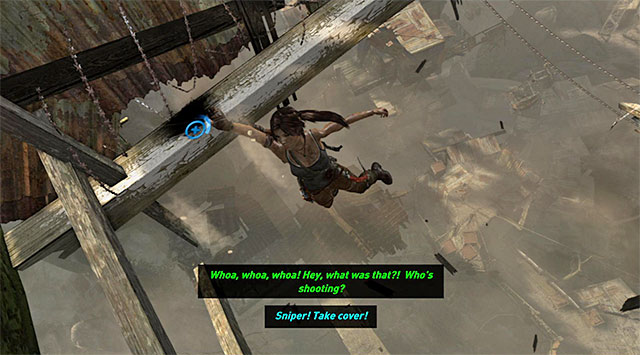 Leap over to the interactive ledges, pressing the action button if needed. Move right to reach a small tunnel underneath the main walkway. Be ready to press the action button again when Roth shoots the first guards (screenshot). 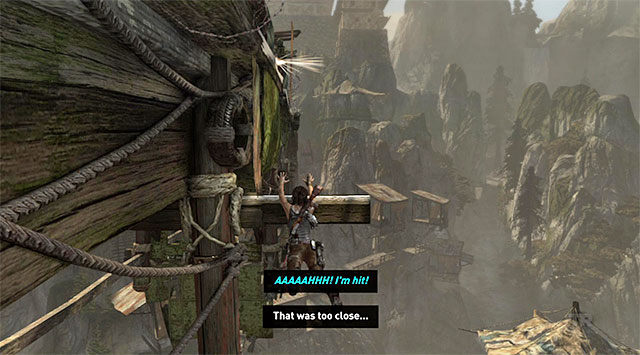 Move as far to the right as possible and only then climb the beam. Leap over to another beam and climb it as well. 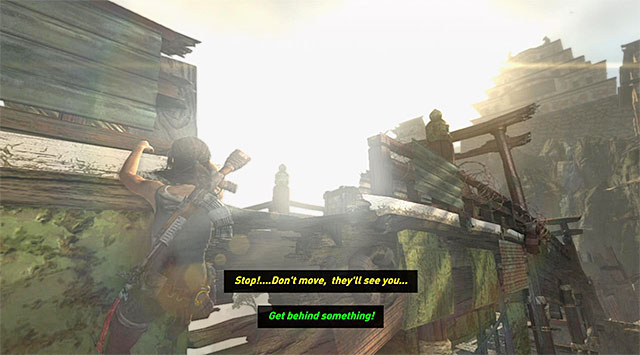 The rest of the way is schematic. Grab onto the left edge and make your way right, following Roth's instructions. When he tells you to stop (screenshot), do it so that he could take care of any nearby guards without problems. 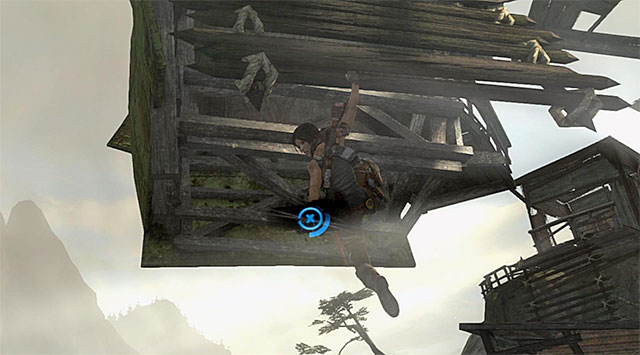 As soon as he kills the last one, attempt to climb the bridge; this will trigger a cut-scene illustrating a rough-and-tumble with one of the guards. When Lara drops him off the bridge, make sure to press the action button. Climb again. 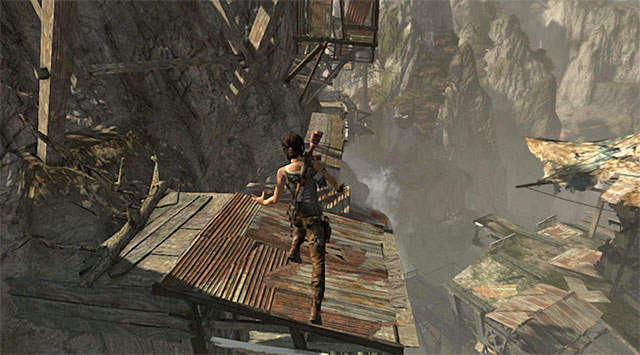 Don't except the situation to calm down; on the contrary, Lara will find herself under heavy enemy fire. Run forward without stopping. Leap over to the roof of a hut, then turn right and perform another jump. 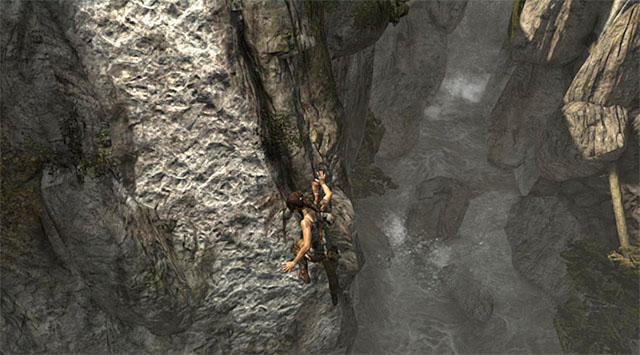 Run as far you can, staying mobile all the while. Finally, leap over to the above interactive ledge and use the climbing axe to grab onto it. Finish the ascent to reach a small ledge and listen to another conversation with Roth (reward: 200 XP). 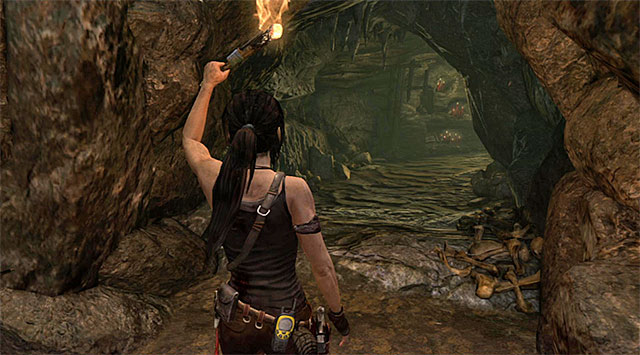 You're now in another area within the complex of caves, Cavern Entrance. Follow the linear path ahead until you reach a partially flooded corridor through which you'll have to swim. You'll receive further objectives shortly after stepping into the next area (reward: 100 XP).