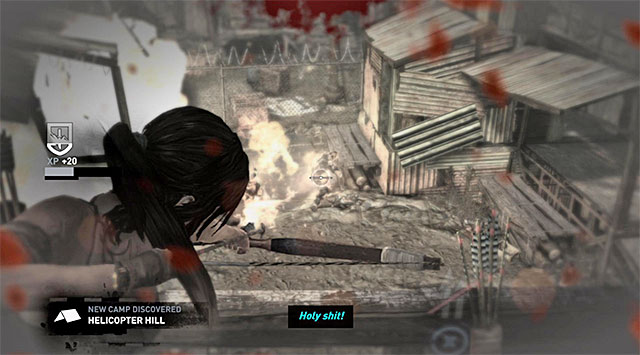 As soon as you regain control, you'll be forced into the greatest battle yet. It's good to use the bow here; the fire arrows you've just unlocked can set your enemies on fire, which, even if not killed immediately, will receive some major damage that will significantly slow them down. 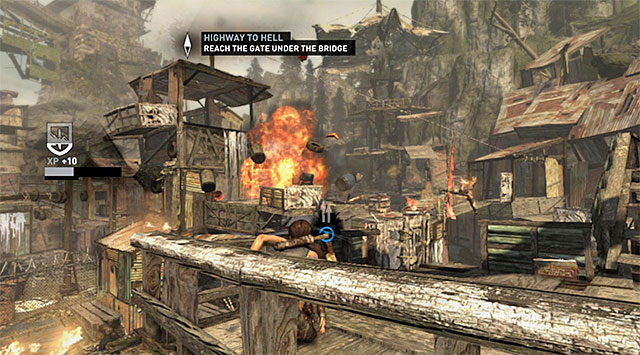 I also suggest keeping an eye out on the explosive barrels so that you can quickly shoot them when the enemies are close (screenshot); it's very helpful in clearing the area. 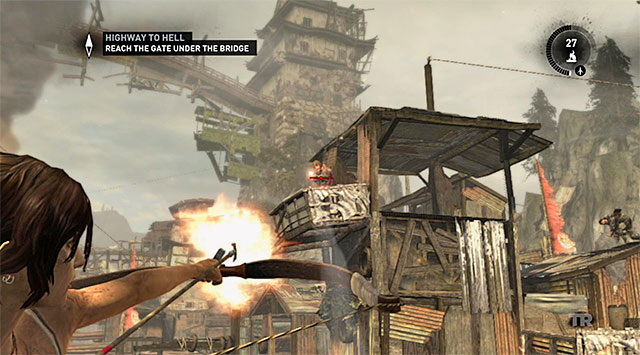 During the primary exchange of fire, look around for snipers which are occupying the higher platforms, and get them out of the way as soon as you can. Don't forget to frequently change covers if you see a Molotov cocktail land nearby. 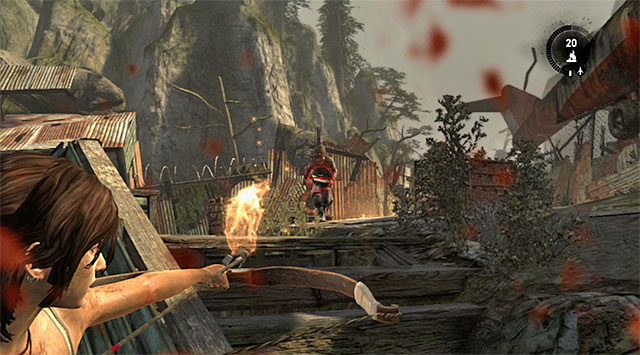 Watch the area closely; many enemies will be trying to reduce the distance between you in order to flank you. Try not to let that happen; if needed, use firearms or (as a last resort) fight them off hand-to-hand. Keep at it until all guards are dead. 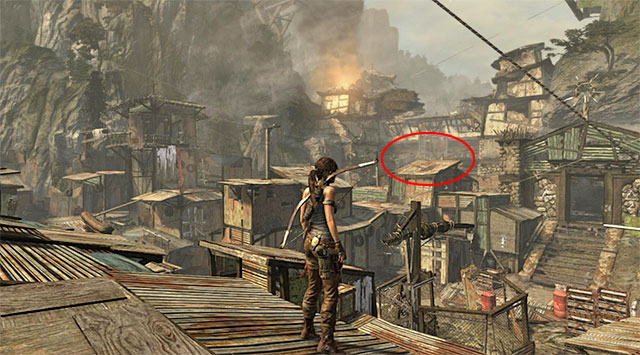 You're free to proceed to the main task. The gate that you need to reach is located south of here (screenshot). Given that the area below is separated by fences and filled with all kinds of obstacles, it's best to move along the rooftops. I obviously recommend taking a moment to look around for some valuable items and find another optional tomb. If you want to search the eastern areas, keep your guard up because you might stumble upon two additional groups of guards. 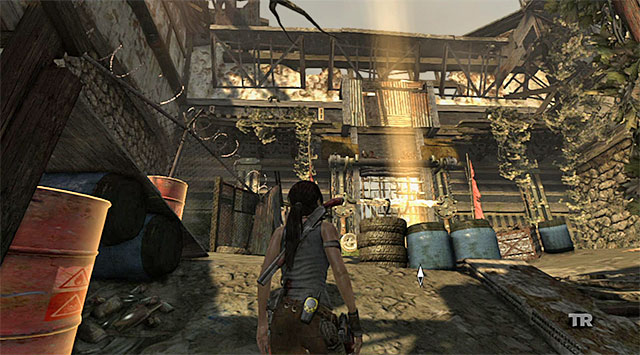 When you approach the gate (screenshot), the game will trigger another cut-scene which will end with you having to battle another wave of enemies. 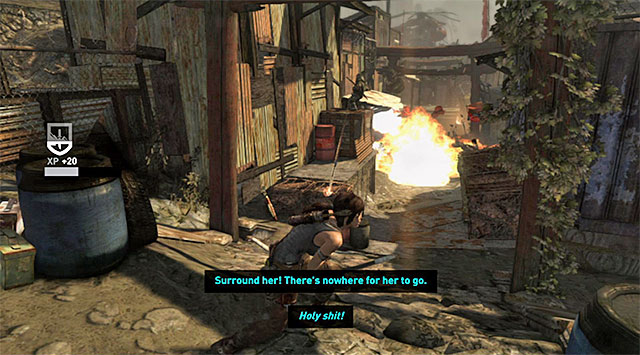 The shootout is much similar to the one which had taken place near the helicopter. Enemies will come at you from different sides, so try to keep them at bay for as long as possible. Depending on preferences, use the bow (fire arrows recommended!) or firearms, though regardless of the weapon don't forget to shoot the explosive barrels (when there are enemies to use them on). 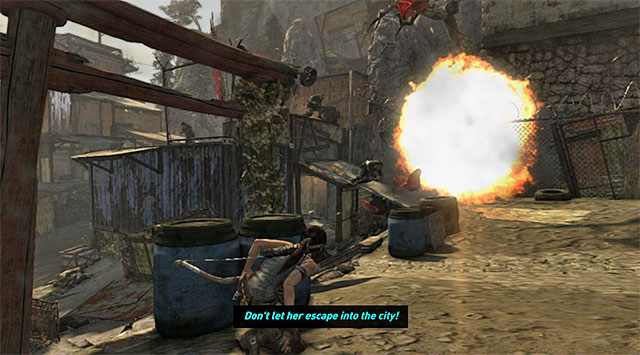 Same as before, keep looking over your shoulders since many enemies will be attempting to flank you. If needed, move between covers to prevent any loss of health either from bullets or Molotov cocktails. 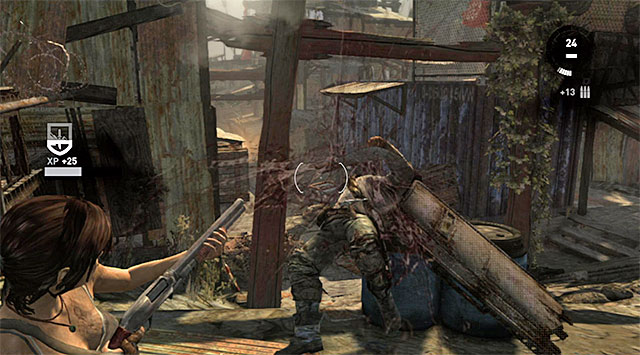 Unfortunately, among the regular enemies there will also be at least two riot shield-wielders. Let them get close, then dodge and shoot when they open up (use the shotgun; a single shot will do the trick). 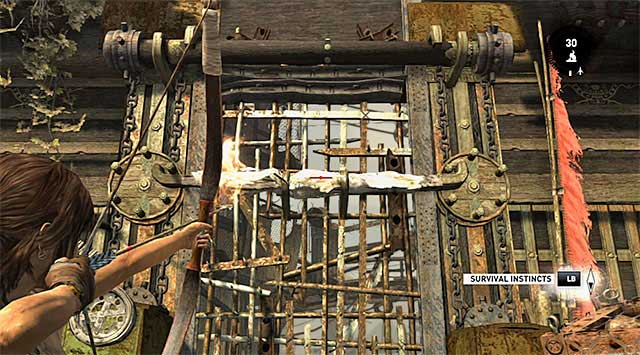 When the battle is over, search all the bodies, then backtrack to the gate. Select the bow and shoot a fire arrow at the indicated spot to set the canvas on fire. 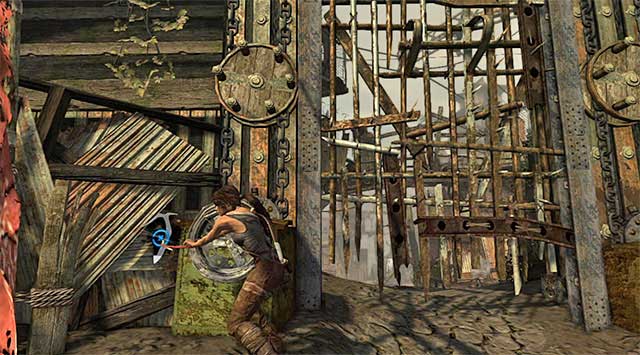 Approach the left gate mechanism and use the climbing axe (tap the action button) to unlock access to the southern area of the town, and a new base camp (Ancient Gate) (reward: 100 XP).