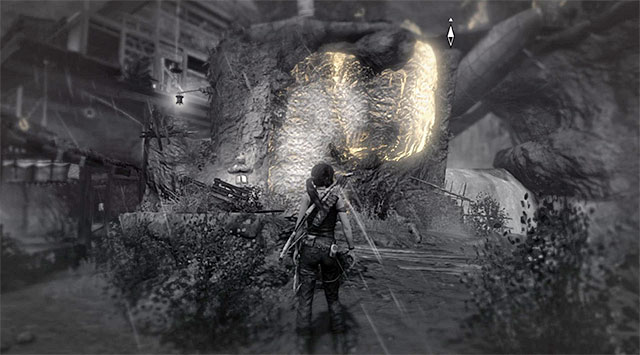 Notice that Roth has given you a Climbing Axe, which you'll soon have the opportunity to test. Before leaving this place, make sure to unlock the third Lara's Journal in the base camp. Afterwards, make your way north again, using Survival Instincts to locate the first interactive rock (screenshot). 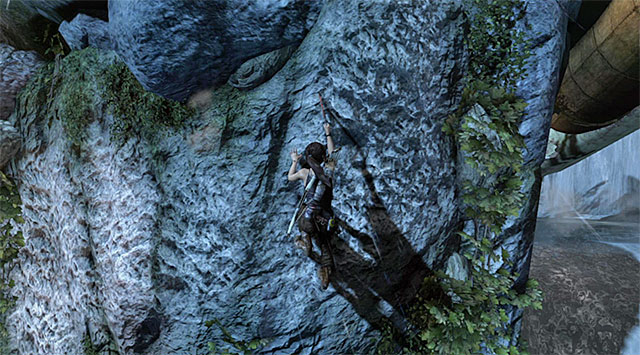 Approach it and press the action button to use the climbing axe. Keep climbing until you reach a ledge with the wing of the plane. 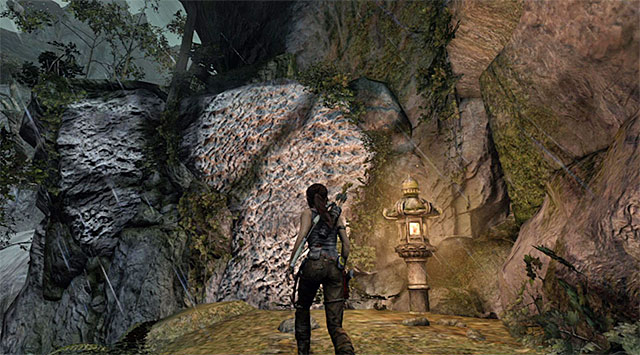 Go right, over the wing. Make your way to the ledge pictured above (use Survival Instincts to locate interactive ledges). Use the climbing axe again and head left. 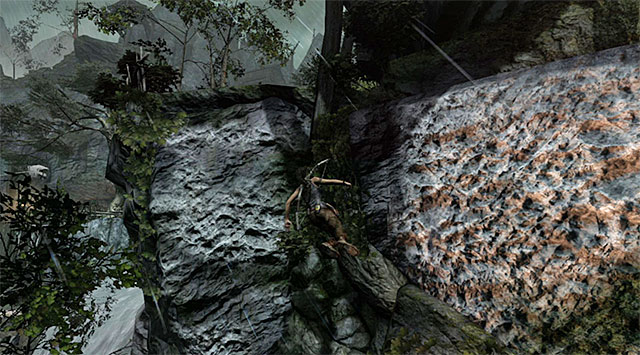 Shortly afterwards you'll have to jump over to the adjacent rock, but that shouldn't be a problem. Wiggle the analog stick to the left (or press the left directional key), hold the jump button, and then the action button in order to prevent Lara from falling. Get to the top. 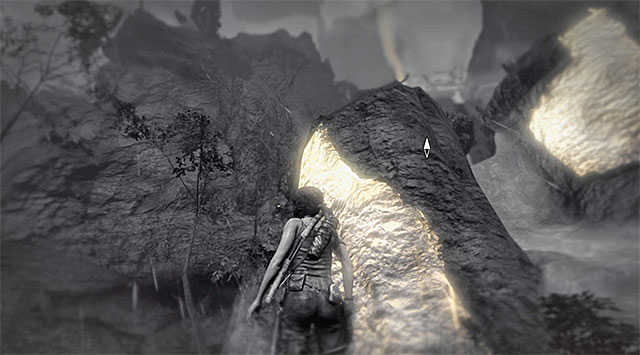 Head north-west, but notice that you'll be passing by an optional tomb (Tomb of the Unworthy) which is worth plundering. When you're done (you can naturally go back to this area further in the game), make your way towards the wolves' cave you've already visited. Find the interactive rock, pictured above, and use the climbing axe to get to the top. 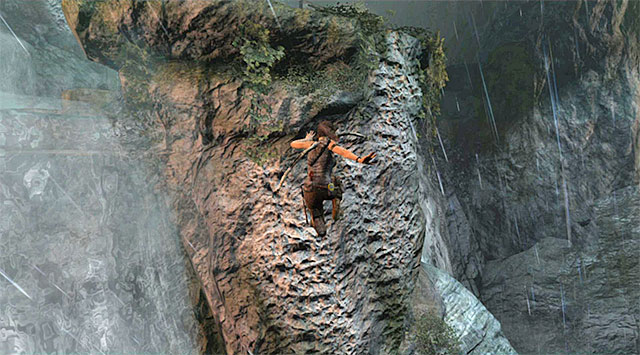 Turn slightly to the right and jump towards another rock. Right before touching it, press the action button to the climbing axe from Lara's inventory. Make your way towards the higher platforms. 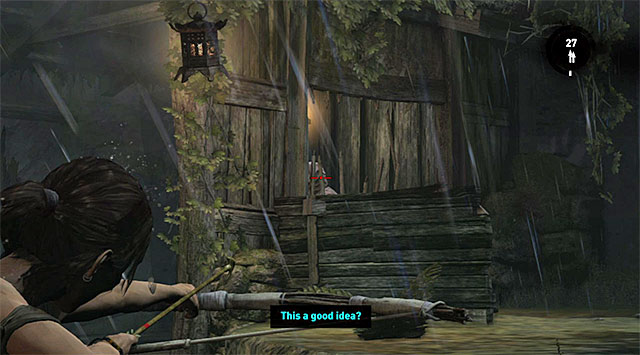 Once there, take cover as soon as you can; there are some new guards in the area. I suggest waiting until they finish talking and go back to their posts. The first to take down should be the single one to your right; shoot an arrow into his head. 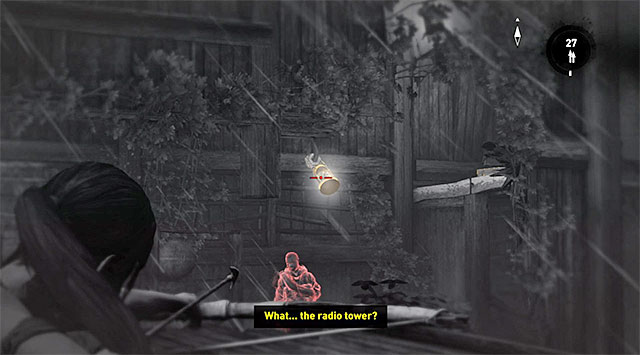 Afterwards, deal with enemies inside the building on the left. This time, aim at the lamp above their heads in order to cause a small fire. Take advantage of the commotion to quickly dispose of the guards (with the bow or the pistol). 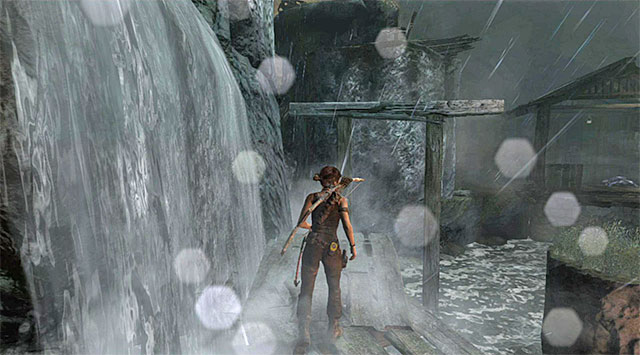 As you may have noticed, the Mountain Village area is filled with collectibles, so take a short break to sweep it thoroughly. When you're done, use the walkway by the waterfall, leap up to a beam and grab onto a ledge. 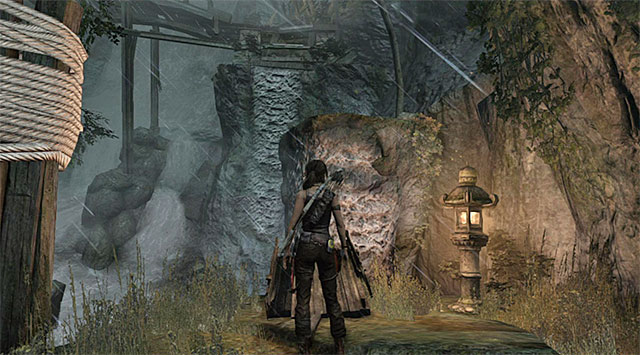 Turn left and head for new ledges to continue the ascent (screenshot). Start by bouncing off the ledge you're on at the moment, and when Lara's close to the wall, press the action button mid-air to have her use the climbing axe. 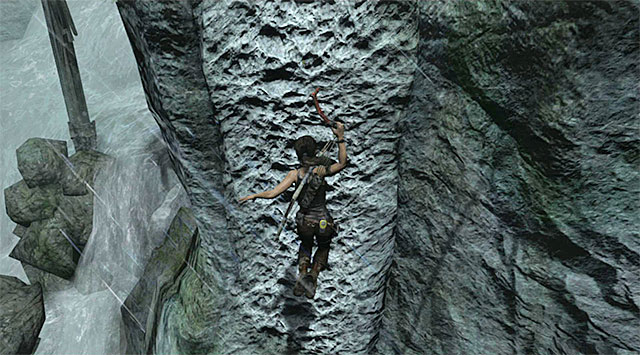 Make another leap using the action button to select the climbing axe. 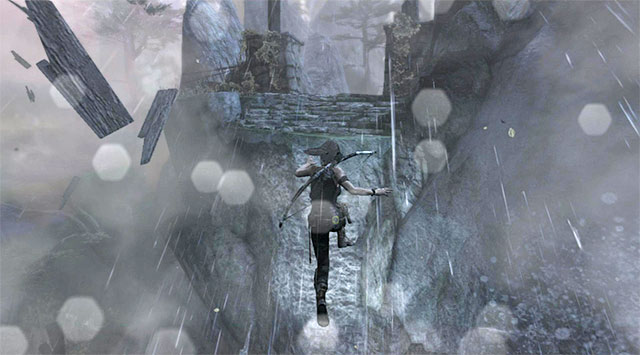 At the top, turn left and make your way to the large drawbridge. The drawbridge will collapse shortly after you step on it, but don't let that stop you: leap towards the rock and use the climbing axe to attach yourself to it. Climb to the top (reward: 100 XP).