As befits a shooter-looter, Tom Clancy's The Division 2 is actually one big tutorial throughout the first ten or so hours of the game, when the player learns all the intricacies of the game, the game world and ways to deal with new types of opponents. After finishing "all" main tasks, however, comes the time for the end game - the phase of the game, in which the main task of the players is to developing their avatar and acquiring better inventory. In this section, you will learn how to get to the endgame, what it is characterized by, and what challenges await you there.

Endgame main features and how to unlock it

To unlock access to the endgame, you need to complete all the missions of the main campaign, concluded in The Capitol. After its completion and the return to the White House, you will receive information that a new faction has entered the city - the Black Tusk and... everything was turned upside down - you'll read more about that in a moment. 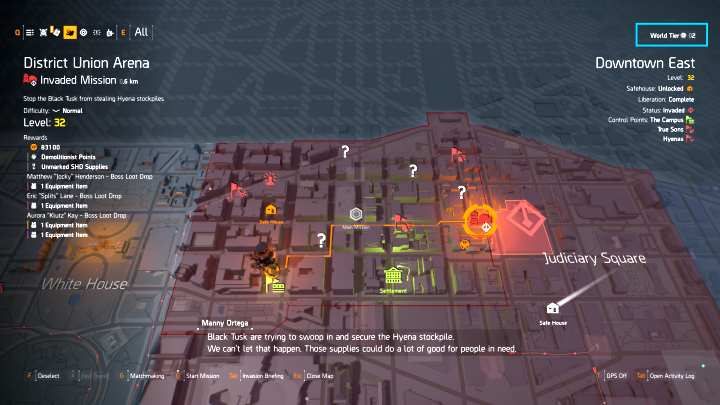 The World Tier can be checked in the upper right corner of the map.

As you unlock the endgame, the markers on the map will also change. If you open the world map and look in the upper right corner of the screen, you will find information about the World Tier. At that moment, it will be on level 1, and subsequent tiers can be unlocked along with the development of your character - that is, along with obtaining better equipment. Moreover, the description of the items will also change. These will no longer be characterized by the level of the character and the Gearscore. The higher the level, the better the quality of items and the higher their stats. The item level can be checked in the inventory - instead of a level from 1 to 29, there will be a number (298, 325, etc.)

World Tier and Getting to Higher Levels

As noted in the previous paragraph, along with entering into endgame, the world map enters the first level, which can be looked up in its upper right corner. World Tiers determine how valuable items you can find (more about that later) and how strong are the enemies you fight. At the moment, the game has 4 World Tiers:

To get to a higher level, you must fulfill two conditions - collect the necessary equipment for this World Tier (see above) and perform one of the three available missions in the Stronghold. Such missions are performed in the same way as during the main thread of the game, but you'll be fighting a new faction, the Black Tusk. When you complete this mission, the world moves to a higher tier, there will be stronger enemies and better equipment and you will have to repeat the whole process to get to the next one.

Note - at the moment, the highest tier in the world is WT4, but the developers promise the introduction of the 5th level "soon." We will update this chapter will be updated. 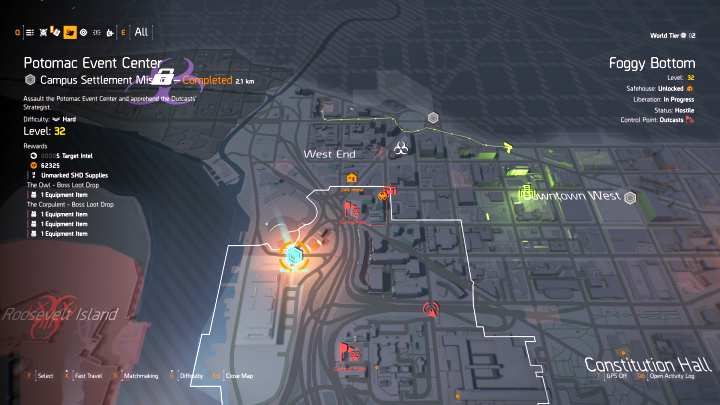 The appearance of the Black Tusk is also the need to re-perform the main missions - these, however, have undergone cosmetic changes.

Along with unlocking the endgame, a new faction, the Black Tusk, will appear on the map. Members of that faction are significantly different from other factions and bring a lot of changes to the game: