The drone is a tool that every Tom Clancy's Ghost Recon Breakpoint (or Wildlands) player gets very fast because it is unlocked shortly after starting the game. However, apart from the standard drone, there are also drones for sync shots, which work as a utility items. In this section, you will learn how to use them, how to unlock them and read tips for this type of drones.

What are Syncshot Drones and how to unlock them?

Syncshot Drones are useful items that you get access to after unlocking the skill of the same name. When you do this, open the inventory and select this item in the section in the lower-left corner of the screen (see the picture). Return to the game and select the item from the wheel menu to use it. 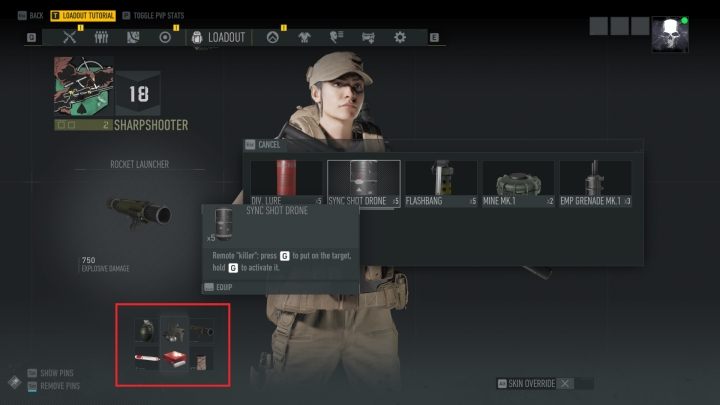 The place where you can select Syncshot Drones.

What are Syncshot Drones? This is a miniature version of a regular drone, thanks to which it is possible to mark several targets at the same time (one target per drone). Then, at any moment, you can activate drones locked on targets to immediately, and almost simultaneously, eliminate them. Thanks to this, you can, for example, eliminate a group of enemies standing next to each other without the risk of alerting nearby enemies.

However, you can equip a maximum (after purchasing additional improvements) of up to a dozen Syncshot Drones. Also, you can only mark a few targets at the same time. Fortunately, these items are easy to resupply - they are often dropped by defeated enemies, they can also be bought for 150 credits in the store in Erewhon (or during camping), and in extreme cases, you can craft them yourself.

Below you can find a few tips on the effective use of this mechanic: