During your time with Tom Clancy's Ghost Recon Breakpoint, you will often encounter enemy helicopters. You can shoot its pilot to destroy that aircraft but this requires some skill. Instead, you can use the rocket launcher - read this chapter to learn how to unlock and use it.

In Tom Clancy's Ghost Recon Breakpoint, the player starts with various useful items like grenades, first aid kits, mines or C4 charges. You can unlock more items by selecting the right abilities. The same goes for a Rocket Launcher - to gain access to it, you need to unlock the Rocket Launcher ability from the Weapons section of the skill tree. 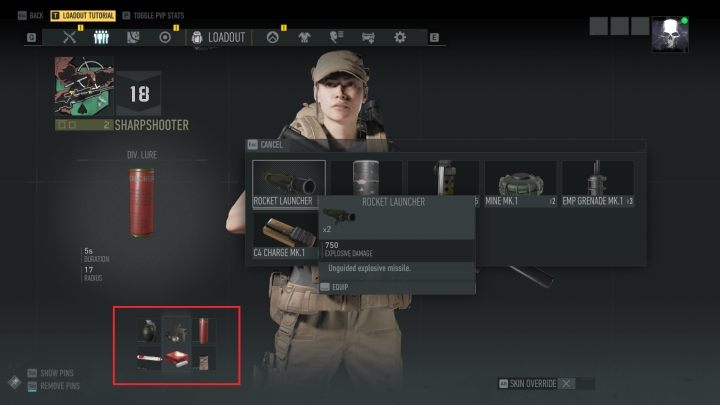 The section where you can select a rocket launcher is marked in red.

Now, open the inventory and select a rocket launcher in the lower-left corner of the screen (see the picture above). Now simply return to the game, select the launcher from the wheel menu, and then activate it with the "G" key (LB/L1 in XONE/PS4 version). After that, simply aim at the target and shot.

By default, you can carry only 4 missiles, but thanks to additional abilities, this number can be easily increased. You can resupply missiles either by buying them at a store in Erewhon, crafting them yourself while camping or by finding them in the world during exploration. Their main task is to eliminate armored targets - like helicopters - but they also work great against groups of soldiers. Keep in mind, however, that the explosion will cause a lot of noise - it will attract the attention of nearby enemies.