There are some weapon lockers here. Open them if you're low on ammunition or if you're planning on using other weapons. After that, find and pull a large lever. Don't exit the bunker right away. Instead, try killing at least 3-4 soldiers from here (screen). Sadly, you won't be able to stay here for too long, because you're an easy target. Go back to the opened gate. 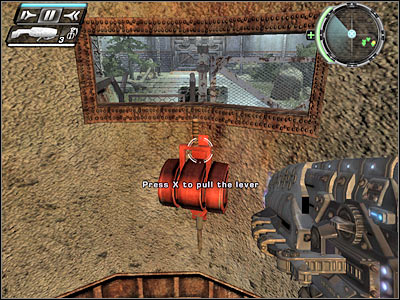 Once again, you shouldn't be in a lot of hurry. Take your time and start killing enemy soldiers. It would be wise to use the left bunker for much needed cover. Focus mostly on neutralizing snipers and soldiers equipped with jetpacks (screen). Once most of them have been killed, wait for your power bar to regenerate itself. You should also consider saving your current game. 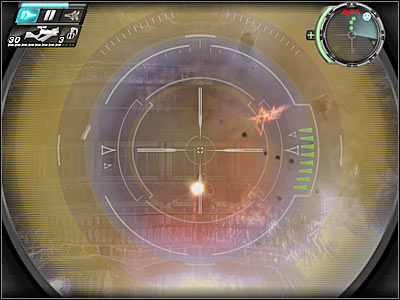 Make sure that you're ready to move forward. Start running towards the main gate leading to an enemy compound. You should activate a slow-motion feature, so you won't suffer any major injuries along the way. You'll only encounter a few soldiers here, but make sure you've neutralized them. Save your game once you're standing close to a new wall. You'll also be rewarded with a new task.

New mission objective: Advance past the mine field and activate the loading dock gate controls 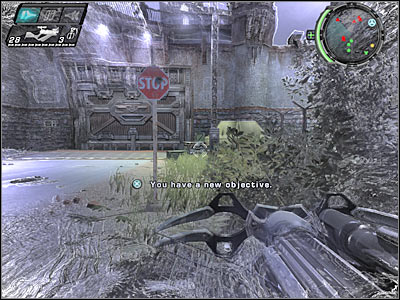 Don't worry about the snipers above you, because they won't be able to harm you. Instead, focus on the nearby crates (screen). Use them in order to jump over the fence. It shouldn't be much of a problem. DON'T MOVE once you're on the other side. It's very important, because you're surrounded by a lot of mines. Save your game here. 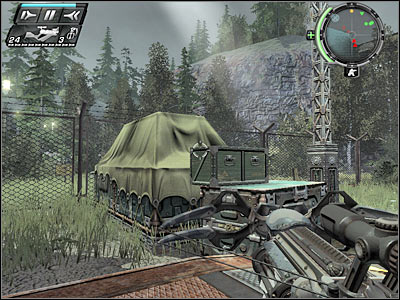 You had to go through a very similar mine field in one of the previous mission of the game, so you should know that you must be on a look out for red lights (screen). I'd strongly recommend that you stay close to the left wall of the base. This should allow you to get to the other side of the mine field without any problems. Just make sure that you're moving slowly. 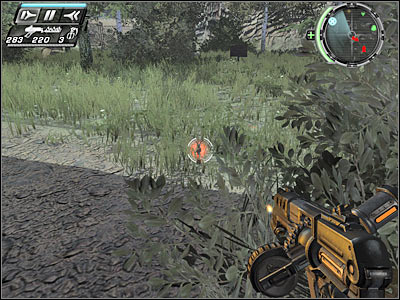 Now you must get closer to an electrified fence. You will have to solve a very simple puzzle here. Activate a time stop function and jump over to the metal platform (screen). This will allow you to get to the other side without sustaining any injuries. Turn right and start running forward. It's very important that you hide behind a green container, so you'll avoid getting shot by enemy troops. Save your game here. 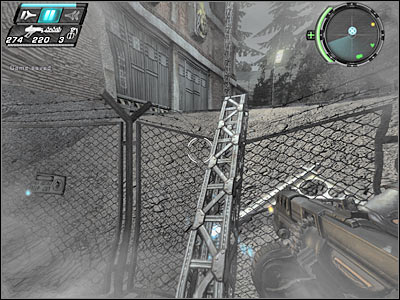 Some of the enemy soldiers will probably try advancing towards your current position. Most of them will appear to your right. Make sure that they have been killed. Once this is done, focus your attention on enemy snipers. There's going to be a lot of them in this area, so your hands are going to be full. Don't leave this cover unless you're absolutely sure that all soldiers are dead. 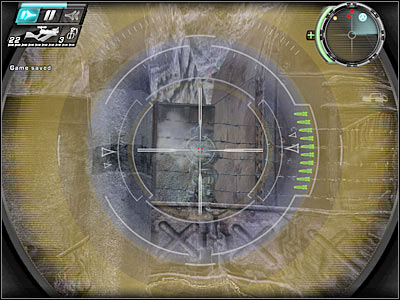 Proceed towards the stairs. You should be able to find a small entrance here. Use it to get inside this new building. Explore some of the surrounding rooms. You won't encounter any enemy units. Instead, use the stairs to get to the upper floor. You'll be able to pick up a crossbow along the way. Head on to the balcony. As you've probably noticed, you will have to kill several snipers from here (screen). Make sure that you've used slow-motion, so you won't get shot by any of them. Once they're gone, head on to your left. 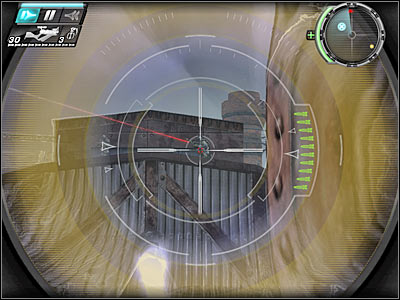