You will probably notice that an enemy soldier has appeared in front of you. He's carrying a rocket launcher, so you must kill him with a little help from a slow-motion feature. Once he's gone, pull the lever in order to retrieve the moving platform. Now you must pull a second lever (while standing on the platform), so you'll start moving towards a dead soldier. You will also have to deal with a second enemy unit, however he will appear once you're very close to your target. Kill him and leave the moving platform. 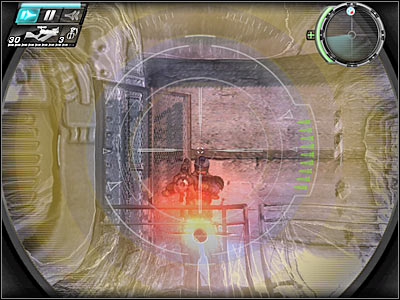 You don't need to have a rocket launcher, so you may enter this new building complex right away. You will only encounter one enemy unit along the way. Eventually you'll come across a corridor filled with laser traps (screen). You've dealt with a similar threat before, so you shouldn't have any problems figuring out what has to be done here. Make sure that you're using a time stop function to avoid the lasers. Your goal here will be to reach a far end of this corridor. There's an enemy soldier standing there. Kill him as soon as possible. 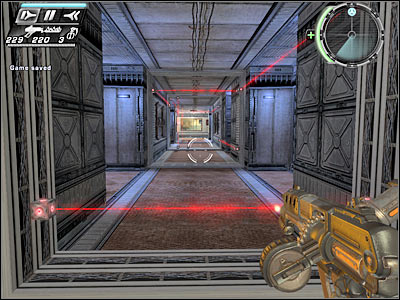 You may proceed towards a new room. Once you're inside, find a small ladder. Using it will allow you to get to one of the upper levels of the building complex. Keep heading forward. Eventually you will have to reach a much larger hanger (screen). Start off by killing some of the nearby soldiers. Once they're gone, check their bodies and wait there for other enemy units to come to you. You should also familiarize yourself with a new mission objective.

New mission objective: Activate the lift then board the Drop Jet 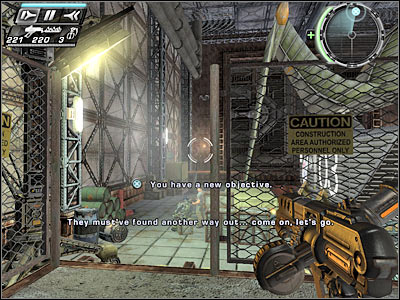 Like I've mentioned before, you should consider waiting here a little while longer. You'll notice enemy units in the distance (screen). Use your crossbow to take care of this problem. After that, use a lever in order to open a hanger door. Leave the hanger and start moving forward. Eventually you'll come across two enemy soldiers. Kill them and head on to a designated area of the map. 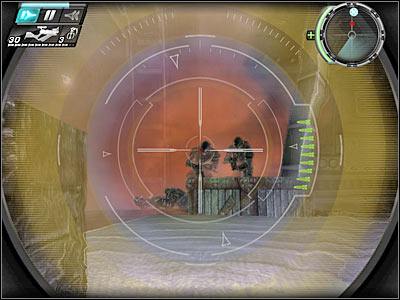 Your main objective here will be to reach a small checkpoint. Go inside and turn left. You will come across a small control panel with only one knob (screen). Save your game before you decide to use it. Turn the knob and activate slow-motion (you can't stop the flow of time entirely). Leave this area and start running towards the hanger, because that's where you'll find the jet. 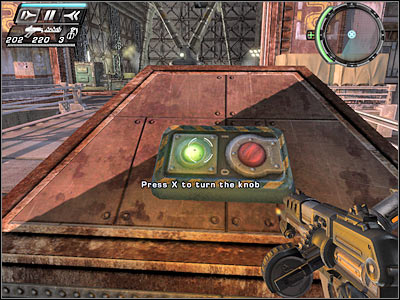 Move to your left and perform several jumps in order to climb on top of one of the smaller crates. Remember that you can't lose too much time here. Head on towards the jet. Use the stairs (screen) in order to board the jet. You may deactivate slow-motion. Wait for the game to display a new cut-scene. After that, this mission will come to an end. 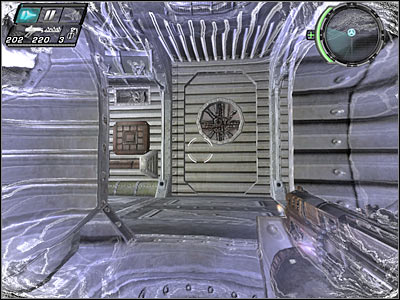