Your objective here will be to reach a small room (screen). Once you're there, wait for the game to give you new orders.

As you've probably suspected, you will have to approach a small console. Read the instructions before you decide to move on. You should also save your game here.

New mission objective: Proceed past security and exit the facility 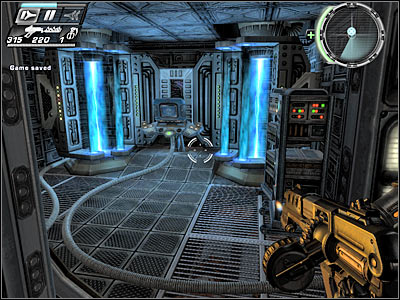 Press the button and turn around. Just as before, you will have to avoid laser beams. Despite what you might think, you don't have to be in a lot of hurry. Once you've gone past the traps, go back to the elevator shaft. The elevator itself is disabled, so you will have to head on to a nearby ladder (screen). Make sure that you've saved your game before you decide to use the ladder. 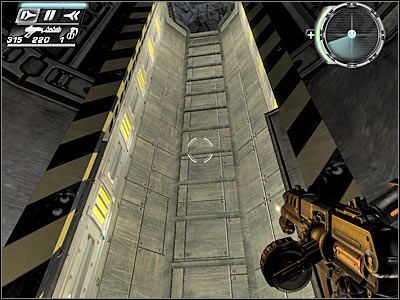 Start moving upwards. Once you've reached a new platform, you will finally have to deal with a new type of an opponent (screen). He will be using a similar suit to yours which will allow him to teleport anywhere he wants. Make sure that you're using one of your more powerful guns. 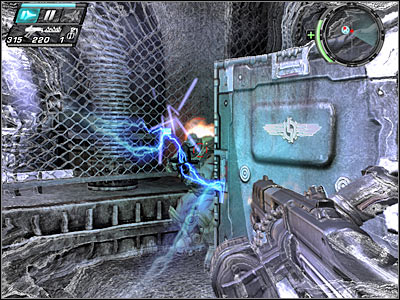 I wouldn't recommend leaving this area. Instead, wait for this opponent to come to you. Despite what you might think, you shouldn't have any major problems killing him. Make sure that you're looking at the compass. Once you've seen a red dot, make a turn, so you'll be facing that area. This is considered to be a warning, so you'll know where he'll appear next. Once you see him, stop the time and start shooting at him. Obviously you should be aiming at his head, so you'll make sure that you've killed him. 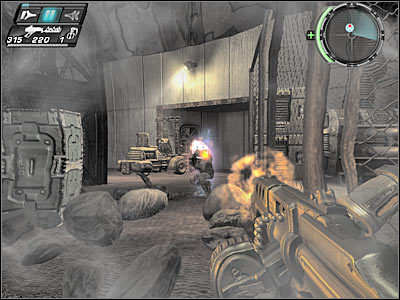 You will have to repel several of these attacks. Once you get the hang of it, you should be able to get rid of the soldiers quickly. Just make sure that you're not moving while trying to find them. Once they're gone, be sure to check their bodies. They will be using completely new weapons - Surge Guns. I would recommend exchanging one of these guns for a machine gun, especially if you're carrying a Hell-Fire as your third weapon (obviously you shouldn't drop a crossbow). A small group of "standard" soldiers will appear in this area. Use the crossbow to kill them. It shouldn't be too hard, especially since they're using weak weapons. 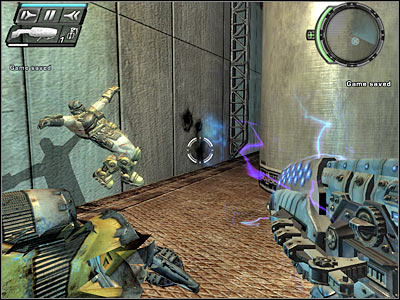 Start moving towards a designated area of the map. Once you're close enough to the elevator, stop your character because some large boulders will fall from the ceiling. Enter the elevator and wait for it to start moving. This is the end of the mission. 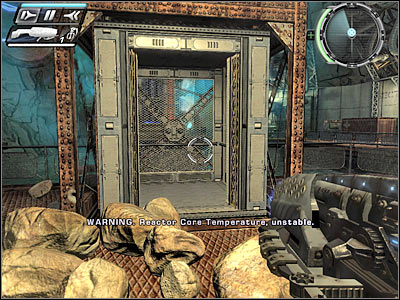