Lean out and take out all enemy soldiers. Start moving forward. Now you will have to watch out for several platforms. They are currently occupying upper floors. Use the crossbow or the sniper rifle to kill them. You should consider activating slow-motion. Keep going straight. Eventually you'll come across a new ladder (screen). Use it. 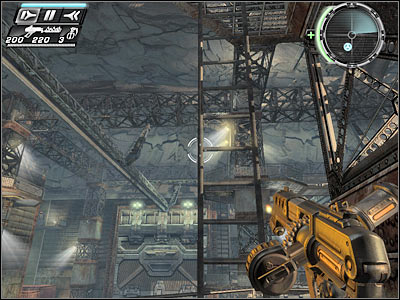 Once you're standing on a new platform, start moving towards a large pillar which can be found near the glass rooms. You'll find a new ladder there. This time you will have to go down. Your objective here will be to reach a new platform (screen). Save your game before you decide to move any further. 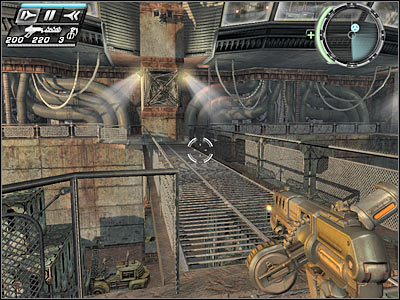 Start off by moving straight ahead. Next, you will have to turn right. You should be able to find a ladder here. Look at my screen if you're having some difficulties spotting it. Use the ladder in order to reach an upper level. 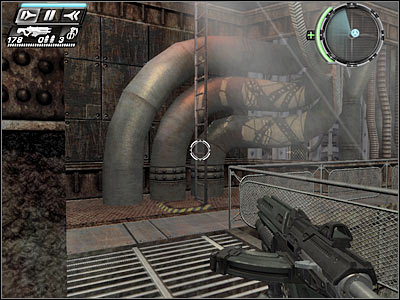 Eventually you'll end up standing inside a new control room. You won't encounter any enemy units here. Nevertheless, you should consider saving your current progress. Head on to the main console and press one of the buttons. You will be rewarded with a short cut-scene. As you've probably, new enemy soldiers have appeared inside the warehouse. We'll have to deal with them very soon. You should also check your task bar, because you'll receive a new objective. 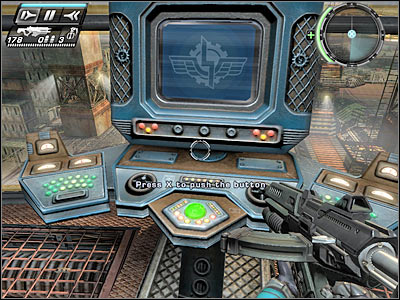 Head on to the left door. This time you will have to avoid getting electrocuted, so you must move back quickly once you've seen the lighting bolts. You may enter this corridor again, this time without any unpleasant surprises. Head on to the right door. It will allow you to go back to the warehouse. If you're patient enough, you can try killing new enemy units from here. Sadly, it's not going to be easy, because they're fast even if you decide to turn on slow-motion. 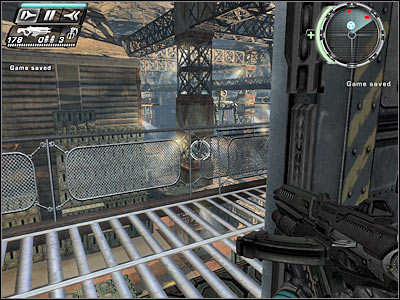 If you don't want to waste too much time here, use two nearby ladders. As a result, you will end up standing on the ground. Activate slow-motion and try to kill at least a few soldiers. Don't worry about their attacks, because you won't lose too much health here. You should also remember to use more powerful guns against them. Choosing a Hell-Fire seems like a good idea. 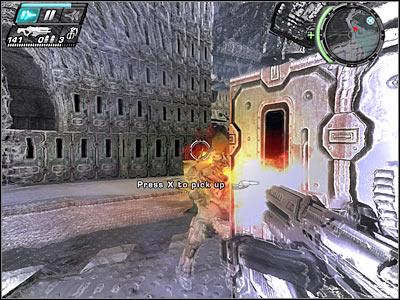 Now you will have to go through almost an entire warehouse. Thankfully, you won't have to be in a lot of hurry. Start moving towards your first designated area. You will have to observe your compass in order to defend yourself against enemy attacks. Make sure that you're using slow-motion. Otherwise you wouldn't have any chances of killing these guys. Each time you must focus on one target. Try avoiding having to fight more of them at the same time. 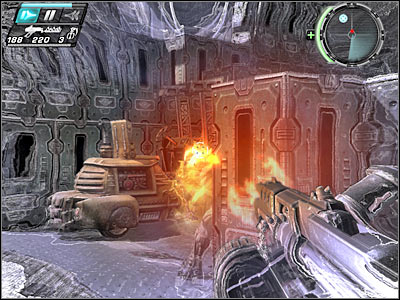