You should receive new orders from the commanding officer. He will want you to advance towards the base, while the rest of the team will provide covering fire. You won't have to follow his instructions right away. Make sure that you've killed most of the enemy units in the first place. Once you're ready, head on to a small hill. That's where you've neutralized the cannon. Be careful, though. There's a mine here and you have to avoid it or destroy it. 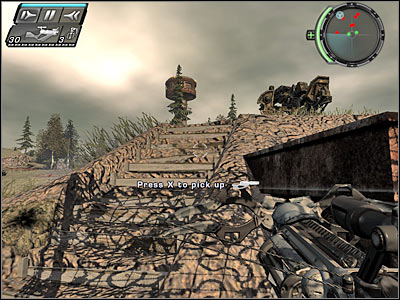 I'd strongly recommend using a nearby cannon, especially since there are some soldiers with energy shields to your right (screen). Start shooting at them. Make sure that you're aiming at their legs, however the cannon is quite powerful, so eventually you would get rid of them. Next up, we have a soldier with a rocker launcher. Once he's gone, deal with the remaining troops. Try securing this entire area. Leave the cannon and save your current game. 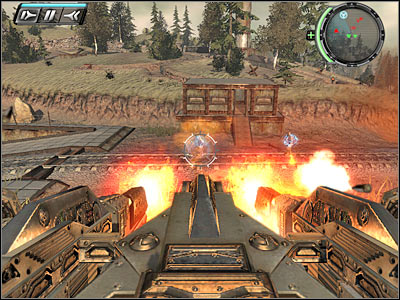 Now you should start running towards a small building (screen). If you're not so sure about securing this area, consider using a slow-motion feature in order to avoid enemy fire. You'll find a weapon crate inside. Save your game here and head on to an opposite exit. This passageway leads to a nearby hill. 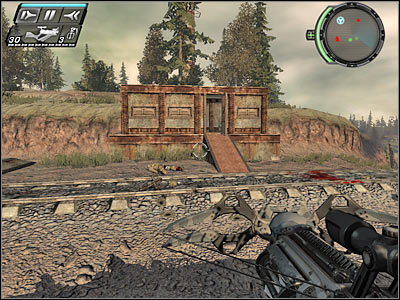 Keep moving forward. You will probably encounter several soldiers along the way, however you won't have to worry about them too much. Exit the trenches and head on to a designated area of the map (screen). You'll find an opened hatch. There's also a ladder here. Save your game before you decide to use it. 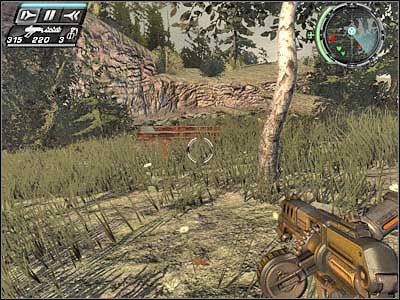 Once you're inside this underground facility, choose a machine gun from your inventory. You are going to be attacked by a soldier with an energy shield, however you may be able to get rid of him quickly. Start shooting at some of the nearby explosive objects and he'll die almost instantly. Take his weapon and wait for the game to display a new mission objective.

New mission objective: Find your way deeper into the complex 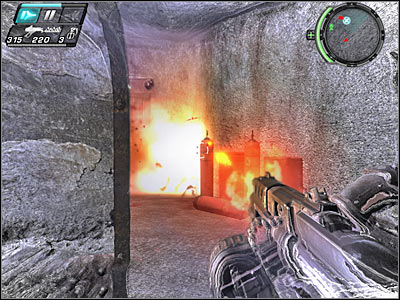 Head on to a nearby door. Use the stairs to get to the upper level. You shouldn't encounter any new units in this room, so go ahead and proceed to the next door. Once again, you will have to use the stairs. Open the door and kill several enemy units. It would be wise to use a Hell-Fire machine gun against them. It's very effective and you won't have to waste too many bullets. 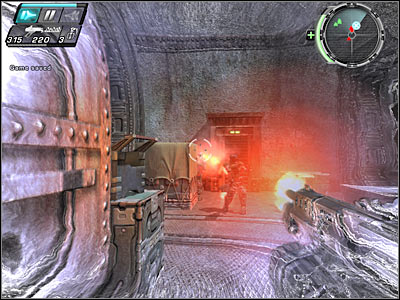 Head on to the next door and use the stairs to go to the upper level. Turn right here and open a new door. Use the stairs once again. You will find yourself standing in a new corridor (screen). Kill enemy soldiers. There's only going to be two of them, however save your game once they're gone, because you'll take part in more difficult challenges very soon. 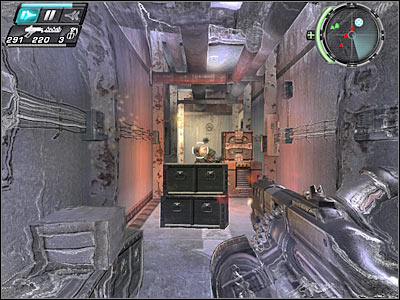 Make a few steps forward. At first you will only kill one soldier, but more of them will arrive from the right. Move back to a safe distance, because a lot of these guys will be using energy shields. The easiest way to get rid of them would be to use a grenade launcher or a rocket launcher. Make sure to take their weapons. 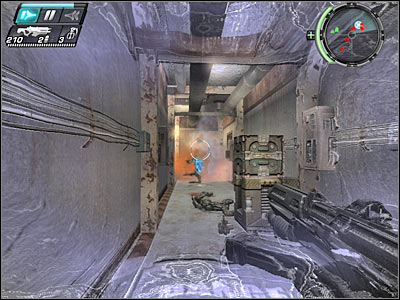 Open the door and head to a new room. I'd strongly recommend crouching here. This will allow you to surprise some of the enemy soldiers. Turn right and start moving forward. After that, turn left and hide behind the nearest carriage. You should be able to take out all enemy soldiers from here. 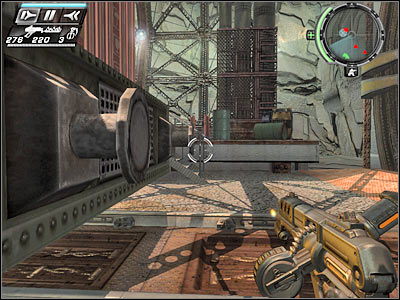 Killing the first soldier is going to be very easy. Just make sure that you're aiming at explosive barrels. As for the rest of them, you should be using a crossbow. Start moving forward and head on to a train carriage. Use a lever, so you'll start moving. Once you're inside a new tunnel, this mission will come to an end. You'll also be rewarded with a short FMV sequence. 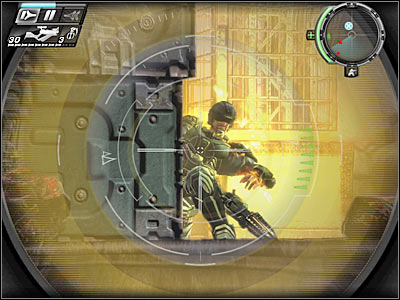