The first thing that has to be done here is to eliminate several opponents. Leave the quad and use the sniper rifle or the crossbow to kill them. Be careful, though. There's an enemy sniper to your left. DON'T go there. Instead, try hiding behind one of the available pillars. You will be informed that a Sentry is heading your way. It's a mech and can't fight it from here and without proper equipment. Save your game and wait for this objective to be displayed on your screen. 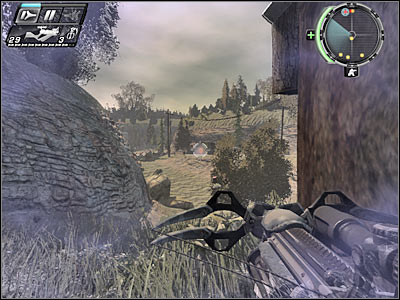 You shouldn't be standing in the open for obvious reasons. Instead, try moving to your left. Before you're going to deal with the Sentry, you should try killing all visible soldiers. Most of them will be standing next to the Sentry, so you've got to be careful. Thankfully, you won't have to worry about Sentry moving your way. It'll stay there and it won't move. 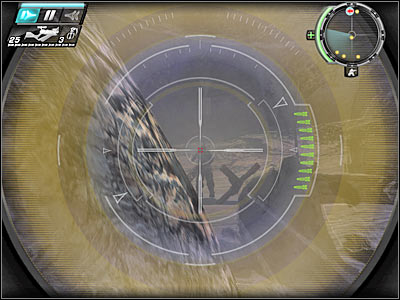 Now you'll have to risk your life in order to succeed in getting rid of the Sentry. Go back to the quad. Start moving forward. You should stay on the main road. Don't even think about finding any shortcuts. You're going to be attacked by the Sentry, so use a slow-motion feature in order to avoid these explosions. Keep moving towards the Sentry. 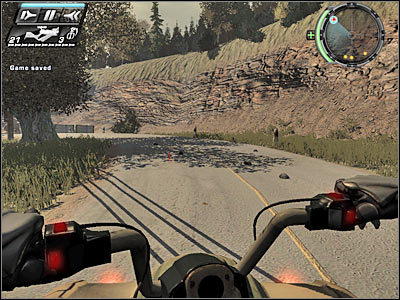 Keep going straight, however you must turn right once you're close enough to a large truck. I assume that you're still using slow-motion. Head on to the back of the truck. You'll find a rocket launcher there and you must take it. I'd recommend exchanging it for the shotgun or the E.M.F. Cannon. Also, make sure that no one (except for the Sentry) is in this area. Save your game. 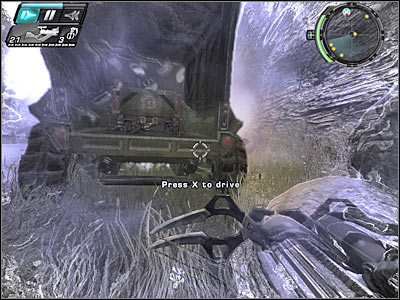 Destroying the Sentry is going to be very simple. First of all, you will have to exit the truck. After that, activate the slow-motion feature and start shooting at the Sentry with a rocket launcher. Once you've run out of rockets (or power), go back to the truck in order to resupply. You will have to hit the Sentry at least several times in order to get rid of it. Go there now. 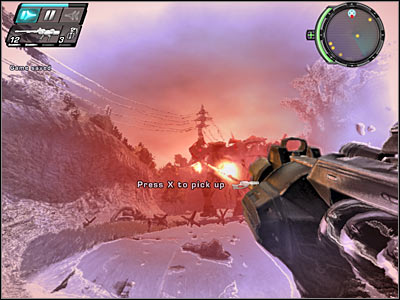 You can't go straight, so turn right and leave the asphalt road. Keep moving forward. You shouldn't have any problems finding a new transport. Use your newly acquired atv. You will have to turn right. Activate nitro here, so you'll be allowed to reach your destination. Keep going straight. Stop the vehicle once you're close enough to the junction. Save your current progress here. 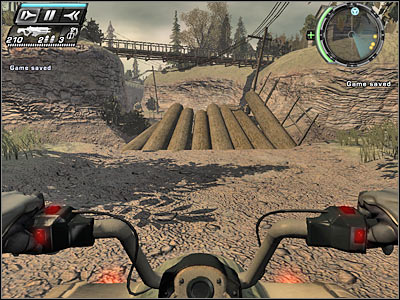 I'd strongly recommend hiding behind a fallen tree. It can be found to your left. There are some enemy soldiers in this area. Go ahead and start shooting at them. Make sure that you don't expose yourself too much, because most of the enemy units are equipped with crossbows. You will also have to neutralize a heavy machine gun post. It's to your right, near the rocks. 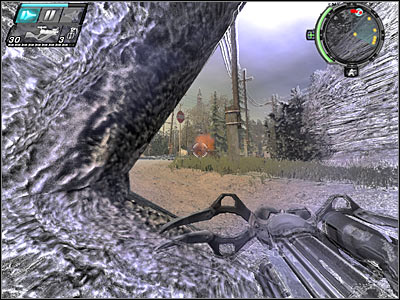 You should also know that at least two enemy soldiers will try to advance towards your position. It would be wise to use a rocket launcher to get rid of them quickly. Once they're gone, start moving towards a small campsite. You should also consider saving your game here, however you won't take part in any difficult fights for at least a few minutes. 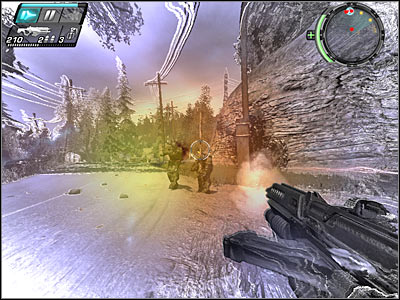