Obviously you'll start the game inside the tunnel. Wait for the game to display a new objective for you. Read it carefully.

You won't have to use the train, so leave it here and start moving forward. Head on to a small door which can be found to your right. You'll end up inside a second tunnel. You'll probably notice a small group of enemy soldiers (screen). Choose a crossbow or a sniper rifle from your inventory and get ready to attack them. 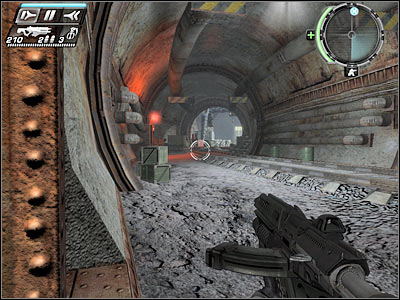 As you've probably noticed, there are some explosive barrels in this area. Destroy one of these objects in order to get rid of 2-3 enemy soldiers. After that, attack the rest of them. You should have plenty of projectiles for your crossbow, so you won't have to get near them. Just make sure that you avoided most of their attacks and don't let anyone get closer. You shouldn't have any major problems killing all hostile units. 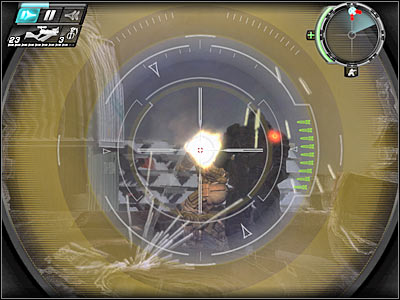 You are going to be attacked by a second group very soon (screen). I'd still recommend hiding near the left wall of the tunnel, so you won't have to deal with them personally. You should also consider using your powers to gain advantage over them. Keep heading towards your current destination. 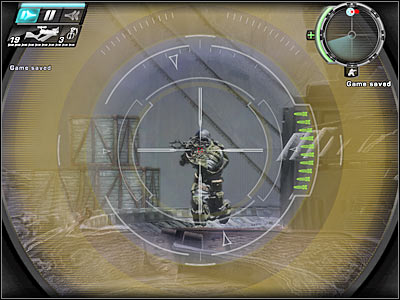 Once you're close enough to the underground bridge, you will have to locate a new set of explosive barrels. Kill all enemy soldiers and proceed forward. There's an ammo crate to your right (screen). I'd strongly recommend going there right away, because you'll need all the ammo you can get, especially for more powerful weapons. Move closer to the bridge and save your game. 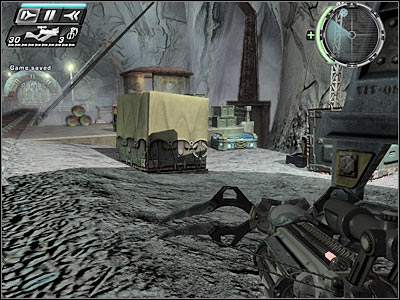 Now you will have to defend two other soldiers. They're equipped with jetpacks, so you must be careful. Nevertheless, you shouldn't have any major problems defeating them, especially if you decide to use a slow-motion feature while fighting them. Move closer to the bridge and save your game once again. It's very important, because you can die here easily. 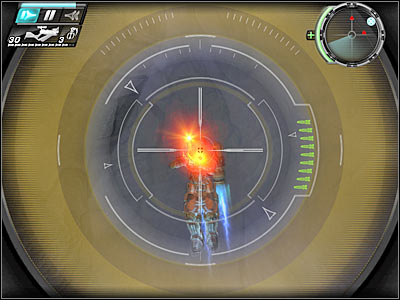 Make sure that you're ready. Start moving forward. Once you're about half way through, you will receive a warning that a train is heading your way. Activate slow-motion and start moving back to your original position. Don't even think about going forward, because you wouldn't have enough time to avoid the train. Wait for the train to get past you and go back to the bridge. This time you'll be able to reach a new area safely. 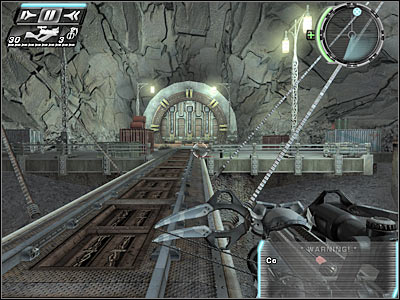 Before you decide to head on to a new tunnel, MAKE SURE that you have saved your game. You will also have to wait for you power bar to replenish itself. There are some lockers in this area. Observe these objects, because that's where you'll meet a new type of an opponent. As you've probably suspected, you won't be able to defeat these guys unless you've used your powers. 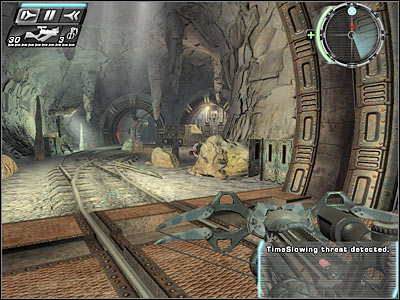 The fight itself is going to be quite simple. Whenever you see one of the soldiers moving your way, activate slow-motion. As a result, you will start moving at a similar speed, so you shouldn't have any problems aiming at your foes. Nevertheless, try killing them quickly, so you won't have to drain your power bar for too long. Use rocket launchers and shotguns. 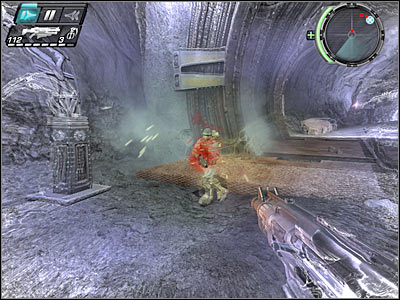 You will have to kill several of these soldiers. Once they're gone, inspect their bodies and you will find a new type of weapon. I'd strongly recommend exchanging it for your shotgun, because you're going to need a machine gun and a crossbow (and you can't have more than three weapons). It's an E.M.F. Cannon. Go ahead and test it on something. Don't worry about the ammunition, because you'll be allowed to resupply soon enough. Start moving forward. 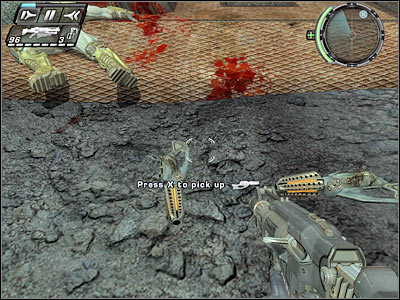 Start off by moving closer to the crossroads. Move to your right and inspect a glowing area. You'll find out that you're going to need explosives here.

New mission objective: Find the explosives and destroy the gate

Now you will have to head on to the left tunnel. You shouldn't encounter any enemy units here, so you may even consider running. Head on to a new room which is going to be located to your right. You'll find an ammo crate here. As for the explosives, they're to your left (screen). 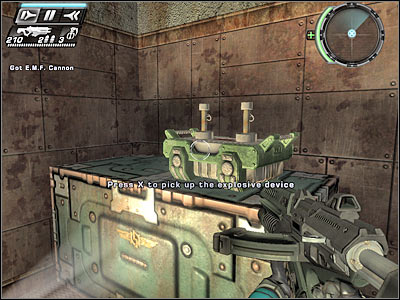