There are three enemy soldiers just around the corner. Killing them can be very easy. I'd strongly recommend using a grenade launcher against them (screen), however make sure that you have more grenades or a rocket launcher at your disposal. Turn around and move back to the gate. There's an enemy vehicle heading your way. Save the game! 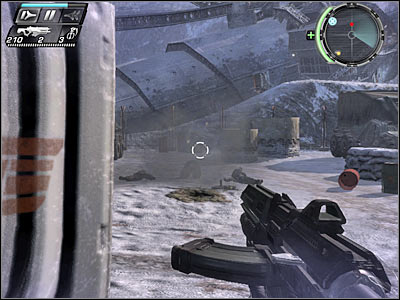 You should be able to see the vehicle very shortly. More enemy soldiers are using it to get to this area. I'd strongly recommend neutralizing the vehicle before it stops. Activate the slow-motion feature once the vehicle is close enough to your character. Now you should consider choosing a rocket launcher or a grenade launcher. Aim at your enemies (screen). The explosion should kill them instantly and they won't be able to defend themselves. As a result, you will only have to deal with the driver. Wait for new orders.

New mission objective: Navigate through the scaffolding to reach the enemy encampment 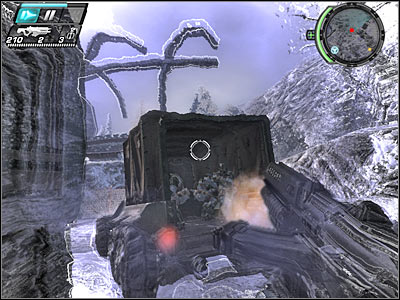 Now you will have to solve a more complex riddle. Your main objective here will be to reach the scaffolding. You can do this only be going back in time. Start off by moving towards a large wheel (screen). Press and hold the X key. Allow the elevator to move to the upper level. Release the X key. The elevator will go back to the ground level, but you shouldn't be worried about that. Proceed to the elevator and stand on it. 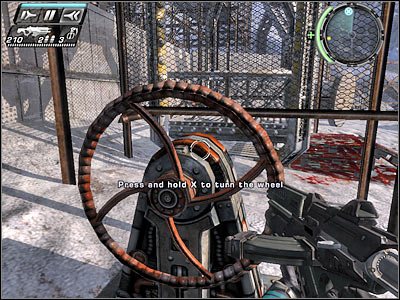 Now you will only have to use a reverse time feature. If you've done everything correctly, this elevator will go back to the upper floor on its own. Leave it as soon as possible, because the power bar is going to be depleted very soon. You'll find yourself on one of the lower levels of the scaffolding. Turn left and start moving forward. Save your game here. 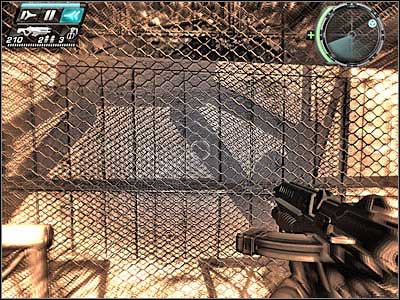 Turn right. You will have to use this platform in order to reach upper levels of the scaffolding. Proceed towards the crates. Use them to reach the ladder. I'm sure that you won't have any major problems here. You'll end up occupying one of the upper levels. Go straight ahead and then turn left. 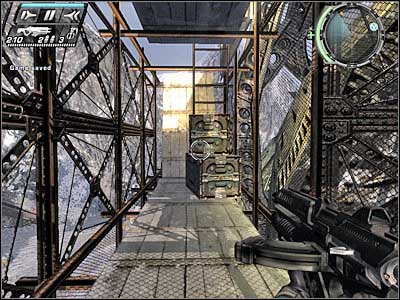 Once you've reached other set of crates, perform several jumps in order to end up standing near a gap (screen). You will have to jump down from this platform. Don't worry, because you'll end up in a new area. Jump down to the lower level once again. It's the only route leading to your current destination. 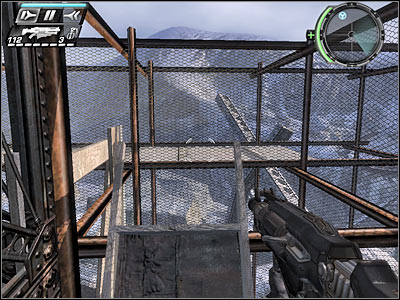 I'd strongly recommend that you wait here for a little while longer, because one of the enemy soldiers will show up in this area (screen). Kill him quickly. Once he's gone, use this platform to get to the upper level. Turn left and start moving forward. You should be able to reach a second ladder. Obviously you have to use it. 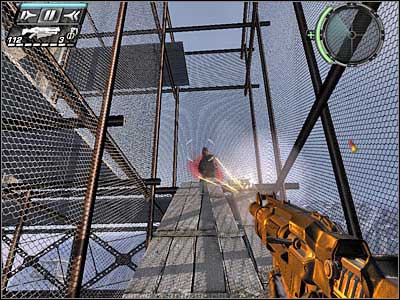 Once you've reached the opposite end of the platform, you will have to destroy a rope which holds a small bridge. Check my screen if you're having some difficulties finding this object. Performing this action will allow you to proceed to a new sniper tower. There's a rocket launcher here. It would be wise to pick it up. Use the ladder to get to the ground floor. Save your game. 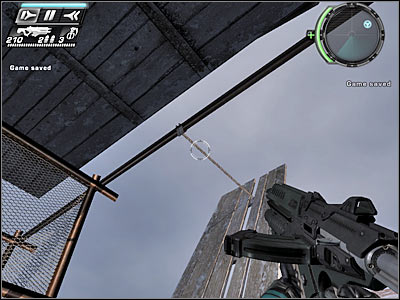