Head on to a nearby road. You will come across your first mine field. There are a lot of warning signs here, so you can't miss it. Thankfully, this is a very simple puzzle. All you have to do is to activate a time stop function. This will allow you to avoid all mines without getting killed. Make sure that you're using your quad to get through the field. 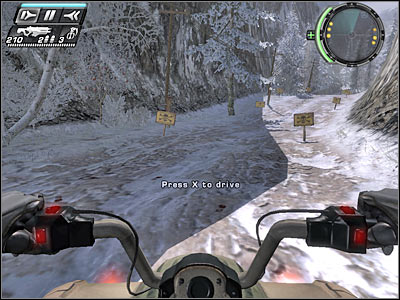 You should be able to reach a few concrete barriers. There's also an enemy encampment in this area. Leave your atv and move to the right. Your main objective here will be to take out an enemy sniper. Obviously he's occupying a watch tower. Use a slow motion feature in order to assure the success of your attack. 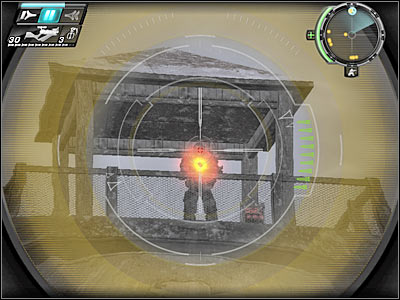 There's also a heavy machine gun post in this area. Take it out right away, especially since the gunner could have pinned you down. You should also know that at least two soldiers are heading your way (screen). Kill them as well. Now you will have to focus on killing enemies within the encampment. Thankfully, there's a large nt separating you from each other, so they won't be able to approach you. Use your crossbow to kill them, especially since you should have plenty of projectiles at your disposal. 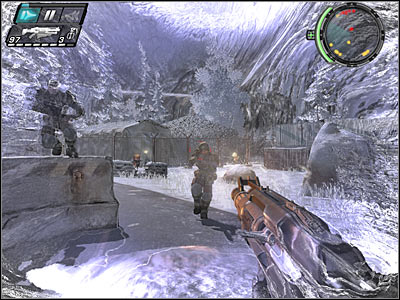 The next phase of this battle will require you to move forward. Otherwise you wouldn't be able to find (and kill) all enemy soldiers. You shouldn't have any major problems here. Nevertheless, I wouldn't recommend leaving concrete barriers unless you're absolutely sure that the area is safe. Once all the enemies are gone, head on to your right. 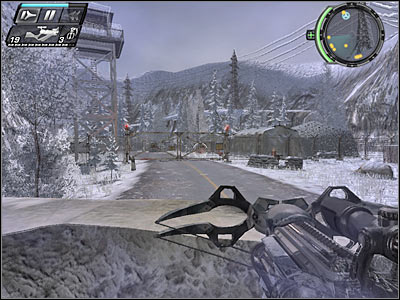 You will have to approach several large containers. There's a moving platform here. Make sure that you're standing on it (screen). You will have to move forward. After that, activate a time stop function, so you will be allowed to make a jump towards one of the containers. Perform several others jumps there. Your main objective here will be to jump over the fence. Once you're inside the camp, you will receive a new task. 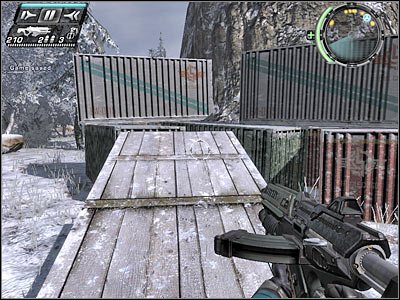 The switching controlling the gate is located at the top of the watch tower. Before you go there, you should consider exploring both tents. You'll find a lot of ammunition inside these objects. Once you're ready, use the ladder to reach the top of the tower. Approach the lever. Before you decide to use it, choose a crossbow and save your game. 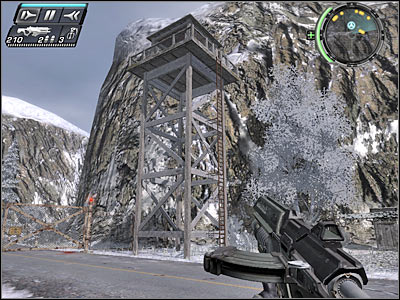 Pull the lever. You will probably notice that an enemy vehicle is heading towards the camp. Use the crossbow and zoom in on the vehicle. Activate one of your time powers and fire a projectile at one of the yellow barrels. As a result, you will witness a huge explosion (screen). Use the ladder. Once you're safely on the ground, head on to one of the nearby atv's. 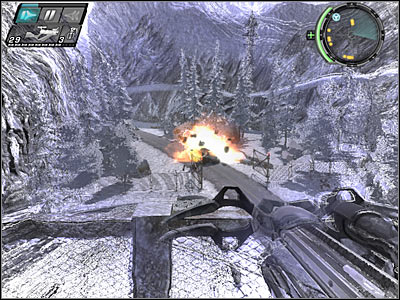 Use the atv to leave this camp. Start moving forward. You will come across a new bridge very soon. Use your nitro here in order to perform a successful jump across the abyss. You won't have to activate any of your powers here. Once you've landed, keep heading towards your current destination. You should save your game once you've reached a new tunnel. 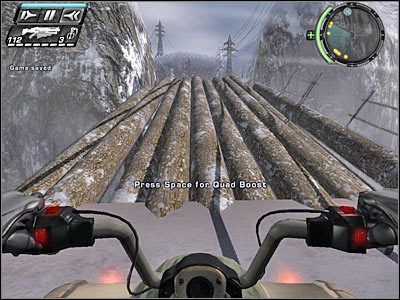 It's to going to be your final puzzle for this particular mission. Once you've reached a turn, you will probably notice that the area is flooded. Use a nitro. Once you're still in the air, activate a time stop function. This will allow you to land on the surface, instead of drowning. Once you've escaped this trap, you will be allowed to proceed with the next mission of the campaign. 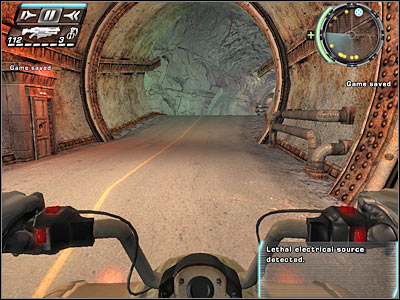