You should try surprising some of the nearby enemy soldiers. Your top priority here is the guy using a heavy machine gun post. Also, make sure that no one takes his place once he's been eliminated. Kill a few other soldiers and try moving closer to an armored vehicle. Don't forget to save your game from time to time. 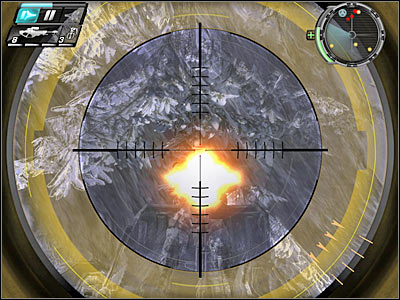 You will probably notice a second group in a distance. The easiest way to get rid of them would be to use a sniper rifle. Alternatively, you could try mounting a heavy machine gun, because you probably didn't destroy the vehicle. Either way, you will have to secure this road. Once this is done, go back to your atv. 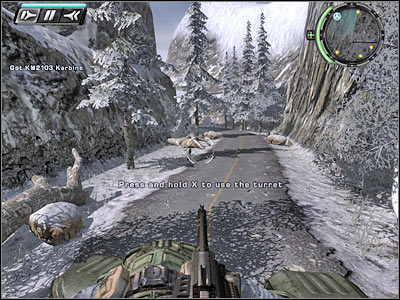 You may proceed to your current destination. You'll probably notice an enemy gunship on your way to the top of the hill, but thankfully you won't have to worry about it. Keep heading towards a small checkpoint. Once you're close enough, leave your quad and start moving towards the train tracks. 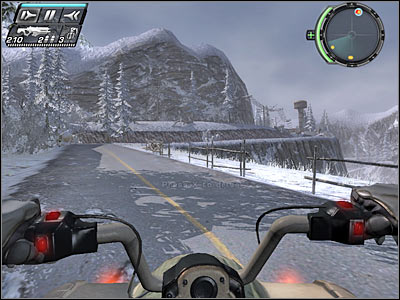 Make sure that you've reached the top of this hill. You should stop your character once you're close enough to the semaphore. The first group will probably appear to your left (screen). Start running towards them and hide behind the nearest carriage. Kill your opponents from here. Reload your weapon and save the game. 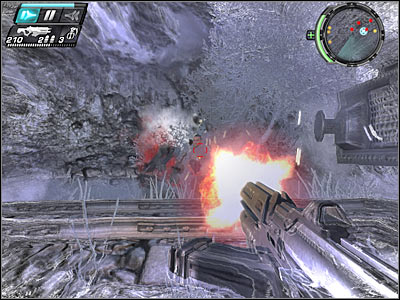 You will have to be careful, because more enemy units will arrive in this area very soon. Thankfully, you'll be able to spot them with a little help from your compass. Make sure that you've killed all of them. Once this is done, move towards the bridge (screen). Ignore the tower to your right. Instead, head on to an atv. Use it. 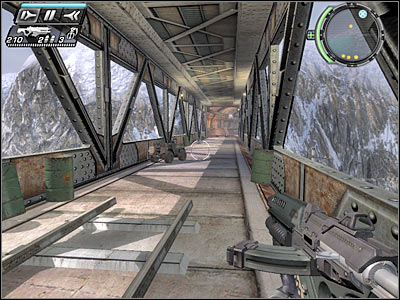 You will have to use your quad in order to enter a new tunnel. Stop the vehicle once you're close to the opposite end of the tunnel. You should be crouching here, because this will allow you to surprise some of the nearby enemy units. You will have to neutralize two groups. There are some engineers in front of you. As for the second group, a small group of soldiers will be standing to your left. It would be wise to use a grenade launcher here. Also, you can hide behind the left wall of the tunnel. 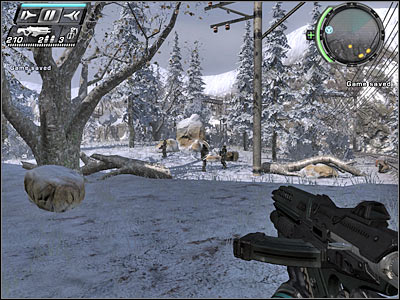 Once you've defeated your opponents, make sure that you've collected ammunition from their dead bodies. One of the soldiers was probably carrying a new type of weapon - ThunderBolt. It's a crossbow, however the main difference is that it's equipped with exploding projectiles. You won't have too many projectiles to start with, but nevertheless you should consider exchanging it for your sniper rifle. Go back to the atv and save your game. 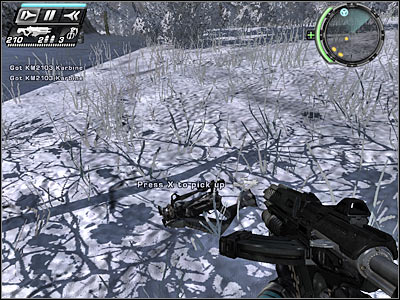 You should consider leaving the train tracks and turning left. Keep heading forward. You should be able to get closer to a much larger encampment. Leave your vehicle here and start moving towards a small hill. You could also attack this base from the back. You would have to use the train tracks. After that, you would have to turn left. Choosing this hill will allow you to surprise enemy soldiers, so you should stick with this choice. Save your game before you fire any bullets. 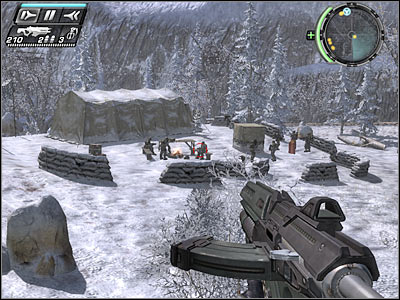