Try opening the door. Start off by killing one enemy soldier. Once he's gone, move back to a safe distance, because more enemy units will appear in front of you (screen). If you have enough power at your disposal, you should consider stopping the flow of time in order to get rid of them. Once they're gone, open the door once again and deal with the only remaining soldier. He will be guarding an opposite balcony. 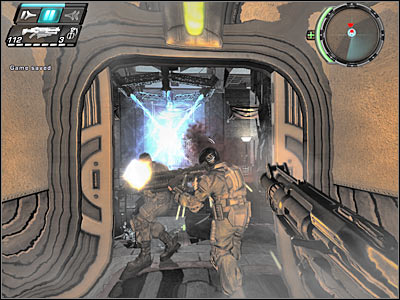 Also, you should notice that a small group of enemy soldiers is patrolling the area beneath you. I'm sure that you won't have any problems killing them, especially since they'll have some problems responding to your attacks. You can also use a slow-motion feature to make this battle even easier. Collect the ammunition and go to your left. You should also save your game here. 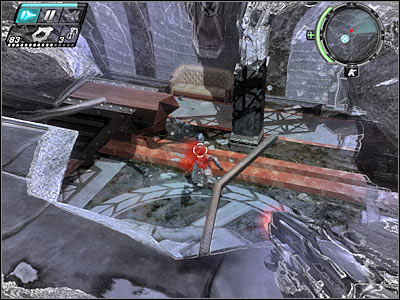 You should be careful here. One of the enemy soldiers will exit the left room (screen). Use the slow-motion or a time stop feature to get rid of him without receiving any major injuries. Head on to the left room. After that, proceed to the next one. Don't open this new door. Instead, reload your weapon and save the game. 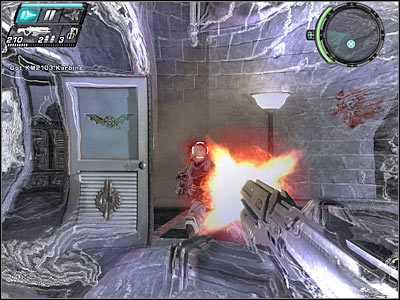 The next room is being guarded by a large group of enemy soldiers. You can get rid of them quite easily - by using a grenade launcher or one of the standard grenades. If you don't have any of these objects, try killing a few of them and then retreat to the previous room. Once they're gone, head on to a much larger door (screen). Save your current progress here. 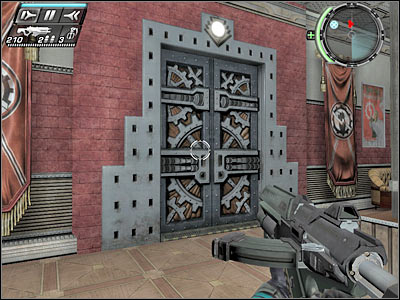 I'm sure that you won't be surprised by the fact that there are a lot of enemy soldiers inside this room. Once again, you should consider using a grenade launcher. You could also stop time and kill them with your shotgun. Either way, you will have to secure this room. Once this is done, enter it and collect much needed ammunition. 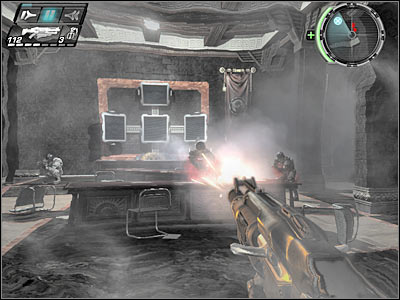 Now you will have to approach the central computer. I'm sure that you won't have any problems finding it. Use the knob in order to fulfill one of the current mission objectives. Be careful, though. The door on your left will open and more enemy soldiers will appear there. Kill them as soon as possible. Once this is done, familiarize yourself with a new task.

New mission objective: Proceed to the rooftop for exfiltration 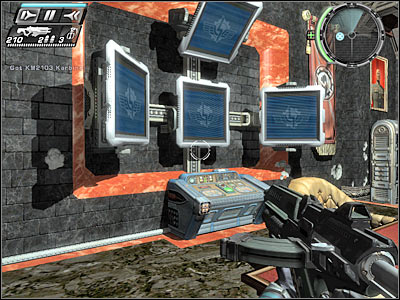 Obviously you will have to use this new door, because it's the only passageway leading to your current destination. You should be able to reach an elevator very soon (screen). SAVE your game here. It's very important, because there's a strong possibility that you may die here. Enter the left elevator and turn around, so you'll be facing the elevator door. 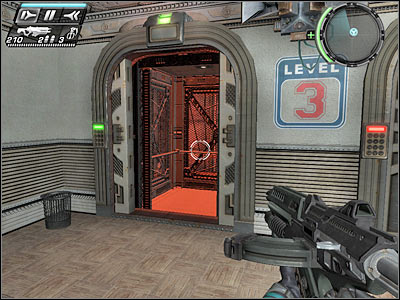 Sadly, this elevator won't close. Instead, it'll start moving rapidly towards the ground. Stay here, but get ready to act quickly. The elevator should stop near the lower floor, but only for a second. As a result, you will have to activate a time stop function immediately. Exit the elevator and turn off your suit. You may consider turning around in order to witness a huge explosion. 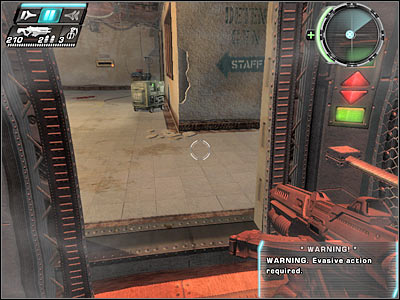 There's a single worker to your left. He will be hostile, so you must kill him before he reaches for his weapon. You could also enter a nearby security checkpoint by breaking the glass. You would find some ammo inside. Don't worry about the nearby security system, because it won't attack you. Once you're ready, head on to the second elevator (screen). That's it for this mission. 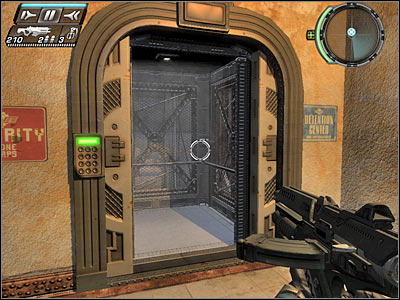