The next group will appear in front of you. Thankfully, there's a large distance separating you from each other, so you should be able to kill them without risking too much. You won't have to go right, because it's a dead end. Instead, head on straight. You will come across a few other soldiers here, but it's going to be fairly easy to kill them. Collect some ammunition. It can be found mostly near dead bodies. 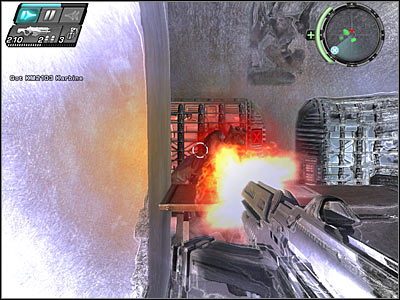 Your next task here will be to go right, because it's the only corridor leading to your current objective. You won't encounter any other enemy units here, so you won't have to hide behind walls. You will come across a lever along the way. Don't use it, because you won't have to go back to the previous cells. Listen to a short radio transmission. Once you've reached a new area (screen), SAVE your game and make sure that the power bar is at full capacity. 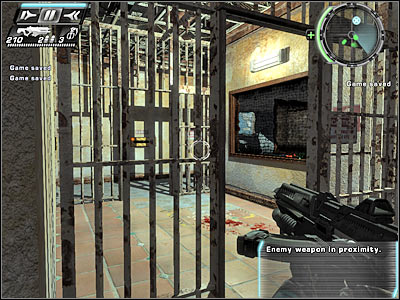 Your goal here will be to avoid some of the security systems of the prison. These objects will react to movement, so you will have to use slow-motion effects in order to succeed. Start running forward and turn right after a short while. Don't worry about the gratings being closed. Just make sure that you don't end up inside one of these traps. Turn left and stop there (screen). Once again, you should consider saving your game. 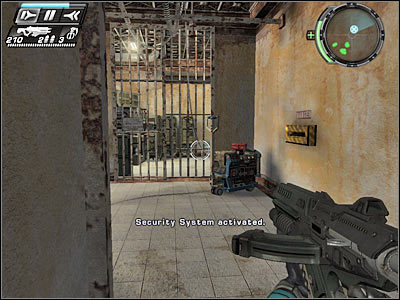 You will have to slow down the flow of time here. This time you must run towards the left corridor. After that, turn right and make a few steps forward. You may exit this mode, because you're safe here. Ignore the closed door. You will have to use some of the nearby objects (screen) in order to enter a new ventilation shaft. 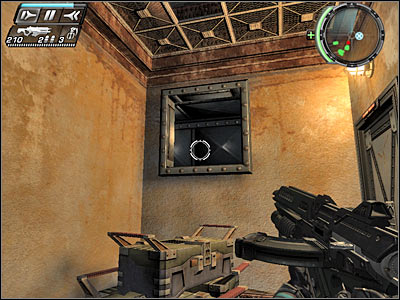 Once you're inside the shaft, turn right. You're getting closer to a security station. Sadly, you can't use a weapon while you're inside the shaft. Activate one of the modes of the suit and exit the shaft. There's a single enemy soldier here. Kill him or take his weapon. Now you will have to find a knob. Use it. If you can't find the knob, try moving the body of the dead soldier. 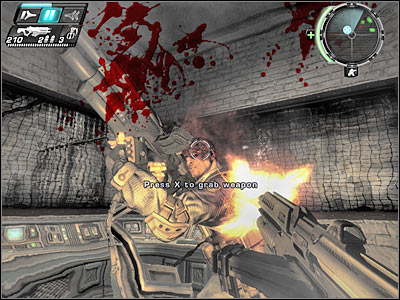 Once you've used the knob, head on to the door on your right. Go back to the previous corridor. You won't have to worry about the turrets. As you've probably noticed, you can go the left room (screen). Open the door there and enter a new corridor. Once you've reached a staircase, this mission will come to an end. 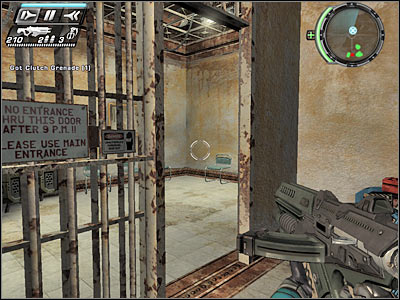