You may leave this area, so head on to the ground level. Once you're there, turn left and start moving towards your current target. Make sure that you're using compass here, because you weren't able to kill at least one soldier from the large structure. Take a look at my screen, because that's where the enemies should be hiding. Kill them right away. 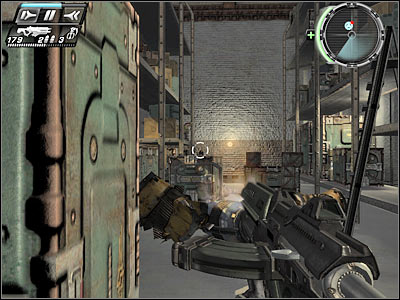 You will come across a weapon crate along the way. Your final objective here will be to reach a new lever. Pull it and look what happens. This is going to be a fairly easy task. As you've probably noticed, using the mechanism allows you to move the crates. You will have to pull the lever and wait for the crates to reveal a small entrance (screen). Use a time stop feature. Go there now and enter a dark tunnel. Once you're inside, save your game. 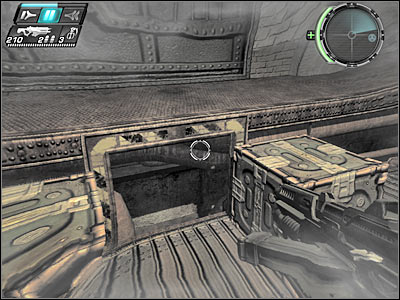 Like I've said before, you'll end up inside a small, dark tunnel. There's only one passageway leading to your current destination, so you can't get lost. Ignore the voices for the time being. Proceed to the lower level and keep going straight. You will come across a grate. Open it. You should notice two engineers. Kill them with a grenade launcher and save your game. 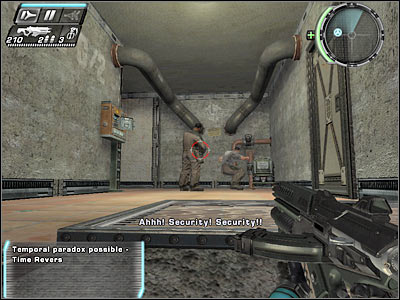 More enemy soldiers will arrive here very soon. They will be using the door to your right, so it would be a good idea to wait for them. Once they've opened the door, use one of your powers to kill them. Be careful, though. They're carrying powerful shotguns. You won't have go to their room, because you've already explored that area. Instead, head on to dead mechanics. 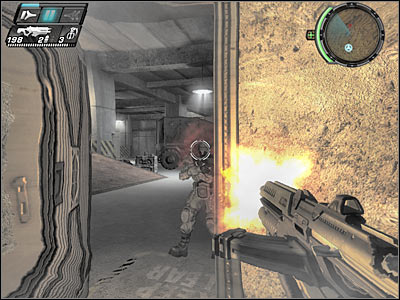 Now you will have to deal with the most difficult challenge so far. There are A LOT of laser beams in this corridor (screen). You can't touch any of them, because that would be equal to an instant death. Ignore a single opponent. Your job here will be to activate a time stop function at a correct moment. Obviously you won't be able to reach your target area right away, so you will have to divided this task into several segments. Make sure that you have saved your current progress before moving towards the first set of laser beams! 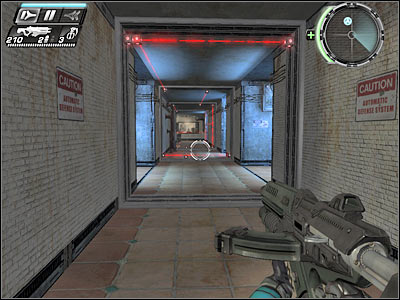 The first part of this challenge will require you to be very precise. There's a long walk ahead of you, so make sure that you didn't make any stops along the way. Wait for the lasers to be positioned near the roof or floor, so you won't have major problems avoiding them. You'll probably have to perform a few jumps along the way, but nothing more. You will have to choose the second gap to your right (screen). Once you're there, move away from the lasers and save your game. 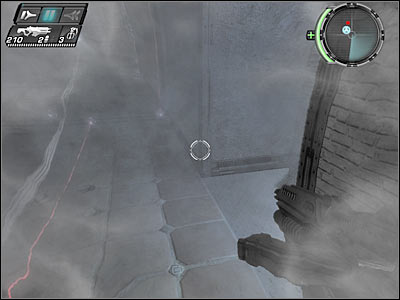