Go back to the main area of the garage. One of the enemy soldiers is occupying a new heavy machine gun post. He's to your left (screen). It would be a good idea to use a time stop feature here, so you won't have to risk anything while trying to kill him. Be careful. A second vehicle is coming your way. Perform a dodge manoeuvre in order to avoid being hit by the vehicle. Don't worry about it being destroyed. It was part of the plan. :-) 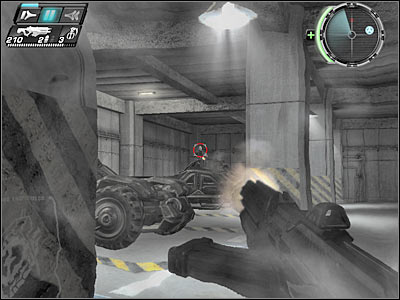 Keep shooting at the visible enemy soldiers. More of them will appear in this area, however you shouldn't have any major problems killing them. Just make sure that you're using a good cover. Pillars seem to be the best choice here. Your final task will be to neutralize a new armored vehicle. I wouldn't recommend trying to take out the gunner. Instead, use one of your grenades to blow up the entire vehicle (screen). Save your game here. 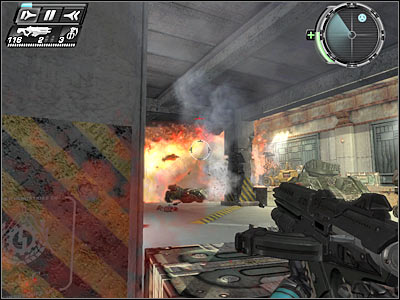 Now you will have to locate a large elevation point, because that's where you'll come across a lever (screen). You will have to solve a new puzzle here. Thankfully, it's going to be very simple. Start off by using the lever. This will allow one of the platforms to get here. Once this is done, save your current progress. 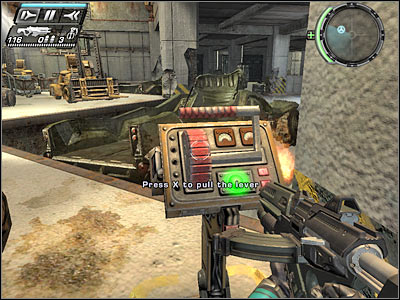 Use the lever once again, HOWEVER this time you will have to stop the flow of time completely. You also must be in a lot of hurry. There are some crates to your left. Start climbing on them in order to reach the highest crate. From here you'll be able to jump over to the moving mechanism. Turn off your suit and allow the platform to reach a new area of the garage. 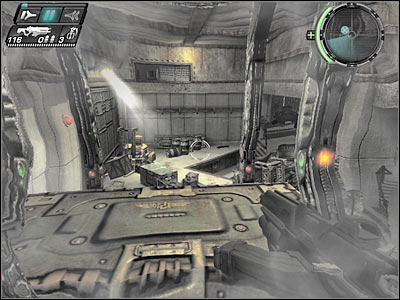 You will have to move over to the nearest ledge. Once you're there, turn left and head on to a small hole. This will allow you to enter a new warehouse. I'd strongly recommend that you keep quiet here, because it'll allow you to surprise some of the enemy soldiers. Once you're inside the warehouse, you will be given new orders. 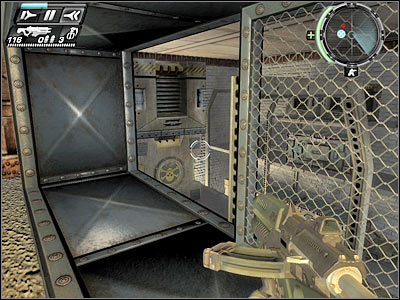 You should be standing on top of one of the warehouse structures. This is an excellent spot, because you'll be able to surprise some of the enemy soldiers from here. Start shooting at them. You could also move to your left in order to find more of them. Make sure that you're using the zoom feature for better aim. You won't have to worry about grenades or any other threats, so take your time and make sure that everyone has been killed. 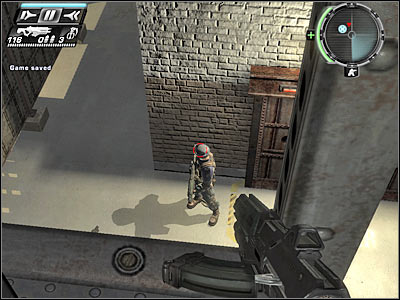