Now you will have to move to your right. There's a large lever on the right wall. As you've probably noticed, the lever deactivates the force field only for a short period of time. I'm guessing you already know what has to be done here. Pull the lever and activate a time stop mode at the same time. Exit the building quickly, turn left and start moving forward. You should end up between two active force fields. 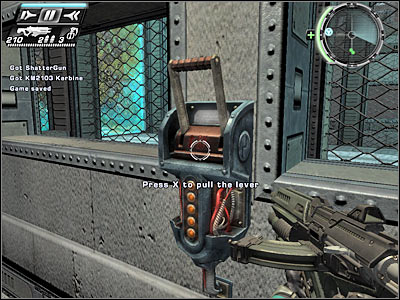 It's very important that you don't touch any of the activated force fields. Otherwise you would have lost a lot of health points. Head on to the second lever. It's located to your left. Pull it, activate your suit and move forward. You will end up near a small vehicle (screen). I'd strongly recommend saving your game here. You will also receive some new orders from the HQ. 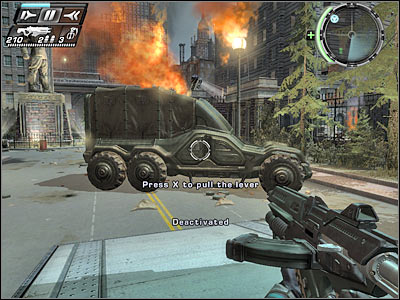 Make sure that you're using your compass here, because some of the enemy soldiers will probably try to attack you. Kill them all without receiving any major injuries. You will have to secure this entire area around the first vehicle. Don't worry about other enemy units. We'll deal with them soon enough. 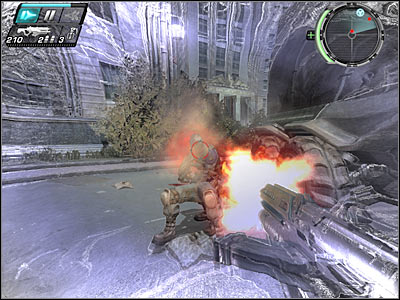 Now you should consider moving to your left. There are some more enemy soldiers there and it would be a good idea to get rid of them right away. Use the map all the time in order to find them. Now you should start running towards the second vehicle which is located to your left (screen). This will allow you to get closer to other groups of enemy units. SAVE your game here! 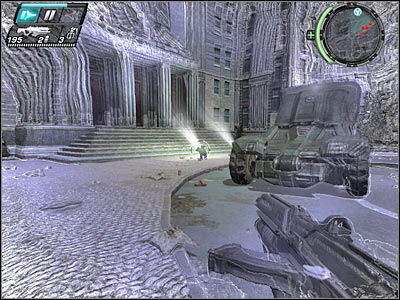 Just as before, you will have to acknowledge the fact that some enemies are dumb enough to attack you. Use your powers to increase your chances of killing them. Be careful, though. They will be advancing in larger groups, so you can't let them surround you. There's a third vehicle to the left. It would be a good idea to disable it with a grenade or a grenade launcher (screen). 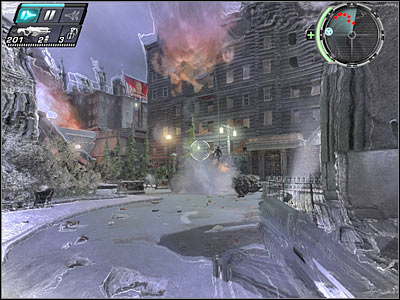 Once you've secured this entire area, you should consider running towards the third armored vehicle. There's a machine gun post on top of it and you should use it. Kill all of the remaining soldiers. Thankfully, there's going to be only a few of them. There's an ammo crate to your right. Use it and start moving towards your final goal area. 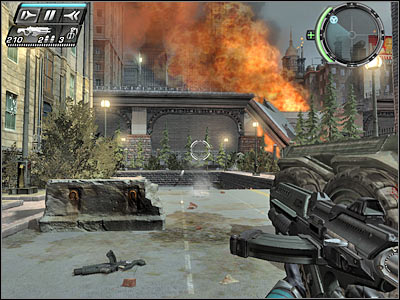 You shouldn't encounter any additional enemy units here. Once you've reached the entrance to the garage area, you will have to press a button in order to open a large gate (screen). Go inside and use the second console. It will allow you to complete this mission. 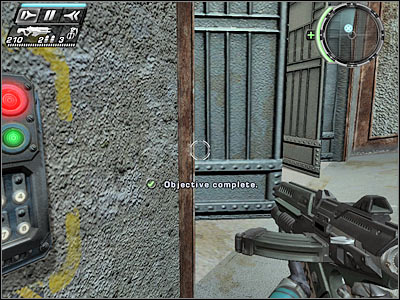