Enter this new area. Turn right and start moving forward. You will come across a new group of enemy soldiers very soon. Thankfully, there's not going to be too many of them. Once you've reached a new area, kill an enemy sniper. He is standing on a large balcony which can be found to your left (screen). 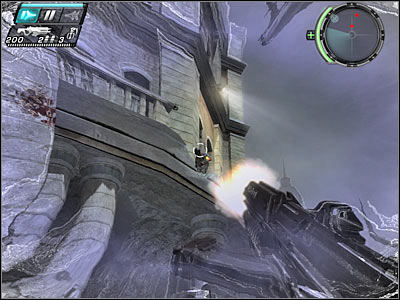 A second soldier will probably be standing in front of you. Try killing him as soon as possible and from a larger distance. Collect the ammunition, especially for the machine gun. Now you will have to head down to the pipes (screen). This is the only passageway leading to your current destination. 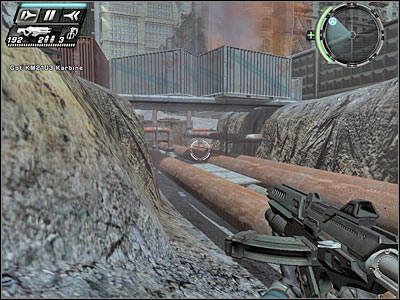 Keep moving forward. You won't encounter any enemy units here, so you won't have to use any of the nearby objects for cover. You will come across an elevator, but you won't be allowed to use it. Instead, head on to a nearby door. Once you're inside (screen), head on straight. You'll find a small ladder here. Use it and keep moving forward. 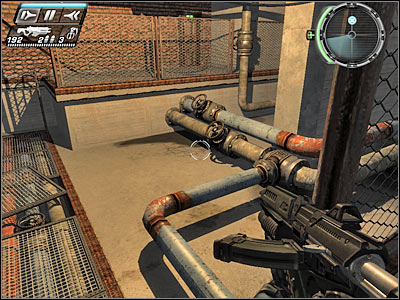 Your suit will probably inform you that this area is not safe. Head on to the next room. There's only passageway here, so you really can't get lost. Once you've arrived at your destination, you will have to talk to an Occupant soldier. He will warn you about the Sentry. You won't be able to destroy it, so you'll have to avoid its attacks. You'll also receive a new mission objective. 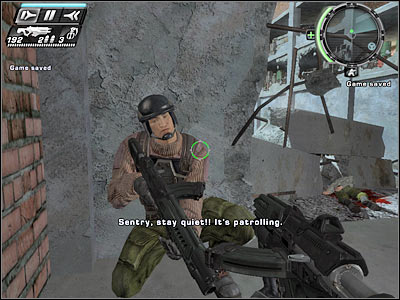 This particular task will require you to use some of the functions of your Beta Suit. You shouldn't have any major problems, however you must follow my exact instructions if you want to stay safe. Start off by moving to the right. Get ready to run. You will have to reach a new building which is located to your right. There's a large hole in the wall there (screen). Use a time stop feature in order to avoid being hit by the Sentry. 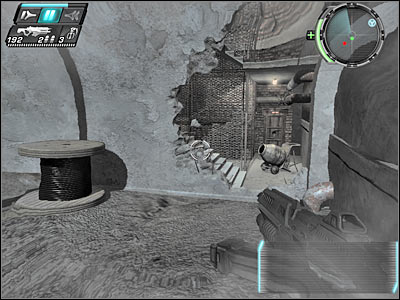 You'll probably run out of power once you've reached this new building. This means you have to act quickly. You can't stay in the open, because you would have lost a lot of health points. Use the stairs to get to the upper level. You can't stop here as well, because the Sentry is extremely powerful and its weapons will destroy most of the surrounding walls. Take a closer look at the screen, because that's where you'll have to stop. Wait for your power bar to replenish itself. 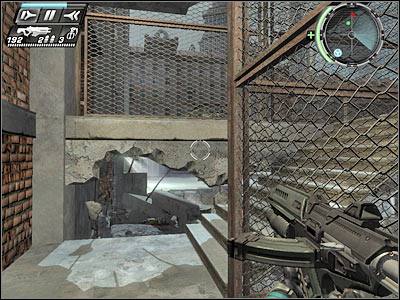 Once you're ready, start moving towards the upper level. This time you should be using a slow-motion feature. Don't worry about the exploding objects, because you shouldn't lose any health here. Just make sure that you don't perform any unwanted stops and you should be fine. Try hiding in one of the corners (screen). You should be safe here. Allow your bars to replenish themselves. 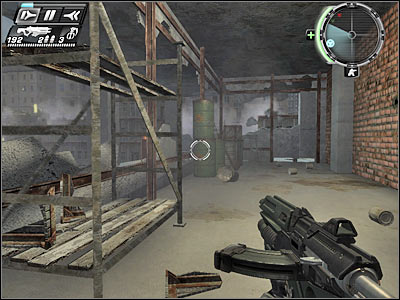